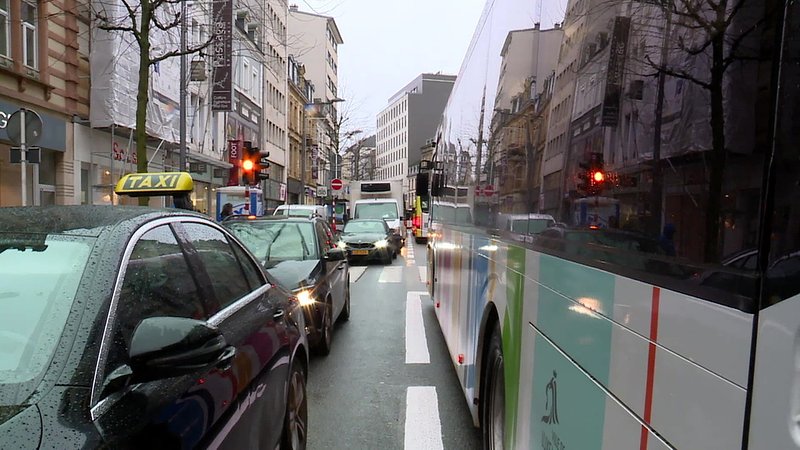 The start of the week brought traffic chaos to the area surrounding Luxembourg City's train station as a new phase in tram works began. The City of Luxembourg authorities have urged motorists to keep to the Highway Code to keep traffic issues to a minimum.

Luxembourg City municipal councillor Patrick Goldschmidt believes if motorists respected the Highway Code and kept key thoroughfares clear, then the 'difficult traffic situation' in the area would be broadly under control. Notably, Goldschmidt attributed the traffic to one phenomenon: cars that drive onto Avenue de la Gare despite not being permitted to. This in turn confuses the bus network and consequently causes tailbacks stretching beyond the train station.

To help resolve the issue, authorities distributed flyers detailing which roads are accessible for cars to motorists on Thursday. The entire chaos comes as motorists adjust to a new phase of the tram construction works, which has seen traffic reorganised in the area as of Monday. The City authorities continue to search for solutions, exploring the possibility of opening new bus stops and adjusting traffic lights in the area. This latter point will allow certain traffic lights to remain green for a longer period and others red for a longer period.
For one thing, authorities have determined the cause of tailbacks on the Rocade de Bonnevoie. This is broadly due to the fact that the traffic lights turn green on the intersection between the Rocade and Boulevard d'Avranches (towards Verlorenkost) at the same time that the boulevard is already filled with cars coming from the Polvermillen area. Consequently, traffic lights need adjusting on this intersection.

The authorities have acknowledge the fact that it will be a difficult year until the tram works are completed, but if every driver in the area contributes to resolving the issue - perhaps by carsharing, Goldschmidt suggested - then the issue could be alleviated.

Goldschmidt refused to entertain the suggestion that the authorities had poorly planned the coordination of the construction sites. He stressed that some construction sites are simply unavoidable, like those required to change underground cables, which must take place periodically. Following on from that, the city must also complete the tram development and the complicated roadworks along the Buchler bridge.

Finally, there are roadworks that occur as a result of individual home renovations or residence constructions. Goldschmidt alluded to the tricky position of the municipal authorities: "We cannot simply tell residents they are not allowed to build for five years, as this brings us back to the issue that we are not building enough homes."

Globally, the councillor believes the coordination is fine, but admitted sometimes those in charge of individual construction sites do not follow municipal authorisations, which then causes traffic as a knock-on effect.