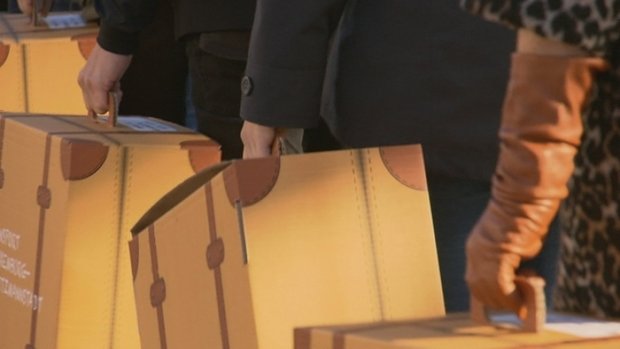 Thursday marks 78 years since 323 Luxembourgers were forced to board a train, not knowing where they were going. As it turns out, the train deported these Luxembourgers to the Łódź or Litzmannstadt ghetto.

The 'Grenzenlos Gedenken' initiative (Commemoration without Borders) invited attendees on Wednesday to Luxembourg City's station to commemorate those forced to be deported 78 years ago.

Jews from other European cities were deported to Łódź-Litzmannstadt, which was the second-largest ghetto in Europe after Warsaw. The Nazis deported Jews from Vienna, Prague, and Luxembourg, among other cities.

At the commemoration, six students read out the names of all those placed in the train that departed Luxembourg City on 17 October 1941. None of those Jewish Luxembourgers or the 189 individuals forced to get on boar the train in Trier knew where they were heading.

The train came to its destination at the Łódź ghetto, referred to as Litzmannstadt by the Nazis. The group that organised the commemoration highlighted that they wanted to ensure those 323 Jews and their fates would not be forgotten amid the 6 million victims of the Nazi regime.

Student Morgane Schank stressed that we cannot forget the past given the horrific events that occurred. Most of those who were deported never returned, Schank added, and we should endeavour to remember their bravery.

Only 15 of those people deported survived both the ghetto and the extermination camp. And this was not the only train towards Poland to leave Luxembourg - a total of seven transported Jews from the Grand Duchy. The students who organised the initiative remained unsure whether humanity has learnt from the past. Nicole Da Silva pointed to current politicians elected, and how some of these politicians in power could cause another tragedy like the Holocaust. She added that we must not forget the events of WWII, as some individuals who should not have been given power were in charge of countries, and 'we must acknowledge that it is our fault, as we gave them that power'.

This marks the first time the initiative organised the commemoration, not only in Luxembourg but also in Germany.