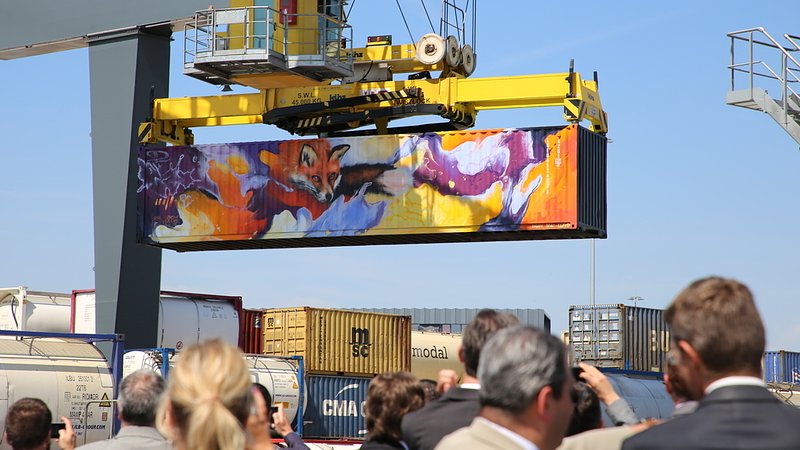 Two containers painted by Luxembourgish artists have joined "Noah's train", the so-called "longest mobile artwork in the world", which passed through the Grand Duchy on Wednesday.

The freight train baptised "Noah's Train" made a stop in Luxembourg on Wednesday 10 July, leaving a little more colourful thanks to Luxembourg artists Daniel Mac Lloyd and Alain Welter, who painted two more shipping containers which were added to the 12 already forming Noah's Train.

WHAT IS NOAH'S TRAIN?

The train was created by assorted European rail companies as part of the association Rail Freight Forward, with the aim of promoting freight transport by rail, which is more environmentally friendly than lorry transport.

Luxembourg's national railway company CFL, is one of the 18 members of the association, whose actions are expected to last until 2030, in order to double the share of rail freight in Europe from 18% to 30%, according to a press release. The rail companies involved are hoping to thus establish a transition towards more eco-friendly freight transport.

Founded after the Katowice COP24 UN climate summit in December 2018, the association maintains that railway companies offer attractive and competitive services, showing infrastructure managers that it is just as easy to traverse Europe by train as it is to cross by lorries and trucks, and highlighting the need for an equal situation between different modes of transport.

The train, which left Poland last December, has thus far stopped in Vienna, Berlin, Paris, Brussels, Rome and Munich before visiting the Grand Duchy. It will continue to travel across Europe until next October, before the shipping containers will rejoin the next COP25 UN climate summit in Chile.