The peaceful "civil disobedience" act was due to begin at 3pm in front of the Ministry of the Environment building on Place de l'Europe, but appeared to be subject to some initial delays. 40 minutes later than initially planned, the protesters set off towards the Red Bridge (Grand Duchess Charlotte bridge).

Initial police estimates claimed the number of protesters was around the 400 mark, but the police since adapted that number to nearer 1,000. This second figure is closer to that given by the organisers, who cited 1,500 participants.

Protesters had a number of chants and slogans throughout the march, including a rather dedicated and creative move of pushing a sofa along the roads with the attached sign: "Politicians, are you comfortable?" 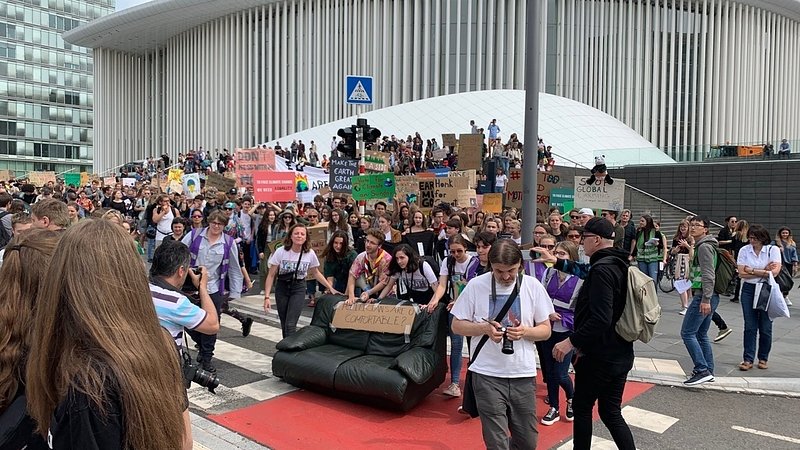 By 4.07pm, the protesters reached the Red Bridge. Buses appear to be passing the blockage comfortably, whilst individual cars are not having as much luck.

According to our RTL 5Minutes colleague, Thomas Thoussaint who was at the scene, only one lane was closed to traffic on the Red Bridge. Whilst the stream of protesters was certainly dense, it seems that motorists were able to use the bridge heading towards Kirchberg.

Police officers at the scene confirmed they had not planned a complete block of the Red Bridge. The police were adamant that a lane would remain open, so the protesters blocked off two lanes towards Luxembourg City.

A Tweet posted by the police showed traffic at a standstill on the Red Bridge. Whilst cars passed by slowly, protesters took to throwing flyers into the open windows of passing vehicles in a bid to spread their message. Students at the protest also maintained that they would organise another large-scale protest during the start of the 2019/2020 academic year.

A student told the RTL 5Minutes journalist at the scene that the movement does not see its protests as its objective, but instead views protests as a means to trigger increasing awareness. Protesters regretted seeing so many motorists alone in their cars, deploring the lack of carpooling in Luxembourg. The police confirmed that for a short while, two lanes towards Luxembourg City were blocked off to guarantee the safety of protesters until officers escorted protesters away from the second lane.

Organisers confirmed that despite the delay, the protest was going as planned. The protest was due to end at 7pm, but ended nearly an hour earlier.

At 6.10pm, the police started moving protesters away from the bridge towards the city centre and the Kinnekswiss, where the march came to its conclusion.

Whilst the organisers requested leave to strike on 15 March, they had not contacted the Ministry of Education on this occasion.

The organisers wrote on Facebook that the European elections are climate elections, but reiterated their non-political stance. After protesting in Kirchberg, the march will move on to block the Red Bridge (Grand Duchess Charlotte Bridge) to traffic and have worked with the police ahead of the event.

A similar protest is taking place in Trier, as the global Youth for Climate movement announced its second global strike. In total, young people in 118 countries are taking part.