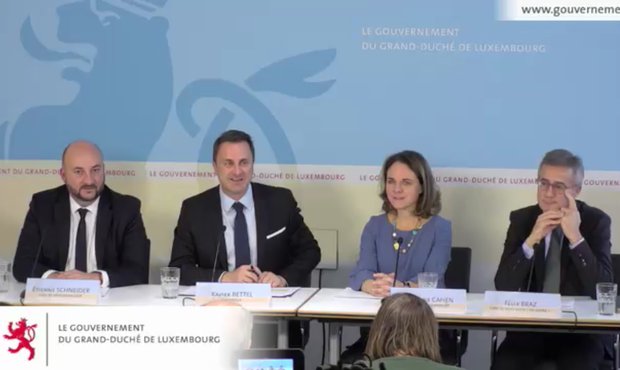 On Thursday at 3pm Xavier Bettel announced the outline of the coalition programme alongside Corinne Cahen (DP), Etienne Schneider (LSAP), and Felix Braz (the Greens), who represent the three parties.

The three parties (Democratic Party, Luxembourg Socialist Workers' Party, and the Greens) have come to an agreement on the coalition text.

Bettel began by highlighting that the text of the agreement still needed to be finalised and approved by the various party leaderships. He stressed that the situation was radically different to the one under which the coalition was formed five years ago.

If all the party leaderships approve of the coalition agreement, then the new government will be inaugurated next Wednesday, 5 December. The first announcement is that the Greens, who performed particularly well in the election, will be in charge of five ministries. The DP and the LSAP will each head six ministries.

The key themes at the conference were continuity, modernity, competition, the environment, and purchasing power.

Corinne Cahen, representing the DP, confirmed that the minimum wage would rise by €100 per month and that all companies would see a tax reduction of 1%, which will be particularly beneficial for small and medium enterprises. Etienne Schneider, speaking after Cahen, reiterated that raising the minimum wage was an especially important point for LSAP.

As for taxes, the representatives confirmed that the Grand Duchy will move to a single tax bracket, albeit one which will be adjusted depending on the number of children in a household.

Schneider announced that there would be a referendum concerning the constitutional reform. The Chamber requires a two thirds majority to vote on constitutional changes, which is why the governmental will work together with the opposition party CSV.

Other announcements include the confirmation of free public transport and the further development of the tram network. Despite confirming that public transport would be made free of charge, nobody at the press conference confirmed that kilometric allowances would be reformed.

"Maison-relais" daycare centres will be free of charge, as will contraception. There will also be two further holiday days: a bank holiday celebrating Europe on 9 May and an extra day of leave.

A member of the press enquired about the news concerning legalising the recreational use of cannabis, as first reported by the radio station 100,7. Bettel confirmed that this too would occur during the coalition's legislature.

Finally, as for health issues, it was confirmed that as of 31 December 2020, Luxembourg will ban the use of the weedkiller glyphosate. As for health insurance and generalising a third-party payment system, Bettel and the representatives of the three parties explained that this will be a slow process. The first phase will be a test one with volunteers.

The agenda over the next week

On Friday 29 November,  specific news concerning which ministries each party will be allocated will be confirmed. On Monday 3 December, the heads of all three parties will meet to finalise the agreement and sign it.

After the agreement has been signed, it will be placed online for the public to view and read.

Finally, on Wednesday 5 December, the new government will officially be sworn in if all the parties agreed on the coalition agreement in its final form on Monday.