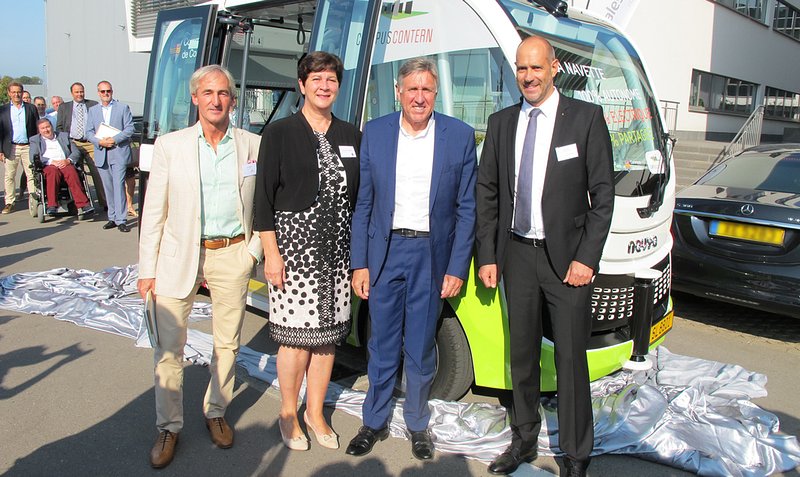 The first driverless minibus was inaugurated in Contern today. The electric bus goes from the station through the industrial zone.

The last few years have seen increased innovation in public transport to make it more appealing for commuters and reduce the number of cars, thus alleviating congestion. The buses have space for up to 14 passengers.

One of the newer innovations is a driverless minibus. Certainly a strange idea here in Luxembourg, but in other countries these types of electric buses are becoming the norm.
The introduction of these electric and self-driving minibuses is part of a European pilot project titled Avenue. The project will last four years.

One of the flaws of public transport is that you rarely end up at your final destination with the bus or train, instead having to walk the last stretch of your journey. Perhaps not a problem in the summer, but it's not the most pleasant experience when it's cold or raining. This is where minibuses come in, as they can stop wherever you need them to and can be in operation 24 hours a day.

These driverless minibuses are currently only operating in a test phase as regulated by the Ministry of Sustainable Development and Infrastructure. As part of the test phase, an operator must be on board for legal reasons. This operator may not have a steering wheel, but they can stop the minibus at any time. The reason for this is that it is still unclear how these driverless minibuses will operate on busy roads. The goal is that these operators will no longer be needed within the next five years. The bus learns the route and has an antenna to establish where it should go via a satellite. The bus' driving is not quite automatic yet. Before the minibus can start driving on a particular route, it has to be programmed so as to follow an exact set of directions.

A second driverless minibus will be inaugurated on Thursday and will serve those needing to get through Pfaffenthal. It will run between Pfaffenthal lift, the funicular, and the Val des Bons Malades cemetery.