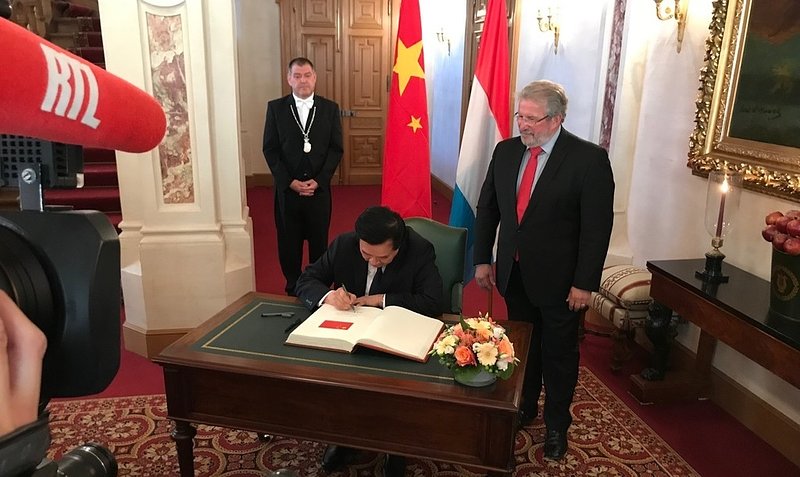 During the visit of the new secretary general of the Henan province, the minister for infrastructure François Bausch announced a test-run between Bettembourg and Zhengzhou.

Cooperation projects between Luxembourg and the Chinese province of Henan are entering a new phase. An air link has been in place for almost five years now. Passenger flights and a direct railway line between Bettembourg and Zhengzhou, capital of east-central China's Henan province, are set to follow.

Bausch, head of the Ministry of Sustainable development and Infrastructure, said that it is hard to foresee how the world economy will evolve over the next couple of decades. The Luxembourg government had not agreed to anything economically risky, Bausch stated; but he added that it is important to try and get a seat at the table nonetheless. The minister praised the good working relationship between Luxembourg and Zhengzhou.

What comes to mind when thinking of Henan province are 100,000 iPhones, but also Cargolux airlines, one of the major freight operators on Zhengzhou airport. Over the next couple of years, Henan is supposed to become one of the biggest trade hubs in China, with the help of the central government. While the air link Luxembourg - Zhengzhou has been operating for almost five years, the Luxembourg government has now proposed a CFL multimodal transportation system. A test run will use existing train tracks south of Moscow.

Bausch explained that there would have been little use for the train connection to Henan just a while ago. However, two big companies are currently "on the hook" according to Bausch, which is why he hopes that the test phase can begin sooner rather than later.

The province of Henan also boasts 100 million inhabitants and a growing middle class. This is why the Chinese side would love to see passenger flights going to Luxembourg, preferably using a direct connection. The Luxembourg side is slightly less keen on this idea, since the Chinese tourists would probably not stay in Luxembourg for long.

Bausch said that they would need to organise the passenger line themselves, but that Luxembourg would of course make sure that the logistics add up. A „Memorandum of Understanding“ was signed during the visit, expressing both sides' goodwill.