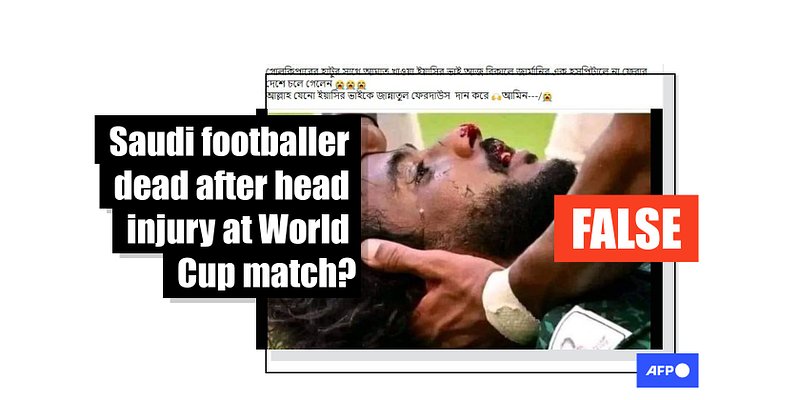 Facebook users in Bangladesh have repeatedly shared posts that falsely claim a Saudi Arabian football player died in hospital after a severe head injury sustained during a match against Argentina at the 2022 World Cup in Qatar. While the player, Yasser Al-Shahrani, had to undergo surgery after the match, the operations were successful and he was discharged from hospital.

"Brother Yasser, who was injured after colliding with the knee of the Saudi goalkeeper during the match between Saudi Arabia and Argentina, has breathed his last in a hospital in Germany”, reads the Bengali-language caption.

The post includes an AFP photo of Al-Shahrani after he was injured, Getty Images and Reuters photos of the moment he collided with the Saudi goalkeeper and an X-ray image of a crushed skull. 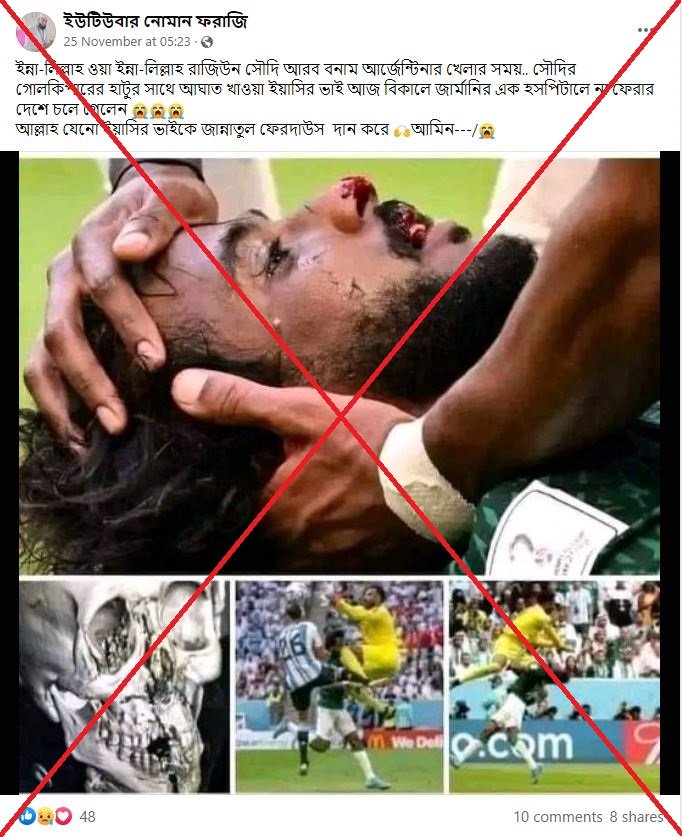 The post circulated after Saudi Arabia stunned Lionel Messi's Argentina at the 2022 World Cup in Qatar, beating the two-time champions 2-1 in one of the biggest upsets in the tournament's history.

Al-Shahrani suffered a late injury in the match after colliding with goalkeeper Mohammed Al-Owais, whose knee connected squarely with Al-Shahrani's face.

The claim, however, is false -- tweets from the Saudi national football team say Al-Shahrani underwent two successful surgeries in the Saudi capital Riyadh and has since been discharged from hospital.

The Saudi team posted a video message from Al-Shahrani following the match with Argentina on the team's official Twitter account.

"I would like to assure you that I am OK, pray for me and congratulations on winning," Al-Shahrani said from his hospital bed in Qatar's capital Doha on November 23.

A statement posted on the team’s Twitter account on November 23 said that medical examinations revealed Al-Shahrani to be in a "stable condition" after "suffering a strong clash in the head, chest and abdomen".

He was then "transferred by medical evacuation to the National Guard Hospital in Riyadh".

An update posted on the evening of November 23 said an operation on his pancreas had been completed "with success." Al-Shahrani's successful surgery was reported by AFP here.

Another statement was posted on November 27 that Al-Shahrani had undergone a second surgery -- this time for facial injuries -- and the operation was successful. The news was also reported by the Saudi Arabia-based Arab News newspaper.

Al-Shahrani was discharged from hospital on November 30, according to a tweet from the national team, after he was deemed to be in a stable condition.

AFP has debunked other false and misleading claims about the 2022 World Cup here.