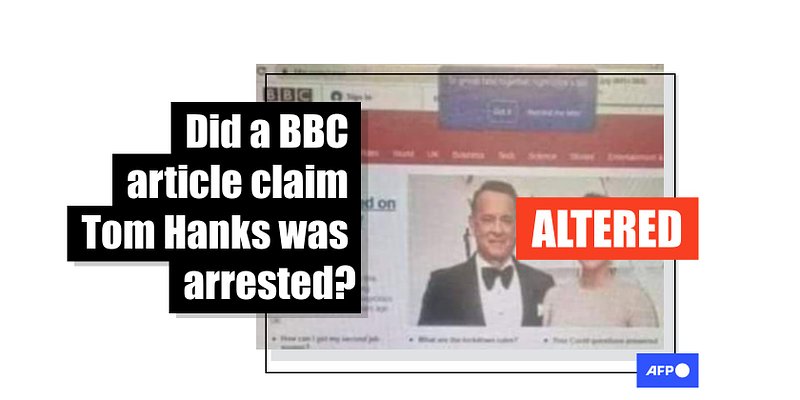 Twitter users are sharing a purported screenshot of an article from the British Broadcasting Corporation (BBC) reporting the arrest of Tom Hanks. But the image has been digitally manipulated; the story did not appear on the website of the news agency. 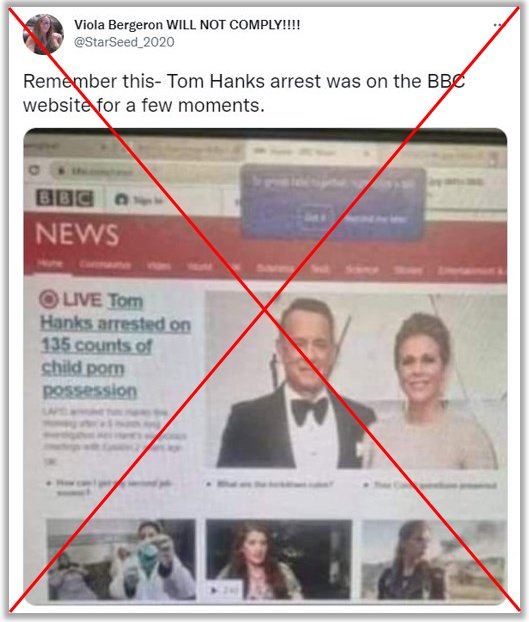 However, the headline, which first spread in 2021, is fabricated and the image of the BBC website has been digitally altered.

"I can confirm this is fake and was not posted by BBC News," a spokesperson for the British broadcaster told AFP.

Searching for the headline on the BBC News website does not find the story.

A keyword search in Google reveals a blog article published on June 20, 2021 that includes a less blurry version of the altered image. In it, one of the bullet points under the top story says: "How can I get my second jab sooner?" which does not relate to the headline about Hanks.

Working backward through online archives of the BBC News website dated before the blog post was uploaded, AFP found a June 18, 2021 version of the homepage with the same bullet point beneath an article about Covid-19 vaccines.

AFP found no reports of Hank's arrest from a reputable source.

QAnon conspiracy theories accusing celebrities of exploiting minors have spread online for years and were amplified after the death of Jeffery Epstein, a convicted sex offender whose death in prison was ruled a suicide in 2019. Hanks has frequently been targeted by QAnon followers but claims his name appeared on flight logs to the disgraced financier's island have been debunked by multiple fact-checking organizations.