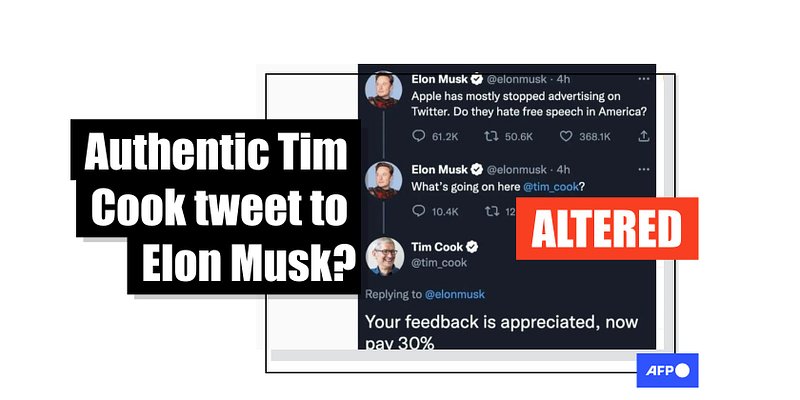 A photo circulating on social media purports to show a screenshot of a tweet from Apple CEO Tim Cook telling Elon Musk to "pay 30%" after the Twitter owner complained about Apple's business practices. But the image is altered; live and archived versions of Cook's page show he published no such post, and the user who created the picture told AFP it was meant as a joke.

"Your feedback is appreciated, now pay 30%," says the supposed tweet from Cook to Musk, who claimed in a series of November 28, 2022 posts that Apple was scaling back advertising on Twitter, suppressing free speech and ripping off developers who put applications on the App Store.

The image ricocheted across Twitter and other platforms, such as Facebook and Instagram. Forbes, an American business news outlet, published the picture in a November 29 article.

While some social media users posted the photo in jest, others appeared to believe it shows an authentic tweet from Cook.

"I cannot believe Tim Cook just landed the haymaker of the year but facts are facts," says a popular November 28 tweet.

"Alright, you gotta admit @tim_cook got him good there," says another. 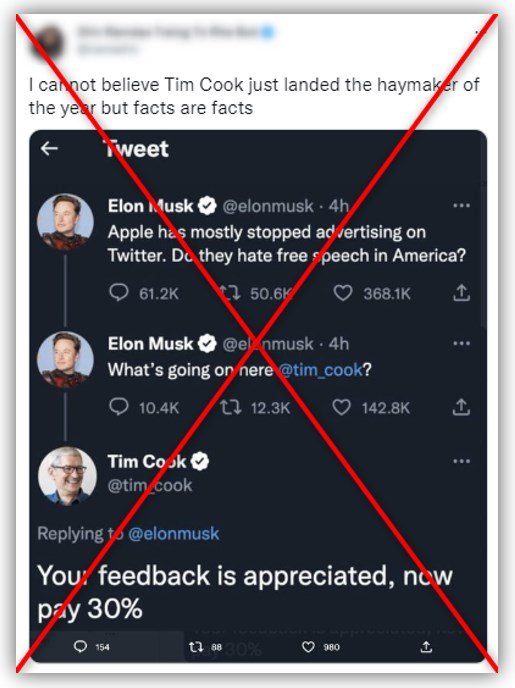 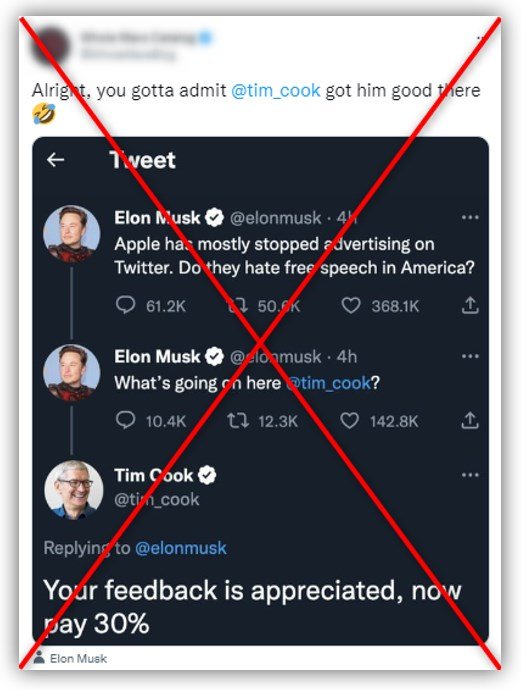 The supposed clapback is a play on Musk's November 2 tweet responding to US Congresswoman Alexandria Ocasio-Cortez, who criticized the Tesla and SpaceX founder for launching an $8 monthly Twitter subscription -- despite his billionaire status and stated support for uninhibited free speech on the platform.

"Your feedback is appreciated, now pay $8," Musk said in reply to the Democratic lawmaker. Days later, he posted a mock-up for a T-shirt sporting the same sentence.

Apple has been open about the commission it receives from purchases in the App Store, contrary to Musk's claim that the company levies a "secret 30% tax on everything you buy." The fee has also been the subject of disputes and legal challenges.

Live and archived versions of the Apple CEO's Twitter page show that, as of 1000 GMT on December 1, he had not posted since November 24 -- four days before Musk's tweeting spree about the company.

The earliest post that AFP found sharing the supposed screenshot came from a Twitter user Chris Bakke, founder of the job-matching platform Laskie. He said in a follow-up tweet published November 28: "Follow me for more directionally correct misinformation."

Bakke confirmed to AFP that he fabricated the Cook post in jest.

"I did create that image, and it is a joke, based around Elon's previous responses to major Twitter users of, 'Thanks for the feedback, now pay $8,'" he said in a Twitter direct message.

Other users did respond to Musk with the statement shared online, including a YouTube creator whose post earned more than 12,000 likes.

Thank you for your feedback. Now pay 30%.

AFP reached out to Apple, but the company did not offer a comment.