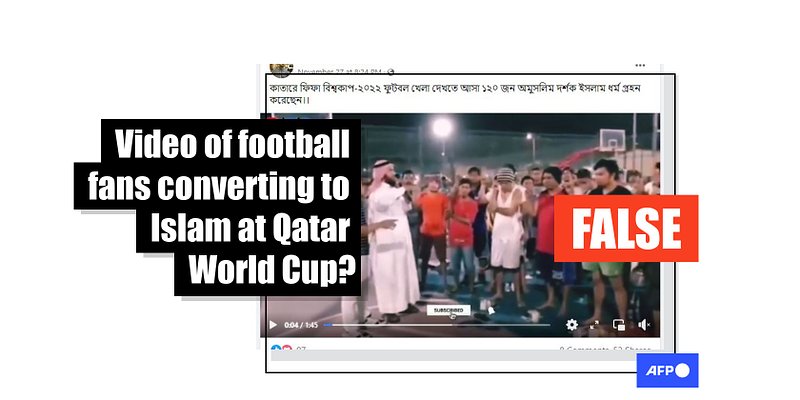 It shows a group of people gathered on a basketball court listening to a man wearing a white robe and then repeating the Arabic words of the Shahada, the Islamic declaration of faith. The group then repeats the profession of faith in Tagalog. 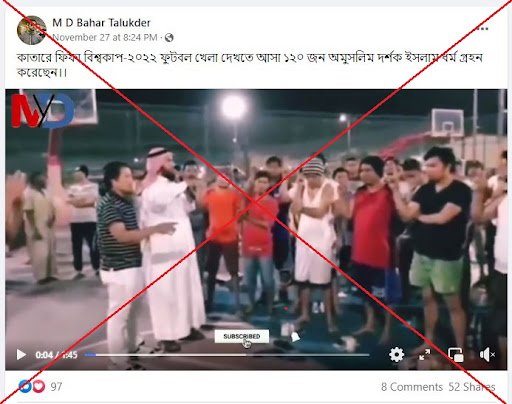 The same video also appeared elsewhere on Facebook alongside a similar claim here and here, where it racked up more than 1.2 million views.

The footage was also shared with similar claims in English, Arabic and Urdu posts, which purport it shows more than 500 people converting to Islam during the World Cup in Qatar.

The posts circulated as the World Cup kicked off in Qatar on November 20, 2022, after a tortuous 12-year build-up dogged by off-field controversies.

The claim that the video shows football fans converting to Islam during the World Cup in Qatar, however, is false.

A combination of keyword and reverse image searches on Google found the video had been circulating online years before the 2022 World Cup in Qatar.

The video's Arabic title reads, "60 Filipinos converting to Islam now at Challenger Company in Al-Shahaniya in Doha... Qatar… Praise be to God, the Lord of the Worlds."

Below is a screenshot comparison of the video in the misleading Facebook post (left) and the genuine video from 2018 (right):

Keyword searches on Google led to a YouTube channel called "Challenger T&C Qatar", which has a video from October 2019 that appears to show a facility for migrant workers in Qatar.

An analysis of the video shows buildings and a basketball court that correspond with those visible in the video shared in the misleading posts.

Below is a screenshot comparison of the video in the misleading post (left) and the footage from Challenger T&C Qatar (right), with corresponding features highlighted by AFP:

AFP has previously debunked another false claim about people converting to Islam at the Qatar World Cup here.