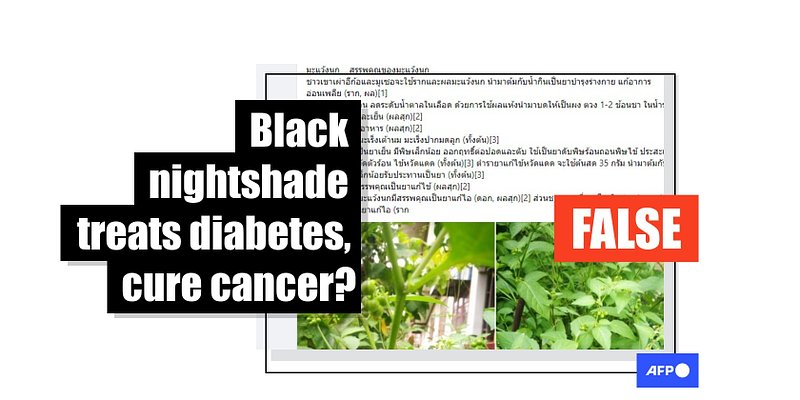 A berry-bearing plant called black nightshade is poisonous and should not be consumed as a herbal remedy for cancer, diabetes and other illnesses, experts say. The plant has not been approved for use as traditional medicine in Thailand, experts told AFP, refuting false Thai-language posts touting black nightshade that have been circulating online for years.

False claims about black nightshade were shared on Facebook here on March 8, 2022.

"It can be used as medicine to cure breast and cervical cancer (whole plant)," reads part of the Thai-language post.

"Akha and Lahu ethnics will use its roots and fruit to boil with water as body nourishments. It can alleviate fatigue (roots, fruit) and the dried fruit grinds can be used to treat diabetes and reduce sugar levels in the blood," it goes on to say.

"The fresh fruit and its flowers have the properties of a cough medicine, while Karen communities in Chiang Mai will boil its roots and drink it as medicine."

Accompanying the claims are 11 photos of what appear to be a black nightshade plant. 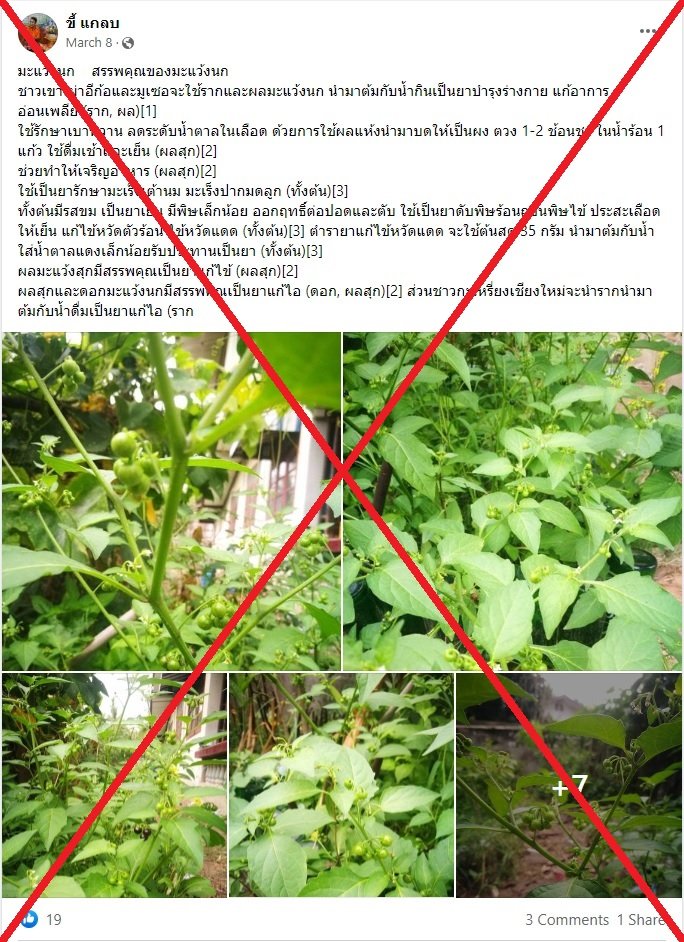 But experts told AFP that consuming black nightshade could be harmful, and the plant has not been found to treat the diseases mentioned in the posts.

Busaraporn Thonsrirungkun from the Department of Thai Traditional and Alternative Medicine told AFP on November 28: "This plant is known to be poisonous in all of its parts so I cannot recommend people turn to it as a herbal remedy."

She said parts of the plant contain a substance called solanine that can induce nausea and raise the body's temperature.

"In severe cases, such as an allergic reaction, the chemical can become life-threatening," Busaraporn said.

The green fruit of black nightshade contains the highest amounts of solanine and is the most toxic part of the plant, according to US-based health information website WebMD.

Not a herbal medicine

Black nightshade has also not been approved for use as a traditional medicine in Thailand, Busaraporn said.

"Despite being mentioned in old scriptures that it can be used to eliminate tumours or even cure diabetes, the plant has never been approved as a registered traditional medicine because it lacks the detail and research required for medicine."

Thailand's national list of essential medicines as of November 25 -- published here by the kingdom's health ministry -- does not include black nightshade.

Dr Supakorn Pitakkarnkul, head of the Gynecological Cancer Group at Thailand's National Cancer Institute, told AFP on November 30: "Although the plant's extracts have been recorded to be able to kill cancer cells, these are results from laboratory tests.

"The method has not been tested in terms of safety and effectiveness for cancer treatment in a real-world case."

The National Cancer Institute separately issued this report in March 2021, saying claims that black nightshade can cure cancer are false.