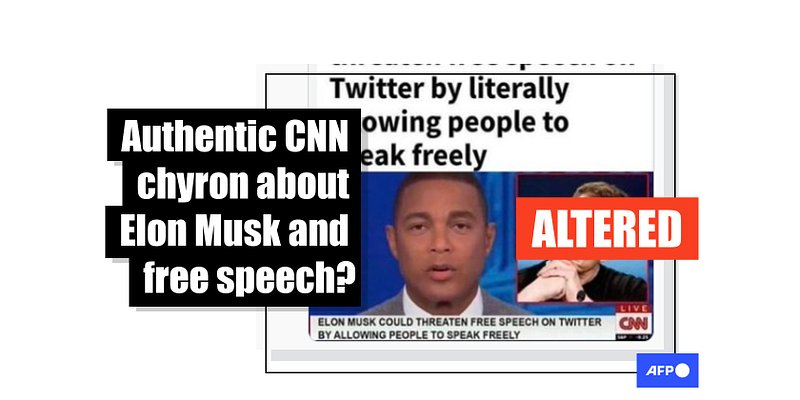 Twitter owner Elon Musk claims CNN ran a segment saying Musk could jeopardize free speech on the platform "by allowing people to speak freely." This is false; the chyron -- which AFP first debunked when it circulated months ago -- is fabricated and never appeared in a CNN broadcast, the US cable news network said.

"ELON MUSK COULD THREATEN FREE SPEECH ON TWITTER BY ALLOWING PEOPLE TO SPEAK FREELY," says the text in the lower third of what appears to be a CNN segment featuring host Don Lemon discussing Musk, who finalized his purchase of Twitter in October.

Musk, a self-proclaimed free speech absolutist who has shared misinformation before, tweeted the image and pinned it to the top of his page on November 28, 2022.

Musk later un-pinned the tweet from his profile after a note attached to it under Twitter's crowdsourced fact-checking project Community Notes said: "The screencap in this image is not real." The billionaire entrepreneur wrote in a follow-up post, "@CommunityNotes FTW!" 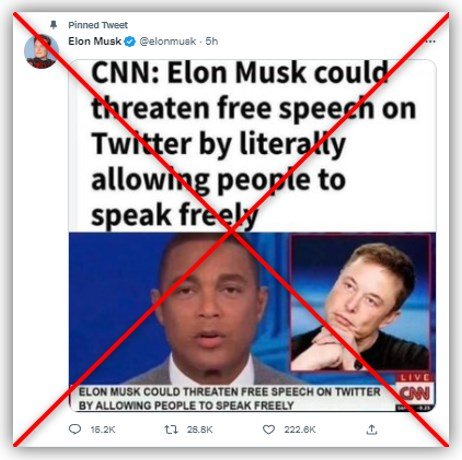 But Musk's original tweet -- blasted out to his 119.3 million followers -- had already racked up hundreds of thousands of interactions on the platform and inspired similar posts on Facebook and Instagram.

"Don Lemon" trended on Twitter as users of the platform criticized the longtime CNN anchor over the fake chyron.

"Yes Don Lemon IS this stupid," said another.

The image Musk shared does not show an authentic CNN chyron, however; it has been digitally manipulated and originated with the Genesius Times, a satirical website that bills itself as "the most reliable source of fake news on the planet," in April 2022.

AFP debunked social media posts sharing the same image at the time, noting that the font and format of the fake chyron do not match the layout of CNN's broadcasts.

In a tweet replying to Musk, CNN Communications added: "This headline never appeared on CNN. Be better."

The digitally altered image added the fake banner text and a stock photo of Musk to a screenshot of Lemon from what appears to be the January 28, 2020 episode of "CNN Tonight with Don Lemon" -- a show that stopped running in October as Lemon moved to a morning slot.

In the original broadcast, which AFP found using reverse image searches and the Internet Archive, Lemon can be seen wearing the same white shirt, dark tie and gray jacket.

The 2020 segment never mentioned Musk, who made his bid to buy Twitter in April 2022. Instead, the chyrons under Lemon focused on former US president Donald Trump's first impeachment and tributes honoring the death of professional basketball player Kobe Bryant.

Musk's amplification of a fake chyron comes despite his own criticism of parody content that is not clearly labeled. After changes he ushered in led to imposter accounts impersonating public figures, Musk tweeted that "tricking people is not ok."

"Going forward, accounts engaged in parody must include 'parody' in their name, not just in bio," he wrote on November 10.

AFP attempted to contact Musk through press contacts for Twitter and his companies Tesla and SpaceX, but no response was forthcoming.