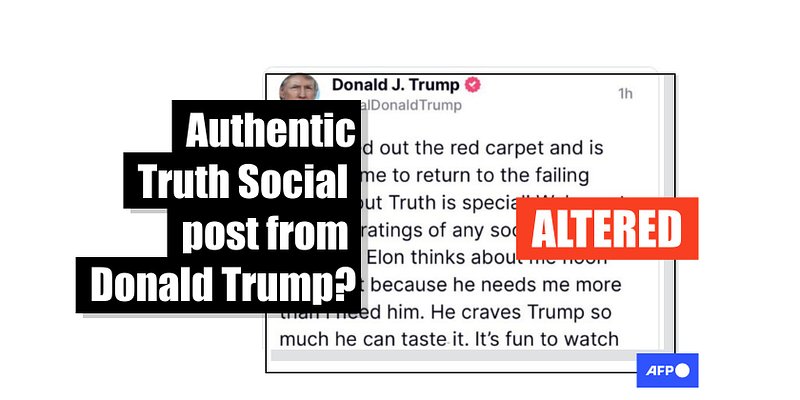 Social media users are claiming former US president Donald Trump mocked Elon Musk in a post on Truth Social, telling the Twitter owner he will not return to the platform until "you call me daddy." This is false; a review of the live and archived versions of Trump's Truth Social account shows no such post being made.

"Elon rolled out the red carpet and is begging me to return to the failing Twitter, but Truth is special!" says the text in what appears to be a screenshot of a Trump post on Truth Social, the platform he launched in February 2022 and has used since April.

"We've got the best ratings of any social media platform! Elon thinks about me noon and night because he needs me more than I need him. He craves Trump so much he can taste it. It's fun to watch him grovel at my feet! Hey Elon, I'll come back when you call me daddy!!" 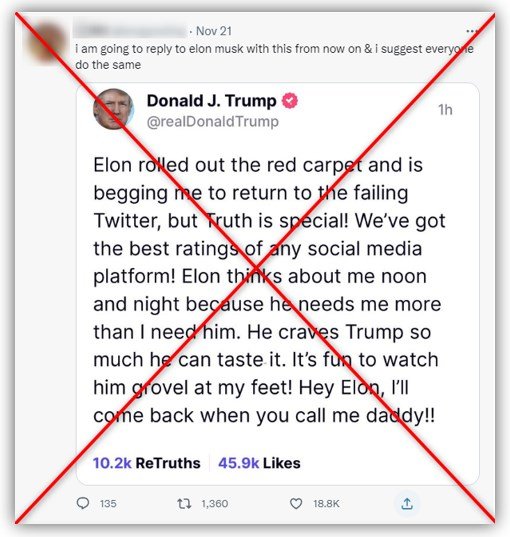 The image circulated widely on Twitter, Facebook, Instagram and other platforms on November 21 after Musk, the billionaire entrepreneur who took over Twitter in October, posted on November 19: "The people have spoken. Trump will be reinstated."

Musk held a Twitter poll the previous day asking if Trump should be reinstated to the platform, from which he was banned in January 2021 after the attack on the US Capitol by his supporters, a violent effort to overturn Trump's 2020 election loss to Joe Biden.

Trump, who recently declared he will be running for president again in 2024, cheered Musk's Twitter poll on Truth Social as it happened, but added: "Don't worry, we aren't going anywhere. Truth Social is special!"

His Truth Social page -- and archived captures of it -- show he has not posted about Musk or Twitter since, contrary to the claims made online. The purported "call me daddy" post attacking Musk appears to be fabricated.

On November 21 -- the day images of the purported post about Musk emerged online with a timestamp of "1h," according to CrowdTangle, a social media insights tool -- Trump posted only four times in total.

In one such post, Trump shared a pro-Trump hype video. In another, he criticized Republican candidates in Colorado and New Hampshire who were defeated in the midterms. He also re-posted two previous posts in which he had shared links to articles about US cable news rankings and the viewership for his speech announcing his campaign for 2024.

AFP reached out to Trump's office and Save America PAC about the supposed Musk post, but no responses were forthcoming.

Keyword searches on Truth Social for phrases such as "Elon rolled out the red carpet," "Elon thinks about me noon and night," "grovel at my feet" and "call me daddy" generated no relevant results from the former president.

Online searches also revealed no credible news reports about any such post by Trump. One article from Occupy Democrats, a liberal advocacy group, has since been deleted; the headline is now listed on its website as "retracted."

Trump did post on Truth Social about Musk in July, writing: "When Elon Musk came to the White House asking me for help on all of his many subsidized projects ... I could have said, 'drop to your knees and beg,' and he would have done it."

But speaking November 19 via video at a gathering of the Republican Jewish Coalition in Las Vegas, Trump said he supported Musk's purchase of Twitter and said: "I do like him. He's a character, and I tend to like characters, but he's smart."

Of a possible return to Twitter, Trump was dismissive, touting the strength of his platform before saying: "I don't see it, because I don't see any reason for it."

A May filing with the US Securities and Exchange Commission says, "President Trump is generally obligated to make any social media post on TruthSocial and may not make the same post on another social media site for 6 hours," although it adds that "he may make a post from a personal account related to political messaging, political fundraising or get-out-the-vote efforts on any social media site at any time."