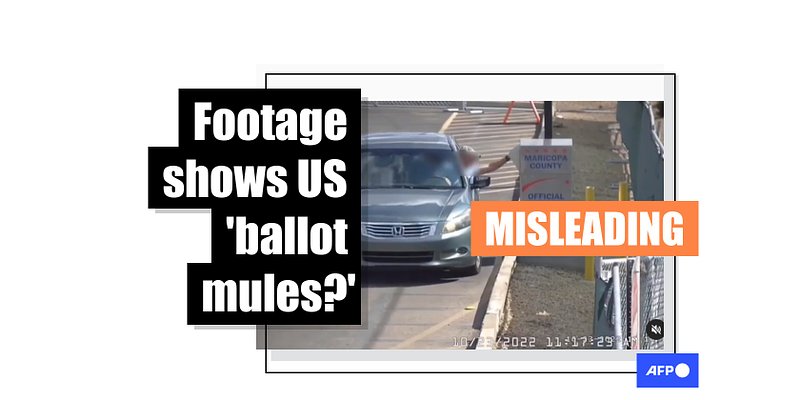 Footage of supposed "mules" stuffing ballots into drop boxes in Maricopa County, Arizona has circulated online alongside allegations of wrongdoing in the 2022 US midterm elections. This is misleading; there is no evidence of widespread fraud in the state, where residents are legally allowed to return several votes at once.

"Video of Ballot Harvesting in AZ. We all know what happened in Arizona," says a November 17, 2022 Instagram post sharing surveillance videos of a Maricopa County drop box.

The footage was taken before, during and after the November 8 midterm elections, according to timestamps on the clips.

Democrats narrowly won the hard-fought US Senate and governor's races in Arizona, but technical difficulties reported in Maricopa County on Election Day pushed the state to the center of false fraud claims -- many of which echoed baseless conspiracy theories from the 2020 presidential contest. One widespread narrative about "ballot mules," people who supposedly return multiple illegal absentee votes at a time, was popularized by a debunked film from conservative commentator Dinesh D’Souza.

But Maricopa County has refuted allegations of such activity affecting the outcome of the midterm elections.

Dropping off multiple ballots at once -- pejoratively referred to as "ballot harvesting" -- is not illegal in Maricopa County, home of Phoenix. Voters can return ballots for family members, people they live with or as someone's caregiver, according to the Arizona legislature.

"There is not a statutory provision that limits the number of ballots someone can return if they meet the criteria defined by law," said Megan Gilbertson, a Maricopa County Elections Department spokeswoman.

Two ballot couriers of different political parties are required to pick up signed and sealed early ballots every day at drop box locations, according to the county. The votes are then securely transported to the Elections Department.

"To ensure that only eligible ballots are processed, each early ballot is signature verified by trained elections staff before it can be counted," Gilbertson said.

Those who illegally collect and return ballots face felony charges that can result in prison, per Arizona law.

Pam Smith, president of Verified Voting, a non-partisan group that promotes the responsible use of technology in elections, also said the claims circulating online are unfounded.

"Even if there were large numbers of ballots being dropped at drop boxes -- beyond the cited rules -- there are safeguards in place to prevent fraud," she said.

"The video does not represent fraud," Smith said. "Claims of fraud -- if any -- must be investigated. And that can take time, but it should be noted that the number of cases of fraud are vanishingly small across the entire country."

The federal Cybersecurity and Infrastructure Security Agency said there are no verified reports of widespread malfeasance affecting the 2022 midterms.

"We have seen no evidence that any voting system deleted or lost votes, changed votes, or was any way compromised in any race in the country," the agency said in a November 9 statement.

AFP has fact-checked other false and misleading claims about Maricopa County's midterm elections here and here.