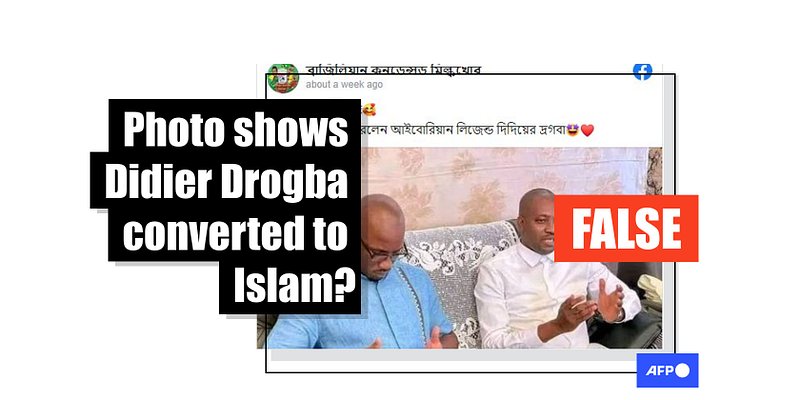 Facebook posts shared hundreds of times in various languages in early November have falsely claimed that the former Ivory Coast and Chelsea footballer Didier Drogba converted to Islam. The claim circulated in some Muslim-majority countries, including Bangladesh, after a photo of Drogba appearing to pray was shared online. Drogba took to Twitter on November 7 to dismiss the claim that he had converted to Islam, saying "I haven't changed religion".

"Praise be to God. Ivorian legend Didier Drogba accepted Islam as his religion", reads the caption of a Bengali-language Facebook post published on November 8, 2022.

It was shared alongside two photos of the former striker. The top image shows Drogba sitting on a sofa next to another man while bowing his head towards his hands, similar to a gesture in Islamic prayer.

The bottom photo shows him celebrating with his Chelsea teammates after they won the English Premier League title in 2015. 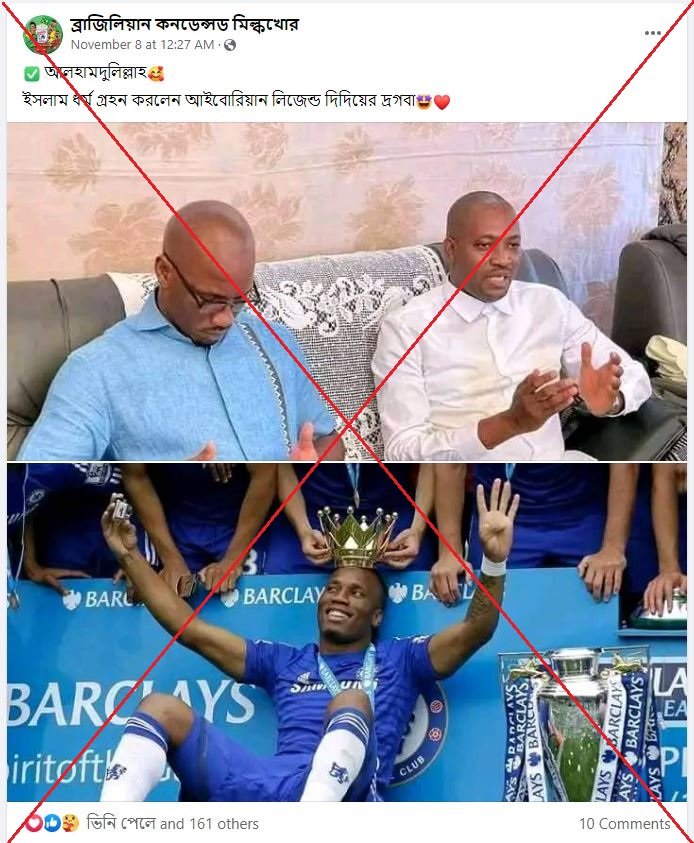 This tweet with a similar claim has been retweeted more than 3,300 times and liked more than 38,000 times since November 8.

But Drogba has denied the claim circulating online and said he did not change his religion.

Responding to the social media posts, Drogba on November 7 tweeted: "This story is going viral but I haven't changed religion."

"This was just me paying respect to my Muslim brothers I was visiting in my village. A moment of togetherness. Much love and blessings to all", he wrote in reference to the photo in which he appears to be praying.

This story is going viral but I haven’t changed religion.
This was just me paying respect to my Muslim brothers i was visiting in my village. A moment of togetherness.
Much love and blessings to all

Drogba was described as a "Catholic soccer star" in a May 2022 report by the Catholic News Agency.

According to 2014 census data, 33.9 percent of Ivory Coast's population is Christian while 42.9 percent is Muslim.

A combination of a keyword and reverse image search found the photo here, alongside some others, in a November 5 Facebook post published by Meite Aboulaye, a deputy to the National Assembly of Ivory Coast.

He appears in the image beside Drogba.

Below is a screenshot comparison of the photo shared in the false posts (left) and the photo posted by Meite Aboulaye on November 5, 2022:

Screenshot comparison of the photo shared in the false posts (left) and the photo posted by Meite Aboulaye on November 5, 2022

Contacted by AFP on November 15, Meite Aboulaye clarified that the photo has been misrepresented in social media posts.

"He (Didier Drogba) was with me with the family. The parents expressed blessings and, out of humility, he had to raise his hands like the other Muslims," he said.

"I shared the photos without ulterior motives, but unknown persons interpreted them differently."

Drogba visited his village on November 4, 2022 along with Meite Aboulaye and others, according to local media reports published on November 5.

On November 7, Drogba also posted photos of the visit on his Facebook page.