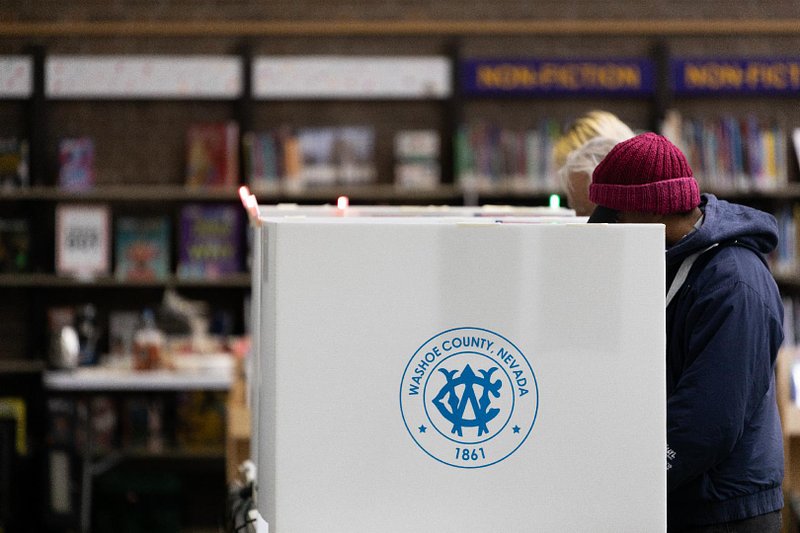 Live footage of ballot counting in Nevada's second most-populous county cut out the night of November 9, 2022, prompting a wave of claims on social media that the incident was a cover-up for fraud in the US midterm elections. These allegations are unproven; Washoe County said it did not tally or report any votes while the livestream was down, and that it confirmed no one entered the ballot room or registrar's office during that time.

The headline mirrors claims across social media, where a November 10 tweet from Washoe County acknowledging its livestream "went dark" prompted an explosion of posts casting suspicion over what happened. Some shared conspiracy theories about a supposed ploy to rig the results, according to the Election Integrity Partnership (EIP), a research coalition focused on misinformation around elections.

"Something always happens when the cameras mysteriously go down. In a crucial swing state, after the election, and Democrats somehow gain votes," says one of the first tweets spotted by researchers. 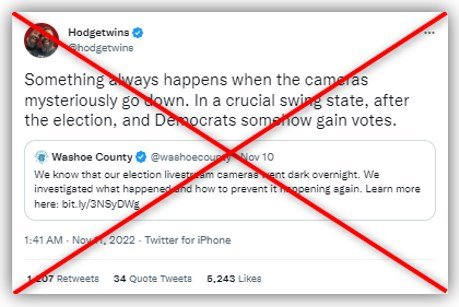 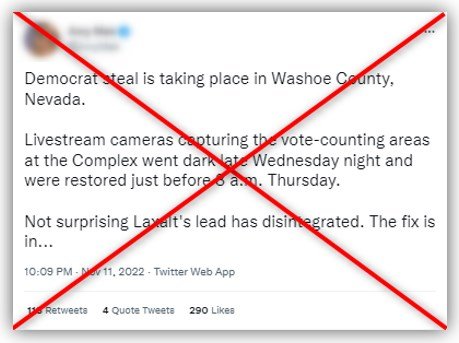 On November 11, the "nine minutes" claim made its way to a podcast hosted by Steve Bannon, the White House chief strategist under former US president Donald Trump. That same day, the incident in Washoe County, where Reno is located, also earned a segment on Fox News host Tucker Carlson's primetime talk show -- one of the most-watched cable news programs in the US.

American media have projected that incumbent US Senator Catherine Cortez Masto has defeated Republican challenger Adam Laxalt, who conceded the race, solidifying the Democratic Party's control of the chamber. Democrats are also the projected winners in several down-ballot contests, although the swing state is slated to elect Republican Joe Lombardo to the governor's mansion.

There is no evidence Washoe County's livestream malfunction was connected to fraud or other vote-counting malfeasance in the state's midterm elections, as the posts claim.

In a press release accompanying its November 10 tweet, Washoe County said its webcams -- which caught the ballot-counting process from four angles -- lost connection with the livestream computer application powering them at 11:24 pm on November 9.

The county had already finished counting votes for the night; all staff left the office an hour before the disruption. They returned at 7 am the following day, according to the press release. 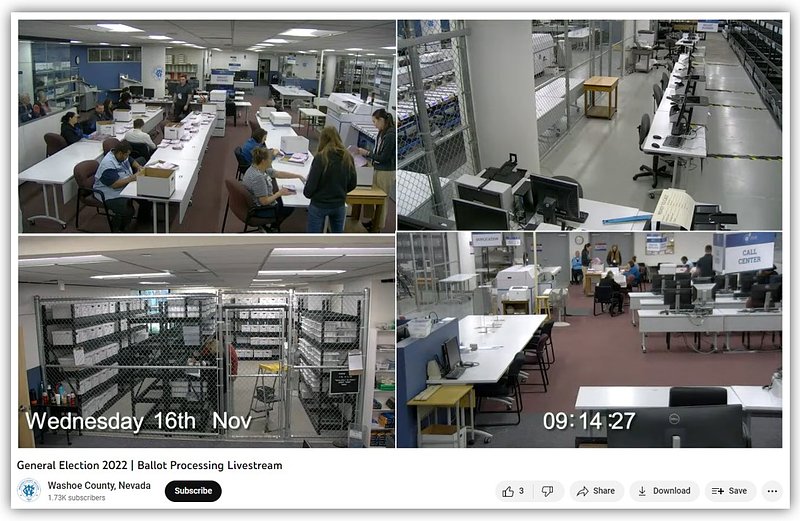 Washoe County, the second most populous in Nevada, said it pulled staff badge reports to ensure no one had entered the ballot-counting room or the registrar's office while the livestream was offline -- and that its security administrator confirmed that by reviewing the building's security cameras. The county published this surveillance online in files showing seven different camera angles, each of which AFP reviewed.

Drysdale confirmed there were no votes reported nine minutes after the livestream went down -- or at any point while the cameras were out, as the Gateway Pundit alleged.

"I don't know who made that up, but that's simply not true," Drysdale said. "Results were recorded around 9:30, and the cameras went down at 11:30, so a full two hours beforehand. The office was completely empty, and in the livestream you can see everybody leaving and going home for the night. There was nobody in there."

There were no votes counted at that time. It happened overnight when the office was empty and results had already been posted for the night.

The next time the county reported results was around 8 pm on November 10, she said. It has provided updates at the end of each day.

The livestream is not required by law, but Washoe County set it up in 2018 for people who wanted to watch the ballot-counting process, Drysdale said. The webcams stream to YouTube through a computer app.

Connectivity issues have occurred before, but always during the day when they could be immediately remedied, Drysdale said.

"This was the first election that we tried to have them going 24/7, and clearly they're just not up to handling that kind of ongoing streaming," she said.

No evidence of fraud

In Nevada, ballots that arrive up to four days after the election are eligible for counting, so long as they are postmarked before Election Day, according to the National Conference of State Legislatures. The state also allows six working days for poll workers to determine whether votes cast with provisional ballots should be tallied.

These policies slowed the preliminary reporting of results after November 8 -- but experts have said for years that they are not a sign of wrongdoing.

"Ballots are supposed to continue to come in, and we are supposed to keep counting them," Drysdale said. "So to claim that ballots were just 'found' is just simply not true."

Manoj Mate, an associate professor of law at DePaul University who researches election law and voting rights, said the claims circulating online seem to be nothing more than "full-fledged speculation that there may be wrongdoing."

“I don't have concerns about this issue, especially since you have the external security cameras, footage of which has been released and the security badge verification," Mate said. "A lot of this speculation is by people who aren’t familiar with election administration or county processes in Nevada or people who don’t have knowledge or subject matter expertise."

Jennifer Russell, public information officer for Nevada Secretary of State Barbara Cegavske, told AFP: "We have not seen evidence of widespread fraud in Washoe or any other county in Nevada."

The US Cybersecurity and Infrastructure Security Agency said in a November 9 statement that it has seen "no evidence that any voting system deleted or lost votes, changed votes, or was any way compromised in any race in the country."

AFP has debunked other misinformation about the midterms here.