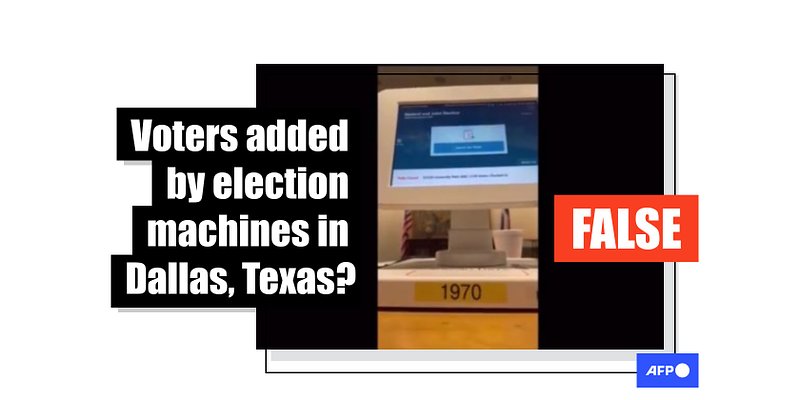 Social media posts claim a video shows hundreds of voters being fraudulently added after polls closed in Dallas County, Texas during the 2022 US midterm elections. This is false; the clip depicts the normal updating of an electronic poll book, not a voting machine, county officials and the election technology company say.

"TEXAS. Footage reveals that poll pads in Dallas were caught adding hundreds of voters in real time as the poll was being closed," an Instagram post sharing a video from a precinct says on November 13, 2022.

"It happened in every state, in every county," the post adds.

The same video gained traction on Instagram -- here and here -- Facebook and Rumble, a video platform popular with conservatives.

Texas was among the US states that chose a governor in the November 8 elections.

Republican Greg Abbott, the incumbent, beat challenger Beto O'Rourke, but Dallas County favored the Democrat who gathered 63 percent of votes there -- according to preliminary results as of November 18. This is in line with past elections, including in 2018 when 66 percent of voters favored O'Rourke in his failed bid for the US Senate against Republican Ted Cruz.

The use of electronic poll book technology is becoming increasingly prevalent in US states. Traditionally, voting administrators have had paper poll books that contain a list of eligible voters in a district or precinct. E-poll books, typically in the form of a laptop or tablet, have greater functionality and allow real time updates of voter history, including if someone has already voted in an election, and other useful checks.

In Texas, the poll books are connected to the internet, but they are never connected to any device that casts or tabulates votes.

The county addressed the claim on its website, saying: "Dallas County's ExpressPoll electronic poll books functioned accurately, but slowly, and correctly recorded the number of voters who were checked in and issued ballots on Election Day."

The statement said more than 200,000 voters were processed on the e-poll books, with the transactions sent to a central server. "Dallas County noticed that there appeared to be some delay in the downloading of those transactions to the other e-poll books."

The video was taken as polls closed on November 8. "Poll workers at many locations noticed the increased speed and continued downloads on their e-poll books after the close of the polls and reported those transactions to Dallas County and other entities," the county said.

Sam Taylor, assistant secretary of state for communications at the Office of the Texas Secretary of State, described the fluctuations in voter counts as "a normal part of the process."

He told AFP that electronic poll books "are required to communicate with each other and update in real time throughout the county."

Election Systems and Software (EE&S), the company behind the poll books, confirmed the video showed their machines and said that the claims of fraud were unfounded.

Katina Granger, a public relations senior manager at ES&S, told AFP: "The updating of poll book numbers, even after polls have closed, is normal behavior for an electronic poll book."

She said: "In locations where connectivity is slow or when there is a high amount of volume being shared by the secure network, these transactions may see delays uploading, downloading, and syncing."

Additionally, there is no evidence of widespread malfeasance affecting voting machines in the 2022 midterms.

The Cybersecurity and Infrastructure Security Agency said in a November 9 statement: "We have seen no evidence that any voting system deleted or lost votes, changed votes, or was any way compromised in any race in the country."

AFP has fact-checked other false and misleading claims about the midterm elections here.