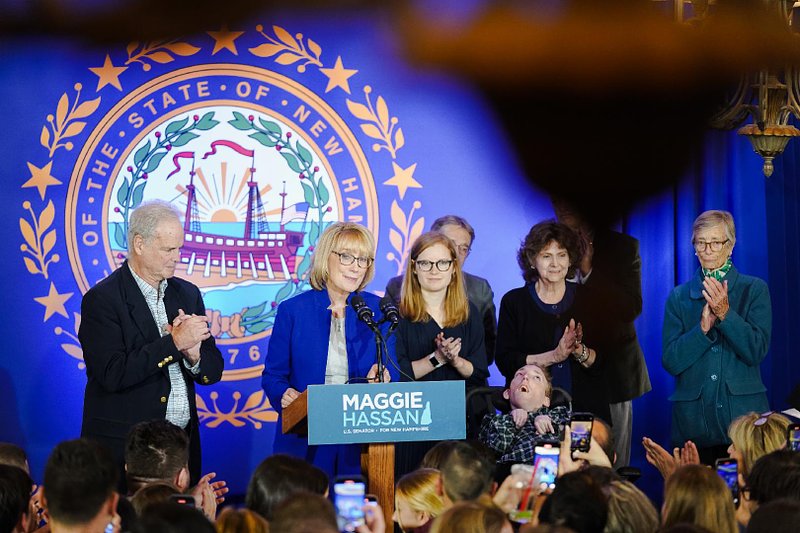 A widely shared headline from a website known for spreading election-related misinformation claims US Senator Maggie Hassan received more than 1,100 votes from a town with fewer than 700 inhabitants, suggesting her count was inflated by fraud. This is misleading; the New Hampshire secretary of state's office said the discrepancy was due to a typo that was corrected in the town's reporting of unofficial results, and that the Democratic incumbent candidate actually received 106 votes, not 1,106.

"Another Democrat Miracle! Maggie Hassan Wins 1,100 Votes from Town with Population Under 700," says the headline on a November 13, 2022 article from the Gateway Pundit, a conservative website, which cites a post on a conservative blog site called the Granite Grok.

"Being a Democrat has its perks," the Gateway Pundit article says. 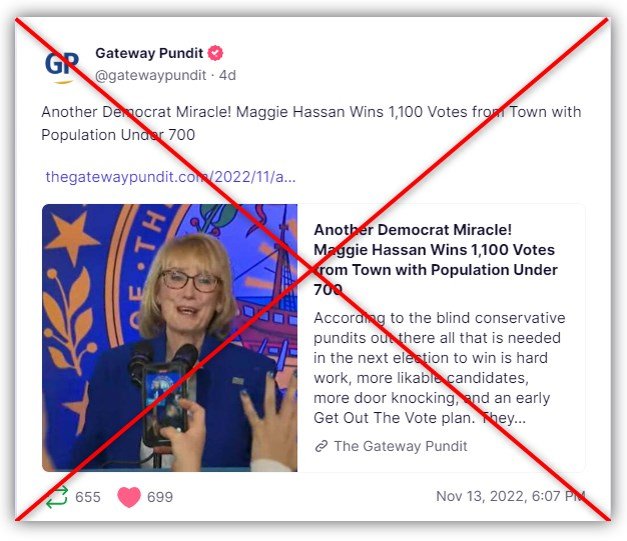 The articles and their claims were shared across Instagram, Facebook and other social media platforms, including by MyPillow CEO Mike Lindell, a US businessman turned promoter of conspiracy theories about fraud and voting machines after the 2020 US presidential election.

The allegations concern Columbia, a town in northern New Hampshire that reported a population of 659 people for the 2020 Census.

The discrepancy in Hassan's original vote total from Columbia was the result of a "simple typo" carried over from the town's submission of its preliminary results, the New Hampshire secretary of state's office said in a November 14 press statement shared with AFP.

"Following General Election night, theSecretary of State’s Office originally reported that US Senate candidate Maggie Hassan received 1,106 votes in the town of Columbia, Coos County based on information submitted on the official 'Return of Votes' form," the statement said. "The reported number far exceeded the number of ballots actually cast in the town. The Secretary of State has confirmed with the town clerk of Columbia that Senator Hassan only received 106 votes on election night. The original figure entered was a simple typo. Senator Hassan’s adjusted vote total for Coos County is 6,059 while Republican candidate Donald Bolduc received a total of 6,491 votes."

Marcia Parkhurst, the town clerk of Columbia, told the Conway Daily Sun and other local news outlets that what the secretary of state's office interpreted as an extra "1" on the town's handwritten election returns was actually a stray pen mark made at the end of a long day.

AFP reached out to the town for additional comment, but no response was forthcoming.

Election results available for download on the New Hampshire secretary of state’s website as of November 18 show Hassan with 106 votes to Republican challenger Don Bolduc's 193. A total of 309 ballots were cast in the town.

Statewide, the results show Hassan -- who US media projected as the winner the night of the November 8 election -- with approximately 56,000 more votes than Bolduc, who has publicly conceded defeat.

Michael Herron, a professor of government at Dartmouth College in Hanover, New Hampshire and an expert on election administration, said scattered human errors are to be expected given the complicated nature of elections and amount of data involved with voter registrations and election results.

"Any system will have errors on occasion, and an error does not mean fraud or any sort of vote manipulation," Herron said. "Elections involves all sorts of numbers, and so I don't think it should surprise any of us ... when there are occasionally errors and they're corrected."

He added: "There's no evidence that errors favor one party or another."

The US Cybersecurity and Infrastructure Security Agency said in a November 9 statement that it has seen "no evidence that any voting system deleted or lost votes, changed votes, or was any way compromised in any race in the country."

AFP has debunked other misinformation about the midterms here.