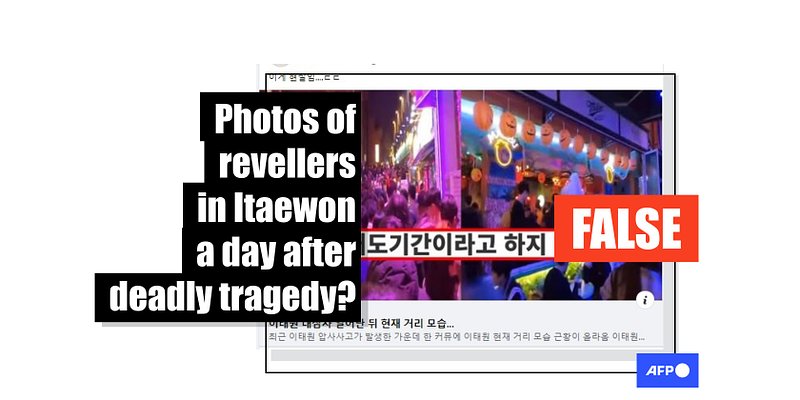 Pictures of revellers in Seoul's Itaewon entertainment district have been shared alongside a false claim that they show people celebrating Halloween in the neighbourhood just one day after a crowd crush killed at least 156 people in the area on October 29, 2022. But the images were taken from a video that appeared on YouTube hours before the incident unfolded. The YouTube user who posted the video said it was filmed on October 28, 2022, one day before the fatal crush. AFP photos show the incident site and its surrounding area were cordoned off to the public.

"This is the reality," reads the Korean-language post uploaded here on Facebook in the afternoon of October 31, 2022.

The post includes a link to an article from South Korean tabloid website NewsDailyW, titled: "Current view of streets in Itaewon after the disaster".

The link's thumbnail is a montage of two photos showing a crowd of people on the streets decked with Halloween decorations.

Korean-language text on the photo montage reads: "Didn't the authorities say this was a period of mourning?" 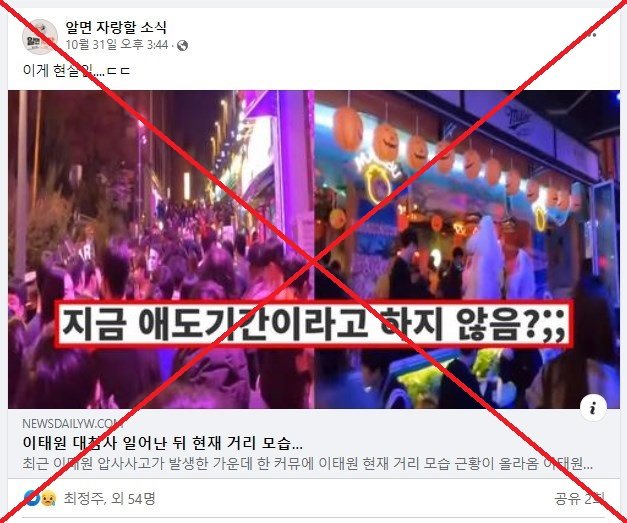 The NewsDailyW article published 16 photos that purport to show Seoul's Itaewon nightlife district one day after a Halloween crowd crush that killed at least 156 people on October 29, 2022.

The article reads in part: "Several images posted in an online community forum show the present state of Itaewon after the accident.

"Even after the accident, there are so many people on the street. Even a little child can be seen dressed in a costume.

"And people are walking around in the alley where the accident happened as if nothing was wrong. It is almost eerie.

"There are people putting on makeup and others wearing costumes to advertise their products. Some people are taking photos."

On October 30, a day after the Itaewon tragedy, the South Korean government announced a national mourning period, which ended on November 5.

An identical claim was also shared on Facebook here, here and here on October 31.

A keyword search found that the photos corresponded with scenes captured in this video, posted on YouTube by a user called Indiana Chung, alongside the hashtags #halloween and #2022.

Using Google's YouTube Data API tool, AFP found the video was posted on YouTube at 12:43 am on October 29 -- more than 21 hours before the deadly crowd crush happened in Itaewon at around 10 pm.

The following day, on October 30, Chung posted a second, longer clip on YouTube, which contained the same scenes.

It is titled: "Itaewon Friday around 10 pm, 24 hours before the crowd crush."

According to the video's description, the footage was taken at around 10 pm on Friday, October 28, 2022 -- or 24 hours before the fatal crowd crush occurred.

"On Friday, I had a hard time being pushed around by the crowd, but there was no crush," Chung also wrote in the description.

All of the images shared in the NewsdailyW article are screenshots from the longer YouTube video.

Below are comparisons of selected pictures from the NewsdailyW article (left) and screenshots from the YouTube video (right) -- AFP has added timestamps to the screenshots taken from the clip. 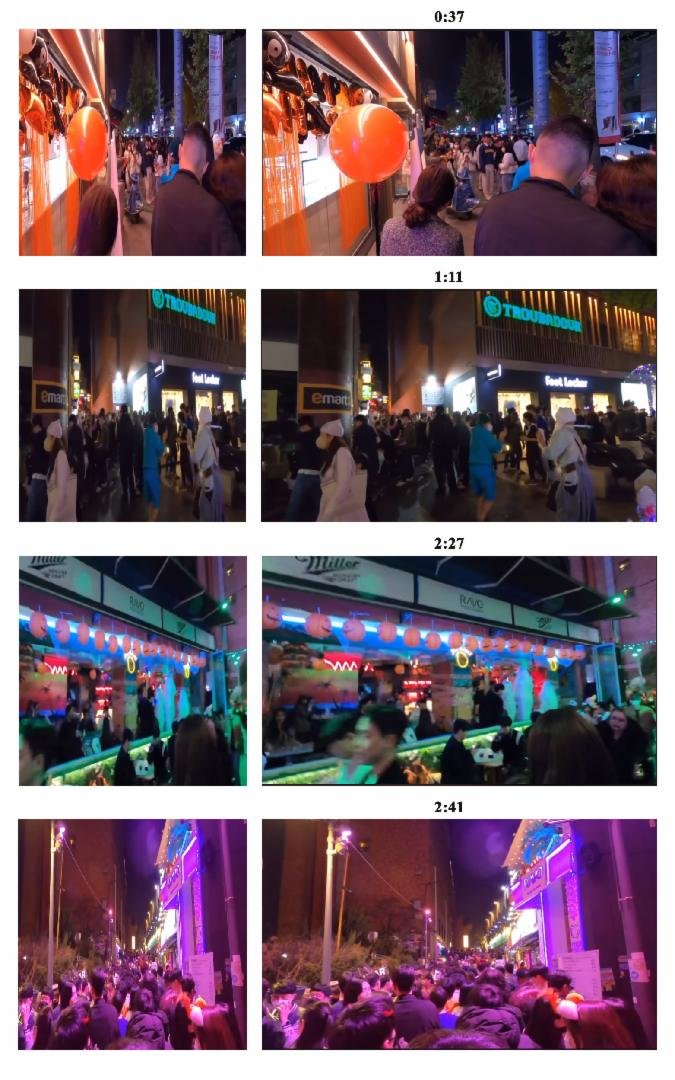 Since the disaster, the location where it happened and the immediate vicinity, as seen in the misleading images, have been cordoned off by police amid an ongoing government investigation.

AFP photos shot on October 30 andOctober 31 show the police cordoning off the alley where the deadly crowd crush occurred. 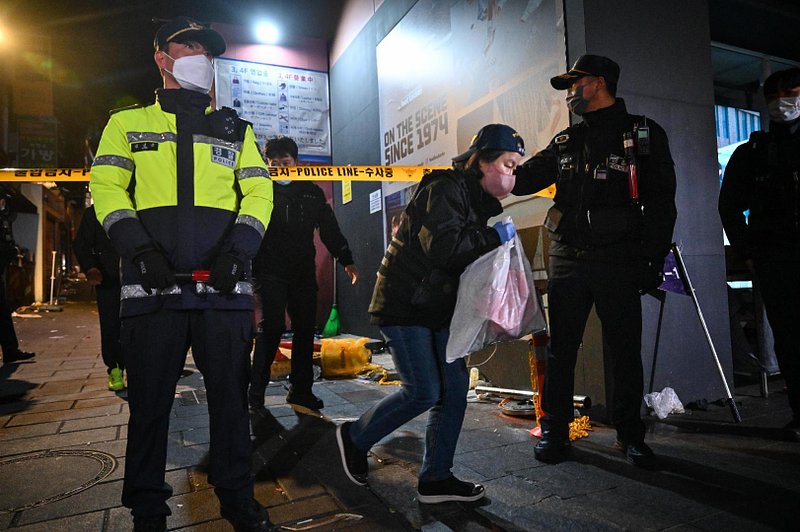 A police crime scene investigator carries a plastic bag as she walks from the alley, where a Halloween stampede took place, in Itaewon neighbourhood in Seoul on October 30, 2022. ( AFP / Anthony Wallace) 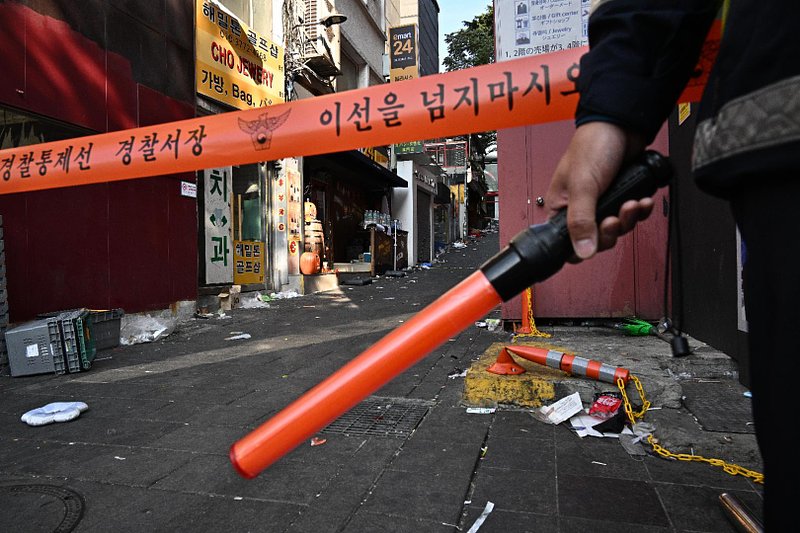 A police officer stands guard at the cordoned scene on October 31, 2022, two days after a deadly Halloween crush in Itaewon district in Seoul. ( AFP / Anthony Wallace)

When an AFP journalist interviewed eyewitnesses at Itaewon on October 30, the alley was closed off to the public and no revellers were seen in the neighbourhood.

Hundreds of flowers were laid in a makeshift memorial for the victims on the main road adjacent to the accident site, as seen in AFP photos from November 1 and November 3.