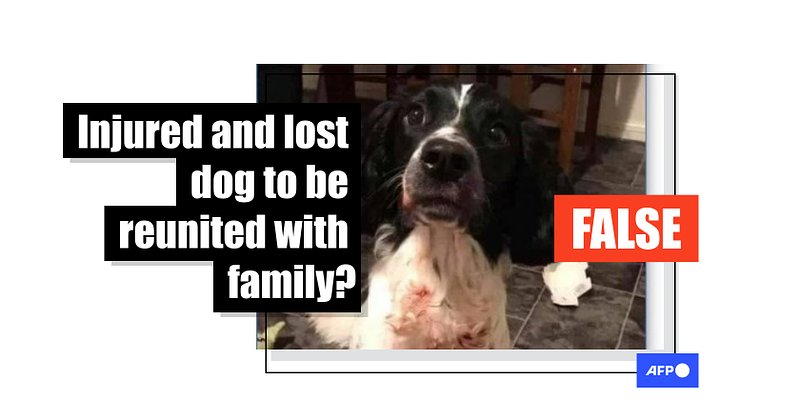 A widely shared post on Facebook claims that a bloodied dog was picked up "half an hour ago" and rallies users to help spread the word and reunite the canine with its family. But the news, which surfaced on Zimbabwean accounts, is a hoax: the dog was neither missing nor injured -- and its photo first appeared online in Northern Ireland in 2017.

“I’m desperately trying to find the owner of this sweet girl I picked up about half an hour ago alongside the road in CENTRAL FALLS. She has been taken to the vets but does not have a chip,” reads the post, which has garnered more than 2,000 shares since October 25, 2022.

“Please help bump this post so she can be reunited with her owner asap,” it adds.

Each post is amended to include the name of the town matching the community group where it was posted -- a trend that AFP Fact Check has observed across several hoaxes (here, here and here) linked to a network of Zimbabwean Facebook accounts.

A reverse image search of the apparently wounded spaniel’s picture led to an article about a dog named Pogo that gave his Northern Ireland owners a fright after they found him covered in red hair dye -- which looked like blood.

“Mummy died her hair red last week and it's awesome! While they were out tonight, I tried the same!! (sic)” reads the original Instagram post by his owners on September 10, 2017.

The then-puppy had managed to chew up a bottle of dye, and according to a throwback post on January 29, 2021, it took about three months to wash the colour out.

The Zimbabwe-based network of Facebook accounts has been flooding yardsale groups and other similar community groups across the United States and Canada with false information.

The trend caught the attention of authorities in Ohio and the Athens County Sheriff’s Office posted a statement on August 25, 2022, addressing the spate of scam posts.

“While there are legitimate posts regarding missing people, injured animals, home rentals, and public safety notices on social media, please make sure that the information you are sharing comes from a trusted source,” read part of the statement.

The comment section of the false post showed growing frustration from Facebook users exasperated by the significant number of scam posts they have been observing in the last few months. 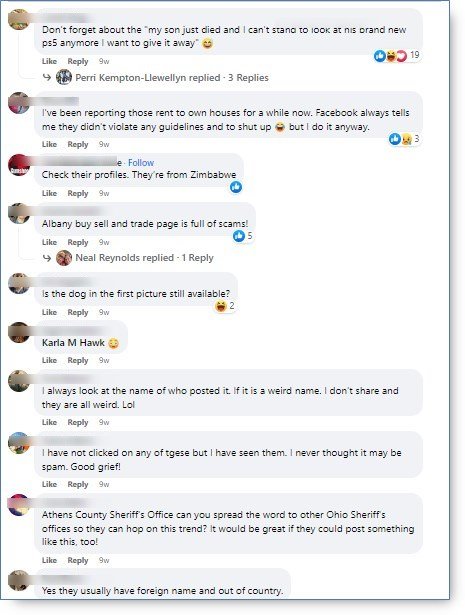 AFP Fact Check has noted a few common traits among the accounts in this network: they had little or no previous activity, and, in most cases, the comment sections were closed, making it difficult for anyone to warn users that they were being misled.

A possible motive for the hoaxes is to boost page engagement. The fictitious claims in the post are eventually edited and replaced with a financial scam designed to solicit personal information.