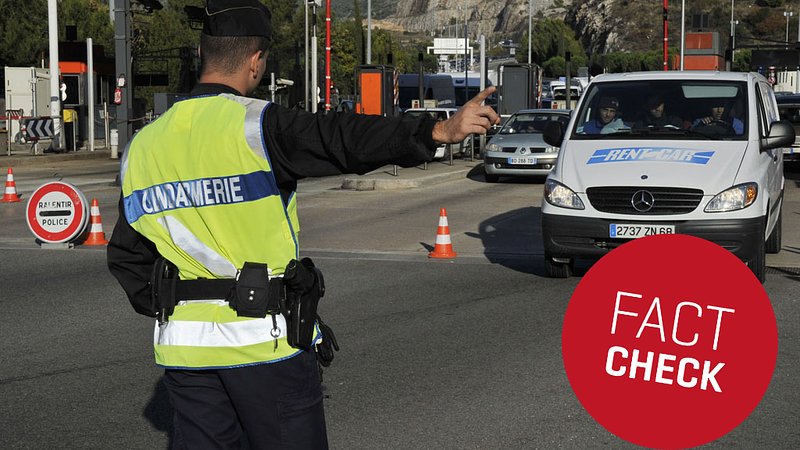 Some internet users recently claimed that France will "close its borders from 1 November".

The rumour is based on the translation of an article in a Portuguese news outlet. However, this is a clear misinterpretation of the Schengen agreement, explains AFP.

This assertion is misleading, as several legal experts pointed out to AFP: France is only going to extend, as of said date, the temporary control at the internal borders of the Schengen area, according to a procedure deemed to remain exceptional and used to face "a serious threat to public order or internal security". However, France has been applying this measure continuously since 2015, in particular to combat terrorist threats. The measure has also been the subject of several legal challenges from migrant aid associations.

"France is closing its borders from 1 November," internet users have been sounding the alarm on Facebook (1, 2, 3), Twitter, and Telegram. As a source, many shared a screenshot of a translated article from the Portuguese weekly Sabado, the headline of which reads: "France warns EU countries it will close its borders." 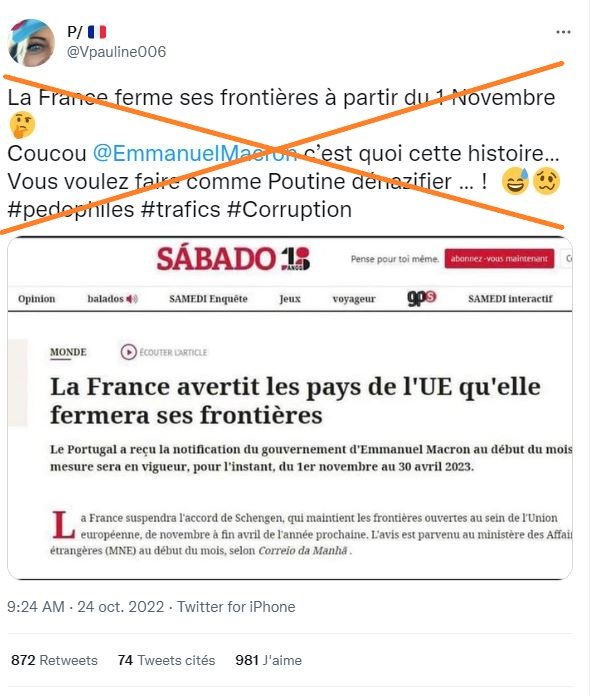 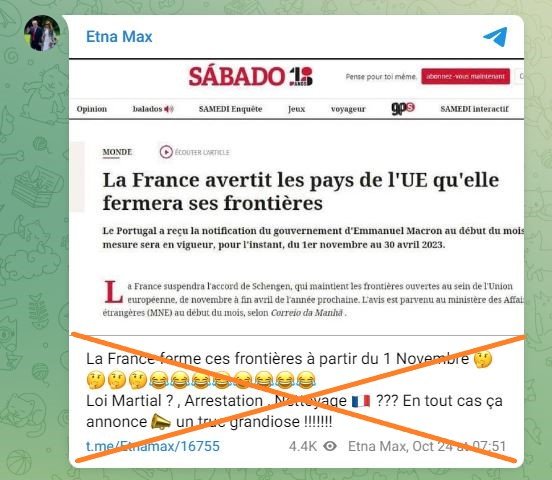 But while France has informed the other 25 member states of the Schengen agreement of a "temporary reintroduction of internal border controls" for six months, lasting from 1 November 2022 to 30 April 2023, the claim that it is "closing its borders from 1 November" is misleading.

"It is wrong to speak of a 'closure' since it is a question of reestablishing internal border controls, a procedure that complies with the Schengen Borders Code, which specifies that it remains exceptional and must respect the principle of proportionality," Géraldine Renaudière, a lawyer and analyst for the International Migration Division at the Organisation for Economic Co-operation and Development (OECD), told AFP.

"There is no closure, but a temporary reintroduction of border controls at the internal borders of the Schengen area", agrees Gaëlle Marti, professor of public law at the University of Lyon 3, stressing that this measure is conditional, according to Article 25 of the Schengen Borders Code, on the existence of a "serious threat to public order or the internal security of a member state".

Moreover, as Eric Landot, a lawyer at the Paris bar, points out, such a process "is not new". It has in fact been in force for years in France, with the country having carried out this temporary reintroduction of controls at the internal borders of the Schengen area on a continuous basis since 2015.

The latest one, covering the period from 1 May to 31 October this year, ends on the eve of the planned reintroduction on 1 November for a variety of reasons: "new terrorist threats, organised crime ... risk of arrivals of potentially threatening people among the influx of refugees, illegal migration, ... situation at the external border (war in Ukraine)."

The Commission points out on its website that it "may give an opinion on the necessity of this measure and on its proportionality, but it cannot veto a decision by a member state to reintroduce border controls."

"The opinion may give rise to joint meetings between concerned states and the Commission to find a way of proceeding collectively, but there is nothing binding, it remains an open dialogue," emphasises Géraldine Renaudière.

"The second case is Article 29, which has a slightly more collective dimension. The duration of the reestablishment of controls is longer, up to two years, and the measure does not come from a member state but from a recommendation of the Council of the European Union on the basis of a proposal from the Commission. This is a case of exceptional circumstances linked to a serious failure of the external borders, which could affect the whole Schengen area", the specialist continued.

Interior border checks in place in France since 2015

A number of states, including Germany, resorted to article 29 during the influx of Syrian refugees into Europe in 2015, as detailed in a Senate report of March 2017. As outlined in the respective document, "France reestablished border controls on 13 November 2015, for a period of one month, in anticipation of the Paris Climate Conference (COP 21) being held on its territory. Following the Paris attacks on the same evening, these controls were tightened and extended initially until 26 May 2016, and then three times, until 15 July 2017, due to a 'permanent terrorist threat'."

Since then, France has consistently reintroduced these internal border controls every six months, each time ahead of the expiration of the previous deadline, citing this terrorist threat - and, almost systematically since March 2020, the Covid-19 pandemic, as can be seen in the history of reintroductions established by the European Commission.

"France is not the only country to have requested successive extensions, Sweden, the Czech Republic, and Austria are also doing the same, for instance," Emmanuelle Saulnier-Cassia, a professor of public law at the University of Versailles Saint-Quentin-en-Yvelines, told AFP.

This also shows that before 2015, France only reestablished these controls in targeted manner and for shorter periods of time, notably on the occasion of major events such as the G20 summit held in Cannes in autumn 2011.

Faced with this continued use of a measure initially used as an exception, and which runs counter to article 1 of the Schengen Borders Code, which regulates "the absence of border controls for people crossing internal borders between member states of the Union", several migrant aid associations - Anafé, Cimade, and Gisti - lodged an appeal with the Council of State against the extension of these controls beyond 31 October 2017.

However, this appeal was rejected, as was the second appeal concerning the extension planned between 1 November 2018 and 30 April 2019. 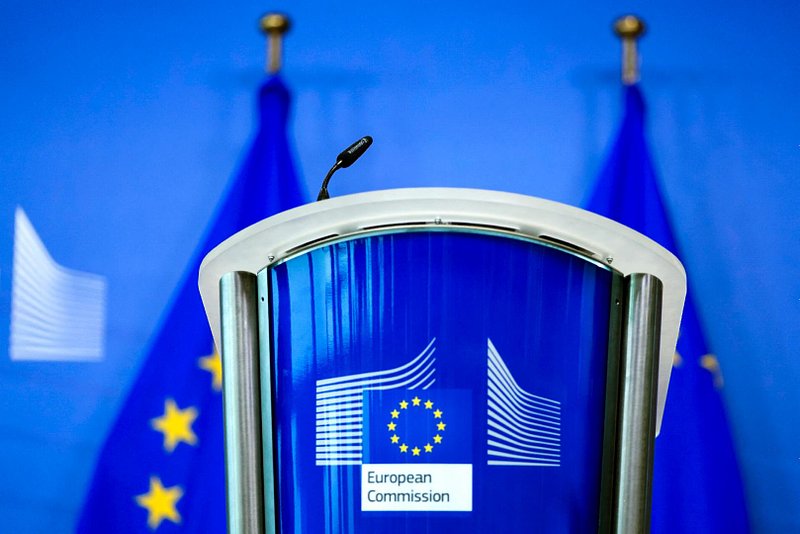 In a decision dating to 26 April 2022, which related to a similar dispute in Austria, the Court of Justice of the European Union (CJEU) retained that article 25 of the Schengen Borders Code "must be interpreted as precluding the temporary reintroduction of internal border controls by a member state ... if the duration of that reintroduction exceeds the total maximum period of six months ... and if there is no new threat justifying the reapplication of the periods provided for in article 25".

Based on the CJEU decision, Anafé, Cimade, Gisti, and the Human Rights League of France filed a new application for annulment in May 2022, this time against the extension of the temporary reintroduction of controls at all internal borders of the Schengen area from 1 May to 31 October 2022.

But the Council of State rejected this request in a decision on 27 July 2022, considering that the main reasons invoked by the government to extend these internal border controls did in fact represent a "new threat".

"A threat may thus be considered as new, within the meaning and for the application of these provisions, either when it is of a different nature than those of previously identified threats, or when new circumstances and events change its characteristics in such a way as to modify its topicality, scope, or consistency. Such circumstances and events may relate, in particular, to the purpose of the threat, its scale or intensity, its location, and its origin", the Council of State outlined.

While Interior Minister Gérald Darmanin welcomed the decision in a Tweet, noting that "these controls are necessary to prevent the risk of terrorism as much as possible and to monitor migratory flows", the Gisti countered with the fact that "the arguments of public order and internal security are in fact used as a pretext to control migrants near the borders, engendering a series of illegal practices: violence, non-respect of asylum rights, confinement, etc."

In its latest renewal, effective from 1 November 2022, France no longer invokes Covid-19 as a threat, but does so for a set of elements, including "new terrorist threats".

"As new terrorist threats are permanent, it is indeed more secure in law, and without a doubt not wrong in fact, to change the reason every six months," believes Eric Landot.

Proposals for revision of the Schengen Border Code

As the European Commission cannot veto any new measure by France to temporarily reintroduce internal border controls, "its only possible action would be an action for failure to fulfil obligations against France, either because of the contradiction between the government's extension decisions, which it could consider contrary to the Schengen Code ... or because of the Council of State's inaccurate application of European Union law for the same reasons", stresses Emmanuelle Saulnier-Cassia.

"But it would be a very political decision, and that is not obvious: imagine that there is a terrorist attack on French soil after the Commission has filed an action for failure to fulfil an obligation or that the Court has declared the State to be in breach of an obligation, it would obviously be terrible for the European Union, which would be considered to be at fault in public opinion," she continued.

On 14 December 2021, the European Commission presented proposals for revisions to the Border Code, including "the use of effective alternatives to internal border controls, in the form of reinforced and more operational police controls in border regions", while at the same time stating that it wanted to "ensure that internal border controls remain a measure of last resort and last only as long as strictly necessary."