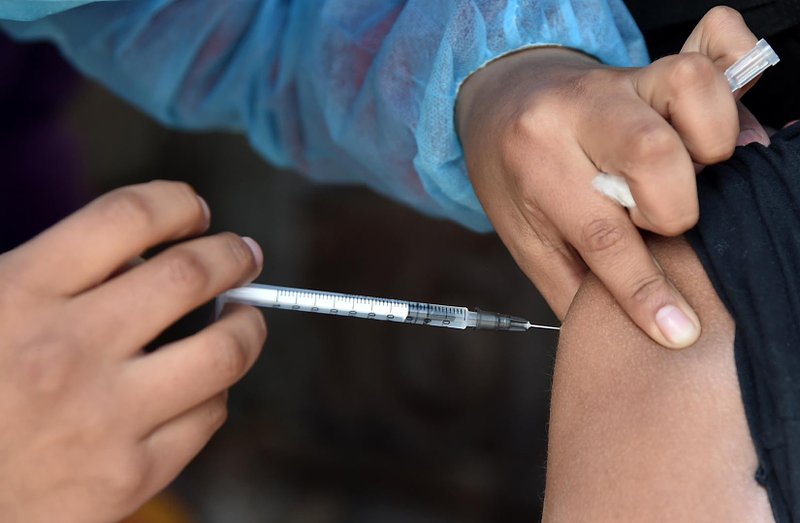 Covid-19 vaccines are not linked to cancer according to scientists, contrary to misleading posts that circulated worldwide in October. The posts misrepresented a news report about two pre-pandemic studies -- both unrelated to Covid-19 vaccination -- that looked into rising cancer cases among people under age 50.

It shows screenshots of a November 2021 Reuters fact check titled, "No evidence COVID-19 vaccines cause cancer"; and an October 2022 CNN article with the headline, "A global epidemic of cancer among people younger than 50 could be emerging".

It also features an image of Charlie Kelly, a character from the US sitcom It's Always Sunny in Philadelphia, popularly known for claiming to have stumbled on a conspiracy. 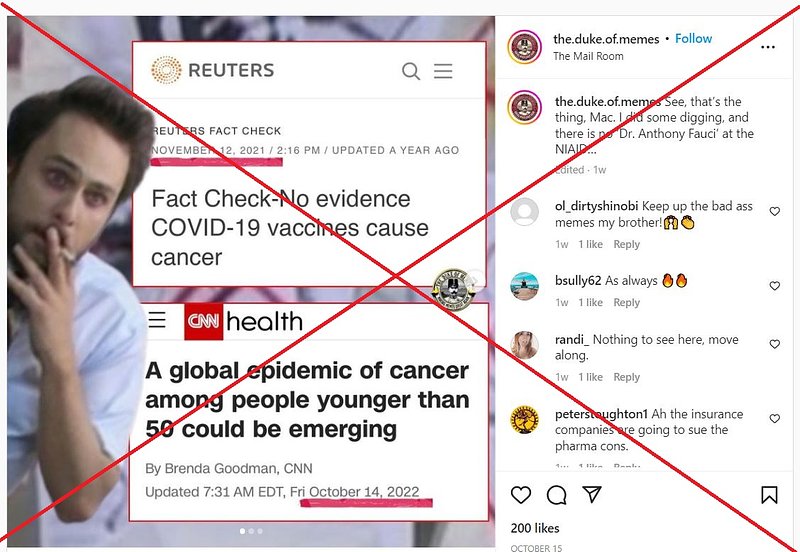 A screenshot of the misleading post, captured on October 26, 2022

The meme circulated worldwide in social media posts by users based in Australia, the US, Greece and Russia.

One said: "Put an untested, experimental drug in your system for no real reason and find out."

"Nothing to do with fake vaccines," said another sarcastically.

But scientists have found no evidence of a link between Covid-19 vaccines and cancer. AFP previously debunked a similar claim here.

Nicholas Wood, associate director for Australia's National Centre for Immunisation Research and Surveillance, told AFP: "There is no confirmed link between Covid vaccine and cancer development."

A review of the CNN article found it makes no reference to Covid-19 vaccines.

The report says two studies indicate cases of early-onset cancer -- those in people younger than 50 -- have been increasing globally.

But the studies cited in the CNN report analysed pre-pandemic data and therefore do not relate to Covid-19 vaccines.

The report first talks about the findings of a study titled: "Is early-onset cancer an emerging global epidemic? Current evidence and future implications". It was published in the monthly peer-reviewed journal Nature Reviews Clinical Oncology in October 2022.

"Data were obtained from 44 countries that provided age-standardized data on cancer incidence for the period 2002–2012," a portion of the study reads.

Covid-19 was first detected in late December 2019 and no coronavirus vaccines were trialled or approved before then.

The study did not find any link between Covid-19 vaccines and cancer, Tomotaka Ugai, a research fellow at Harvard T.H. Chan School of Public Health and one of the authors, told AFP on October 26.

The CNN report cited a second study titled "Increasing Incidence of Early-Onset Colorectal Cancer". It was published in the New England Journal of Medicine in April 2022.

According to the report's authors, the study analysed: "Trends in Colorectal Cancer Incidence (1995–2016) and Mortality (1970–2017) in the United States, According to Age and Sex."

It found the incidence of early-onset colorectal cancer has been increasing for the indicated period.

Study author Frank A. Sinicrope, an oncologist at the Mayo Clinic Alix School of Medicine, did not immediately respond to AFP's request for comment.