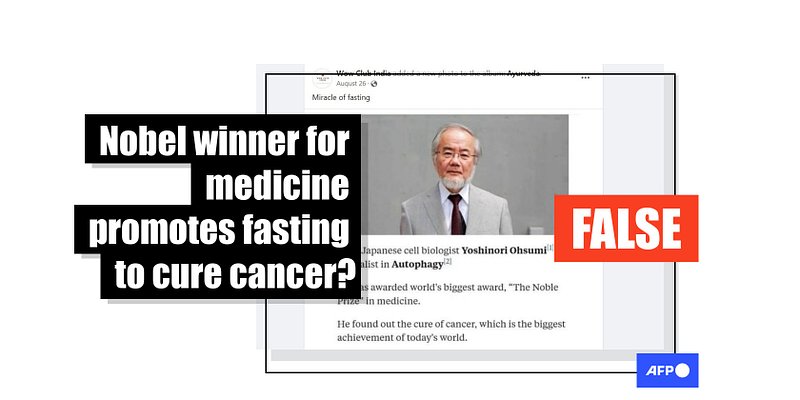 False social media posts with tens of thousands of shares worldwide claim the Japanese scientist Yoshinori Ohsumi, who won the 2016 Nobel Medicine Prize, recommended fasting to cure cancer. Ohsumi's research has led to a new understanding of how disruptions on cell "recycling" can cause diseases such as cancer. However, AFP did not find evidence he made the remarks in the posts. Multiple health experts told AFP fasting does not cure cancer and warned doing so could be dangerous for patients.

It features a photo of Ohsumi alongside text that claims the Nobel laureate recommended that patients take up fasting to "kill cancer cells".

The post states: "He is Japanese cell biologist Yoshinori Ohsumi, specialist in Autophagy.

"He was awarded world's biggest award, 'The Noble Prize' [sic] in medicine. He found out the cure of cancer, which is the biggest achievement of today's world.

"He discovered that when we fast for 10-12 hour in a day, the energy already present in body is used up. With time, when appetite becomes intense the body starts to eat the cancer cells.

"He said we should fast 20 days maximum in a year to eradicate/kill all the cancer cell." 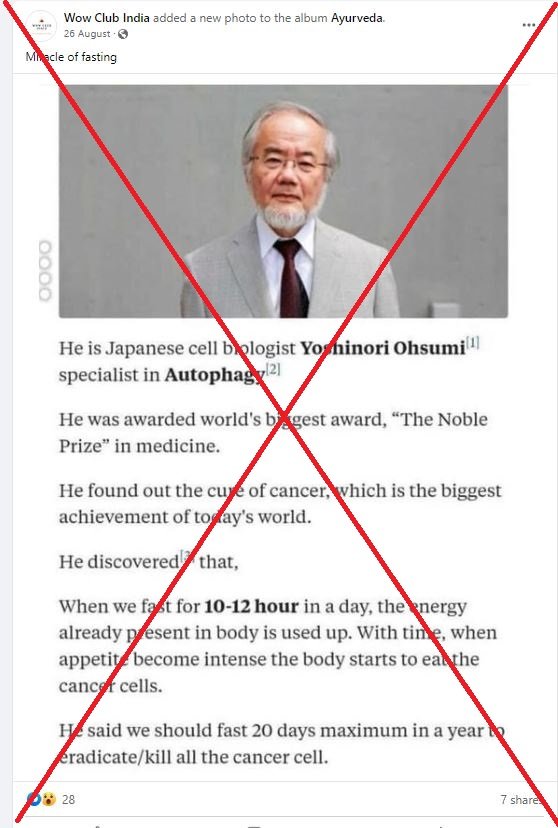 Ohsumi won the Nobel Medicine Prize in 2016 for his work on autophagy -- a process whereby cells "eat themselves".

The process is essential for the orderly degradation and recycling of damaged cell parts and its failure is believed to be responsible for ageing and cell damage.

He then went on to explain the underlying mechanisms for autophagy in yeast and showed that similar sophisticated machinery is used in human cells.

The false claim was repeatedly shared on Facebook in countries such as India, Nepal, Malaysia and Thailand.

AFP has previously debunked similar false claims that have circulated tens of thousands of times in French-language Facebook posts here.

Responding to the posts, a public relations officer at the Toyko Institute of Technology where Ohsumi is currently a professor told AFP on October 27, 2022 that he did not make the remarks.

AFP talked to several medical experts who said fasting is not recommended for cancer patients.

Lucile Espert, a researcher of autophagy and infections at the French National Centre for Scientific Research, told AFP on October 6, 2022: "Fasting from time to time does not harm the organism, and perhaps it is thanks to autophagy that it is not negative.

"But to say that it cures diseases is dangerous."

"When you are undernourished, it aggravates the pathology so it is very deleterious."

Pierre Sonveaux, professor at the Catholic University of Louvain and specialist in experimental cancer research, told AFP on the same date that cancer patients should avoid making changes to their diet.

"If you change your diet, you absolutely have to talk to your doctor."