Facebook posts shared hundreds of times in Bangladesh claim that the United Nations has named Bangladeshi Prime Minister Sheikh Hasina as the "world's second best prime minister". This is false. A UN spokesperson said it does not grant such an award. As of October 16, 2022 there have been no official reports to support the claim.

The claim was shared here on Facebook on September 23, 2022, alongside a photo of the Bangladeshi Prime Minister Sheikh Hasina.

It was shared on an unverified page for Zahid Maleque MP, Bangladesh's minister for health and family welfare, which is regularly promoted by the department's official Facebook page.

The post's Bengali-language caption translates to English as: "Congratulations! Sheikh Hasina, our honourable prime minister, successful statesman and leader of millions of people, has been named as the second best prime minister in the world by the United Nations." 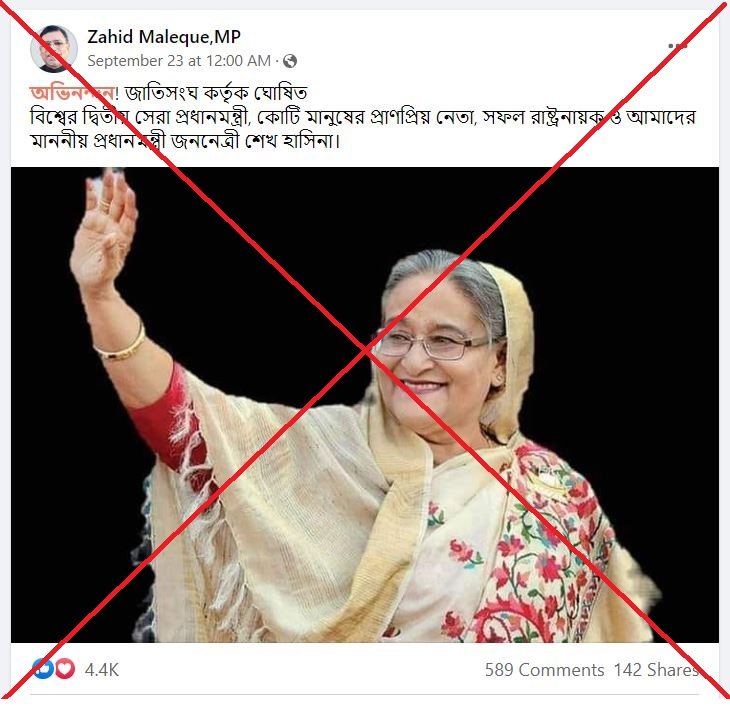 "This is a big achievement for the nation."

The claim was also shared on Facebook here, here and here.

The posts began to circulate online after Hasina, who has served as the country’s leader since 2008, addressed the UN General Assembly on September 23.

Speaking in New York, Hasina reflected on the impact of the Covid-19 pandemic, the Rohingya crisis, and Bangladesh's decision to support a UN resolution that condemned Russia’s "illegal" annexation of four regions in Ukraine.

However, the claim is false: as of October 16, 2022 there have been no official reports that the UN has named Hasina as "the world's second best prime minister".

Stephane Dujarric, a spokesperson for the UN secretary general, told AFP: "There's no such prize awarded by the UN."

A similar hoax has circulated online since 2018 and resurfaced in September 2022.

In March 2018, some Bangladeshi media outlets, including RTV and Dhaka Tribune, reported that Hasina had been congratulated by her cabinet for being named as the "world's second best prime minister".

The claim, however, was debunked by several local-language media outlets, including the BBC's Bengali service and Jachai.

BBC Bengali reported in November 2018 that it was not able to find the website of "The Statistics International", saying: "It is unusual for an organisation that surveys heads of government not to have a website."

Keyword searches found that Hasina's name did not appear in any of the latest worldwide leader rating polls, including this one released by Morning Consult, a US-based business intelligence company.