Social media posts warn of a colourful caterpillar whose sting purportedly killed two people after it infested farmland in India. The claim is false; the posts show photos of a man and a boy fatally struck by lightning, not stung by a caterpillar. An entomologist said that while human contact with the creature could result in painful skin irritation, there had been no reports of it killing people.

"An insect whose sting can instantly kill people has infested the fields," reads a Hindi-language Facebook post shared on September 19.

The post features graphic photos of people lying in a field and pictures of a spiky, bright green caterpillar. 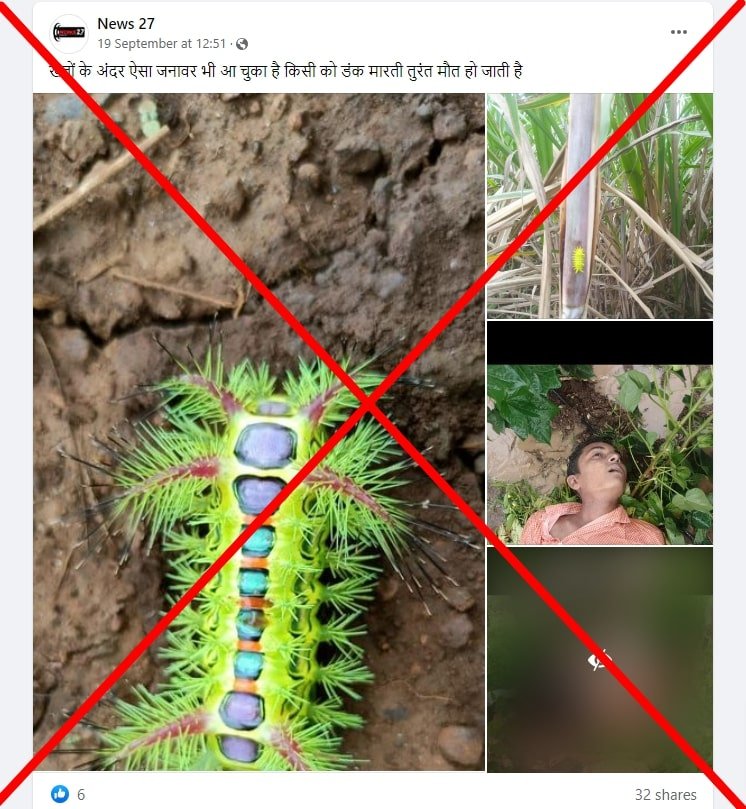 A screenshot of the misleading post captured on September 26, 2022

A reverse image search found one of the photos of a man lying on the ground in a YouTube video posted by a channel that regularly debunks animal-related misinformation.

Team AZN said that social media users had linked the photo to a lightning strike in either Karnataka, Maharashtra or Telangana.

Further keyword searches in the regional languages of those three states found a news report about a farmer and his son who were killed when they were struck by lightning in Chalisgaon in Maharashtra.

The report, which was posted on YouTube on September 9 by local outlet Aadhar News, was headlined: "Lightning strike killed father and son in Chalisgaon".

The 45-year-old farmer and his 14-year-old son were fatally struck by lightning after taking shelter under a tree during a thunderstorm on September 9, Aadhar News reported.

His wife survived with minor injuries, it said.

The images in Aadhar News's report correspond to the ones shared in a false context on social media.

Entomologist Dr Shashank, who goes by one name, of the Indian Agricultural Research Institute identified the creature in the photos as a Limacodidae larvae, commonly known as the cup moth caterpillar.

"Until now, there have been no reports of them causing death to humans," he told AFP.

"The hairs on larvae produce irritating chemicals upon touching and most of the species cause burning pain and rash or urticaria."

He said that symptoms can last between 15 minutes and a number of hours.