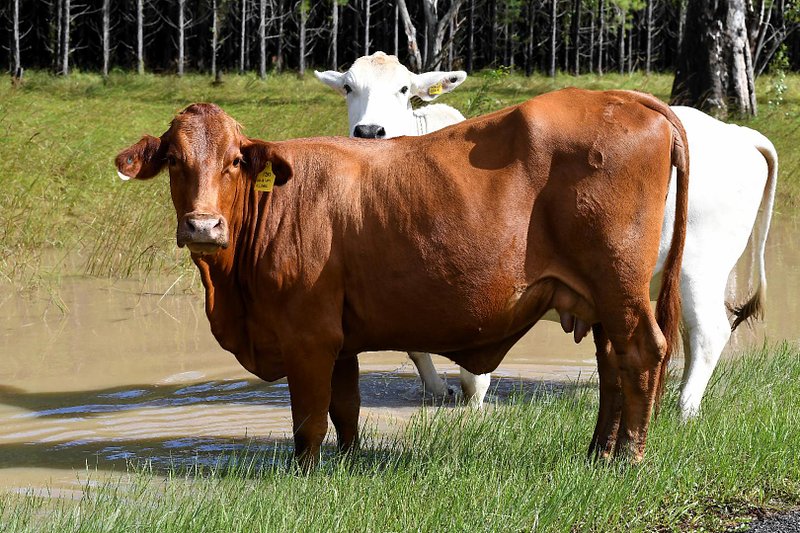 An Australian anti-vaccine campaigner has falsely claimed the state of New South Wales has "forced farmers to vaccinate their herd with mRNA jabs" that allegedly led to dozens of cattle deaths. Whilst mRNA vaccines for viral livestock diseases are in development, as of October 11, no such jabs were available or mandated for use for cattle in Australia. AFP has not found evidence the incident described in the posts actually occurred.

"A friend informed me today that her neighbor, a dairy farmer, is now forced to vaccinate her herd with an mRNA vaccine!" reads a portion of a screenshot posted on Instagram on October 2.

The same claim was also shared on his Telegram channel on October 2 and October 3, where it has been viewed more than 34,000 times. 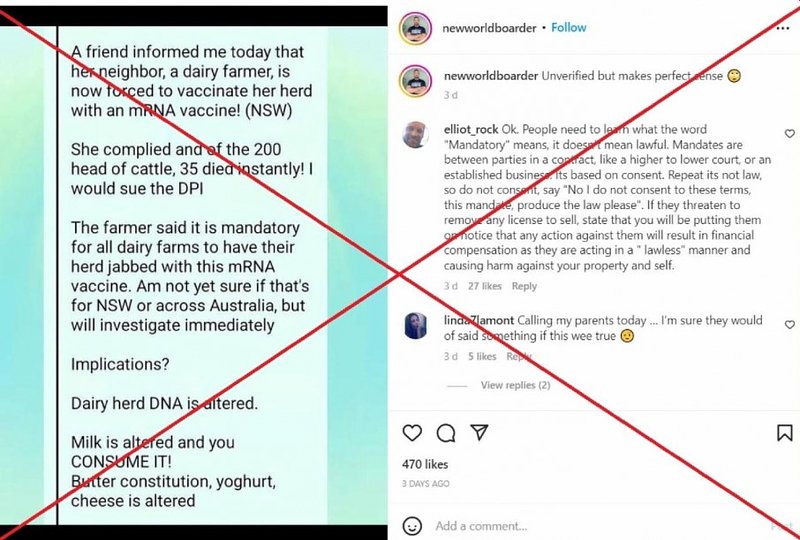 The claim surfaced after New South Wales announced on September 28 it had struck a deal with a US biotech firm to fast-track the development of mRNA vaccines for two viral livestock diseases.

The vaccines -- not expected to be ready until August 2023 -- are for foot-and-mouth disease and lumpy skin disease.

Australia's hyper-stringent biosecurity laws designed to protect the country's large agriculture industry means that authorities are on high alert following outbreaks of both diseases in Indonesia.

The screenshot also circulated in multiple countries, including in Australia and the United States.

The claim is false: there are no mRNA vaccines approved for use in livestock in Australia, as of October 11, 2022.

"There is no way that cattle here have been vaccinated by mRNA, let alone died from it," Pall Thordarson, director of the University of New South Wales' RNA Institute, told AFP on October 4.

A representative for New South Wales' deputy premier separately told AFP on October 11: "The NSW Government has not mandated the use of a vaccine in livestock -- our challenge is to develop one."

Vaccines that use mRNA technology are currently being used against Covid-19. They do not alter human DNA, experts told AFP.

These jabs deliver genetic instructions to build antigens directly into cells, effectively turning the body into a vaccine-making factory.

The mRNA vaccines being developed for animals are expected to work in a similar way as they do in humans, Thordarson said.

"Our DNA is very similar to other mammals (cattle, pigs etc) and indeed all animals (so fish and chicken included)," he told AFP.

The mRNA vaccines will have "no impact on animal products such as meat or milk", a spokesperson for the Department of Primary Industries, which oversees the state's agricultural industry, told AFP on October 5.