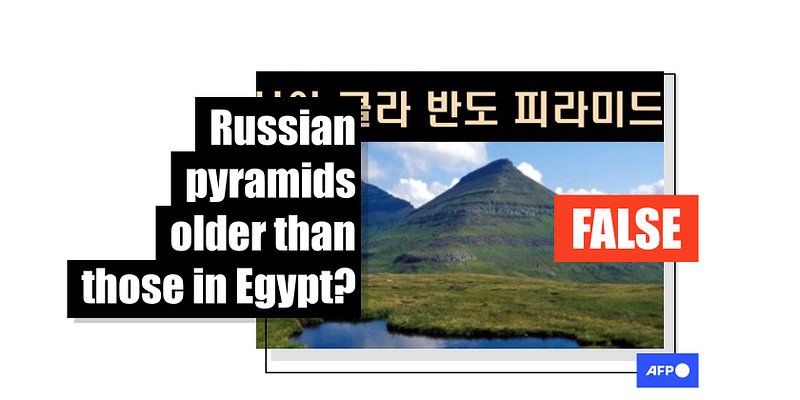 An image has been shared repeatedly in social media posts that claim it shows "pyramids older than those in Egypt" found in Russia's Kola Peninsula. But the photo in fact shows mountains on the Faroe Islands formed by millions of years of volcanic activity. An Egyptologist told AFP the oldest known pyramid in the world is the Djoser step pyramid found in Saqqara, Egypt.

"Russian pyramids older than the Egyptian pyramids," reads the Korean-language claim shared alongside the image here on Facebook on September 28, 2022.

The photo, labelled "Pyramids in Russia's Kola Peninsula," appears to show two pyramid-shaped mounds rising behind a grassy plain with a small body of water. 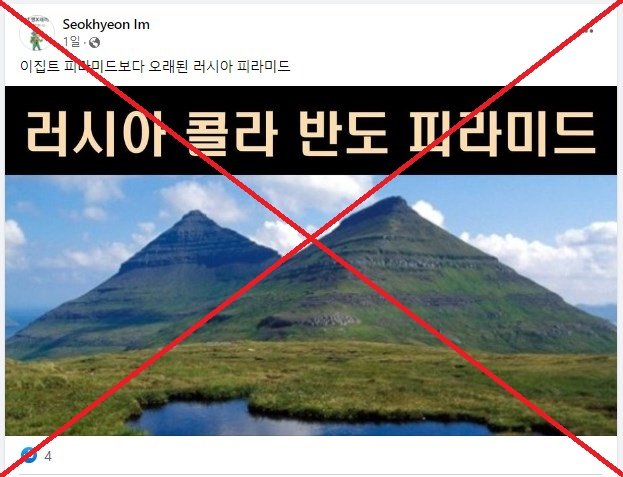 The same image was shared alongside a similar claim on Facebook here and here; on YouTube here; and on popular South Korean blogging platform Naver Blog here.

The image and claim have also circulated since at least 2019 in posts in various languages, including English, French, Italian and Russian.

An earlier version of the claim circulated in 2014, stating the "pyramid" was found in the Faroe Islands.

The image, however, shows two mountains in the Faroe Islands formed naturally by volcanic activity.

A Google reverse image search found a similar photo of the twin mounds and the body of water on the Adobe Stock photo website.

The image's caption reads: "Hiking to the top of the Klakkur mountain near Klaksvík, the second largest town of the Faroes behind Tórshavn, located on Borðoy Island, Norðoyar, Faroe Islands."

Below is a screenshot comparison of the image shared with the false claim on Facebook (left) and a similar Adobe Stock image (right):

Similar photos of the twin peaks can be seen here on a photographer's blog from August 21, 2017. The blog states the photos were taken near the town of Klaksvík on the Faroe Islands.

The approximate location of the photo can be seen here on Google Maps street view.

Klakkur is a popular site among landscape photographers visiting the Faroe Islands, according to its official tourism website.

Photos published to the site show the archipelago has generally mountainous terrain throughout, with other pyramid-shaped mountains such as Kunoyarnakki. The tourism site describes it as: "look[ing] like a natural pyramide (sic) when you look at it from the town of Klaksvík."

The layered look of these mountains and the islands' geography is the result of successive volcanic eruptions that built up a basalt plateau over time, according to the islands' official website, as well as geological studies of the area here and here.

AFP did not find news reports, announcements or studies that show ancient pyramids had been discovered in Russia's Kola peninsula, located adjacent to the Arctic Ocean on the country's northern shore near Finland.

Sources such as Egypt's Ministry of Tourism and Antiquities and the Guinness World Records state the oldest pyramid verified by experts is the Djoser step pyramid in Saqqara, Egypt.

It is believed to have been built during the reign of a king of ancient Egypt's Third Dynasty from approximately 2650 to 2575 BCE.

University of Bristol Egyptologist Professor Aidan Dodson told AFP: "The Djoser pyramid is very definitely the oldest known one in the world."