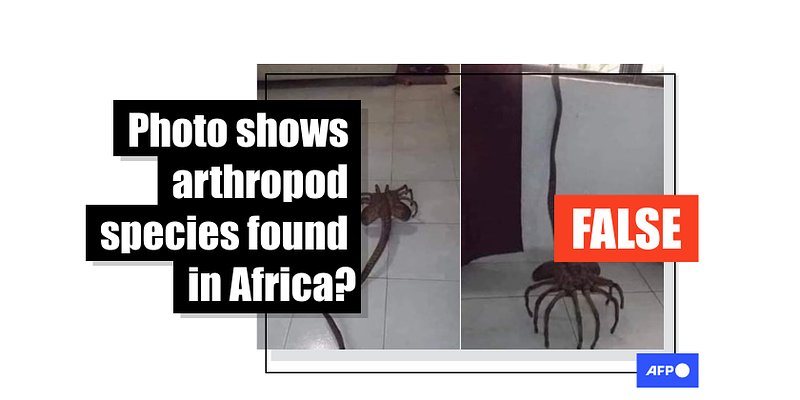 A post shared thousands of times on Facebook in South Africa claims to show a picture of a daunting-looking arthropod species that has purportedly found its way to Africa and, despite appearances, is "very affectionate". This is false; the “creature” is just a replica of a prop known as the "face hugger" in the Alien movies and does not exist in real life.

“If you find this species of arthropod in your house do not kill it!!! His bite is not poisonous, they are very affectionate, it feeds on mice and small rodents, it goes away on its own,” reads the Facebook post published on September 6, 2022.

Two photos in the post show a strange, hybrid creature resembling a spider and a scorpion. 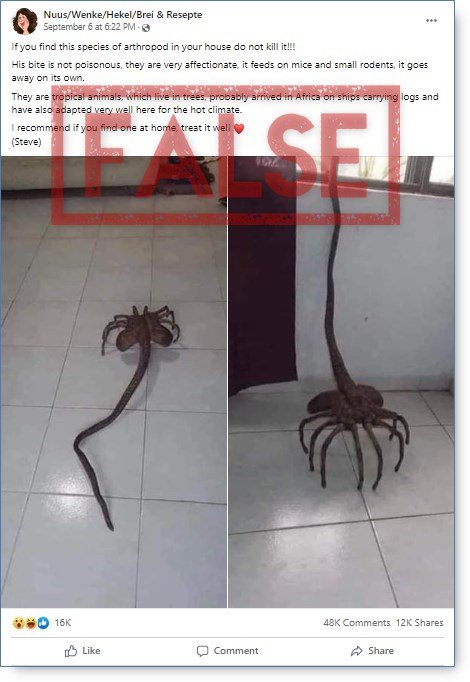 The post adds that the “arthropod” – invertebrates with exoskeletons and jointed limbs – likely made its way to Africa by way of “ships carrying logs” and then “adapted well” because of the hot climate.

The post was shared more than 12,000 times in an Afrikaans-language group dedicated to “News/Tips/Crochet/Knitting & Recipes” in South Africa.

AFP Fact Check first debunked the claim in Spanish last year. At the time, social media posts using the same photos claimed that the purported species of scorpion, described then as a “picajopo” or “picamutzul”, was in danger of extinction.

Spanish Google searches for the two names at the time did not provide results for any matching anthropods.

A search on the Integrated Taxonomic Information System (ITIS) was also unhelpful.

Scorpions are part of the arachnid arthropods family.

Diego Barrales Alcalá, an arachnid expert from the National Collection of Arachnids of the Institute of Biology at the National Autonomous University of Mexico (UNAM) and curator of the platform Naturalista, told AFP Fact Check in July 2021 that “there are no known arthropod species that are like this”.

A reverse image search of the alleged scorpion wrapped around a potted plant led to a Facebook page called “El Depredador Mérida”, belonging to a user who was a fan of dressing up in a costume from the science fiction movie franchise “Predator”.

A post on the page dated June 16, 2021, contained several photographs – including those currently circulating on social media – of the same scorpion-like creature alongside a Spanish caption that translates to: "My pet came back from outside, I think it was cold."

Contacted by AFP Fact Check on Facebook, Carter T. Russel, a collector of action figures of popular culture characters, identified himself as the author of the post and photographs.

Russel said the “pet” was actually a replica of the “face hugger”, an extraterrestrial creature that appears in the “Alien” movies, as seen in a screenshot here on the International Movie Database (IMDb). 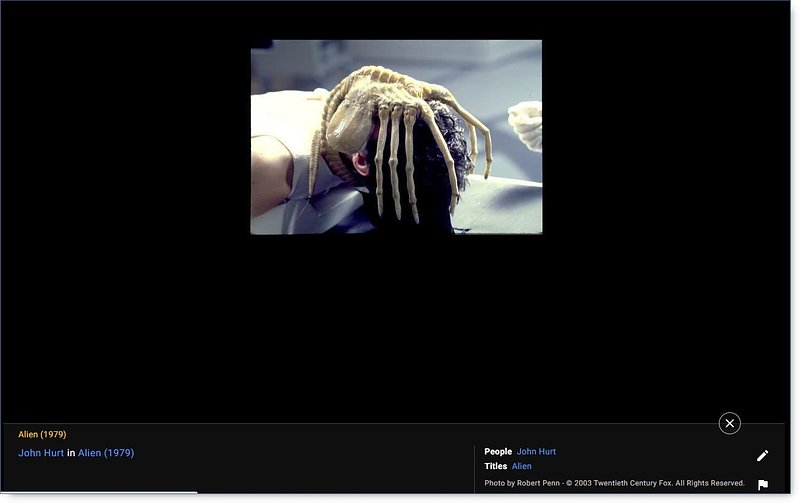 According to Russel, his version is a replica of a special model that was available at a convention he attended in 2005.

"Very few were made. It is made of latex with an internal metal structure so that it is flexible and can be placed in different positions," he said.

Russel can be seen in other photos on Facebook playing around with the same “face hugger” collectable.