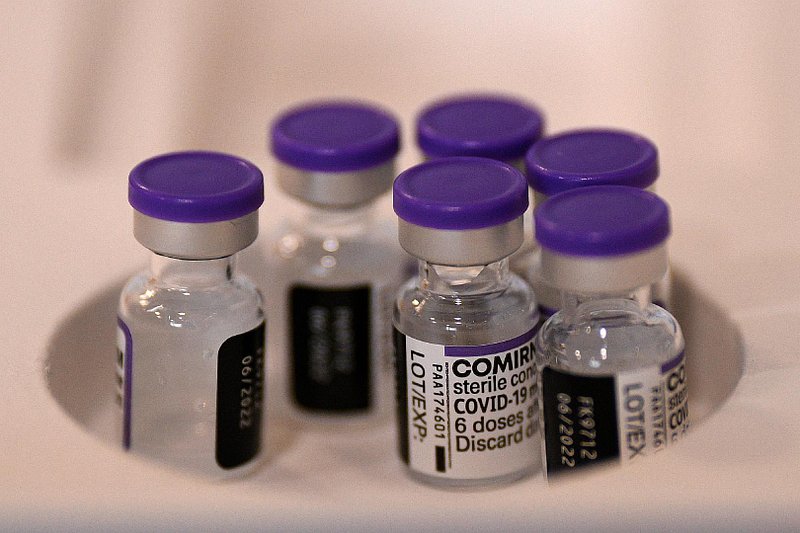 Social media posts shared thousands of times claim the UK government has scrapped Covid-19 vaccination for children aged five to 11 over concerns about side effects. This is incorrect; children are eligible for the jab if they have turned five before September 2022. Children who turn five on or after September 1 are only eligible if they are clinically vulnerable or are living with someone who is. Some scientists criticised the cutoff and pointed to the benefits of vaccinating children.

"BREAKING: Children in the UK aged 5-11 will no longer be offered COVID jabs," reads a tweet posted on September 8.

"The jab was also banned from children who had not turned five by the end of last month. This decision was due to concerns with developmental side effects in children. Wow."

The tweet was published by Simone Gold, a physician and founder of US-based group America's Frontline Doctors, which has repeatedly promoted misinformation about the Covid-19 pandemic. 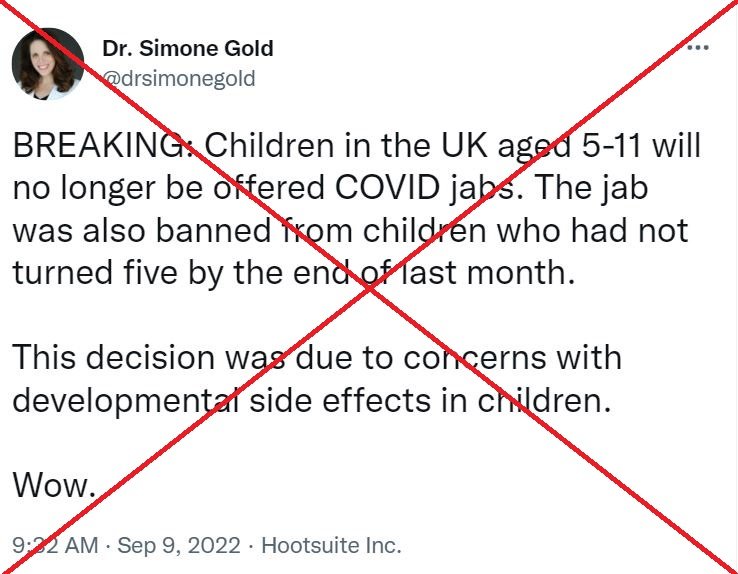 Screenshot of a tweet sharing the false claim, taken on September 19, 2022

The post garnered more than 17,000 retweets, with variations of it shared around the world, including in Australia, Canada and Mexico.

Some Twitter users (here and here) shared Gold's claim to criticise an announcement from New York State Governor Kathy Hochul that children aged 12 and over in the state would be eligible for a new, Omicron-specific booster shot.

However, the claim is false. The UK has not banned Covid-19 vaccination for children aged five to 11.

The UK opened up Covid-19 vaccination to all children aged five to 11 in February 2022, after initially limiting the jab to clinically vulnerable children.

Children in this age group are eligible for the jab if they turned five before September 1.

This means that the vast majority of children in the five-11 age group are eligible for Covid-19 vaccination.

However, children who turn five on or after September 1 can only get vaccinated if they are clinically vulnerable or are living with someone who is.

A representative for the UK Health Security Agency (UKHSA) insisted the government had not changed its policy.

"There has been no change to the offer of COVID-19 vaccinations for children aged 5-11 years," Gavin Dabrera, deputy director of Covid-19 vaccines and epidemiology at the UKHSA told AFP.

"In February 2022, the Joint Committee on Vaccination and Immunisation (JCVI) advised a one-off, non-urgent offer for children aged 5-11 years who were not in clinical risk groups. From the outset, this offer was only applicable to children who turned five years old by 31 August 2022."

The JCVI, which advises UK health departments on immunisation, said in February that the "one-off programme" applied to children celebrating their fifth birthday by the end of August.

"The intention of this offer is to increase the immunity of vaccinated individuals against severe COVID-19 in advance of a potential future wave of COVID-19," it said.

Health experts criticised the move to stop offering the jab to healthy children who turn five from September.

"Children turning 5, about to go to school, seem an excellent candidate for protection from vaccination if their parents choose to do so," Christina Pagel, director of University College London's Clinical Operational Research Unit tweeted.

"Why are we removing their choice? Especially with a significant winter wave expected?"

Stephen Griffin, a professor at the University of Leeds's School of Medicine, pointed to the benefits of vaccination for children.

"Covid in children can be serious," he told AFP. "Kids also develop long Covid, which is increasingly well recognised by many experts and policymakers."

"I am shocked that JCVI were not prescient enough to predict that Simone and her like might weaponise this decision."

Health authorities around the world have pointed out that the benefits of Covid-19 vaccination greatly outweigh the potential risks, including for children.

The UK drug regulator Medicines and Healthcare products Regulatory Agency (MHRA) said the Pfizer-BioNTech vaccine -- which is the one offered to children in the country -- was very effective.

Gold also falsely claims that the UK banned Covid-19 vaccination for children who had not turned five by the end of August.

The UK has not approved the jab for under-fives in the first place, as of September 22.

According to the National Health Service (NHS), children are eligible for the jab from the age of five.