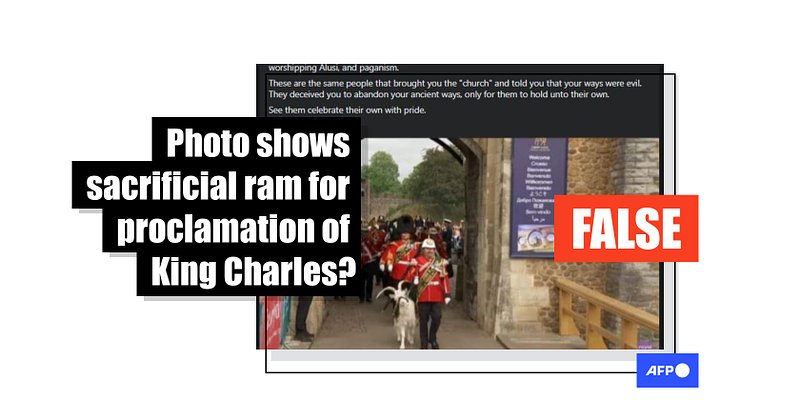 Facebook posts shared hundreds of times have claimed that a “ram” pictured marching with men in regimental regalia was sacrificed in a ritual to mark the crowning of King Charles III. This is false; the animal in the picture is a goat, not a ram, and was not part of any sacrifice. Named Shenkin IV, it is the mascot of the 3rd Battalion of The Royal Welsh infantry unit and took part in a parade to mark the king’s proclamation in Cardiff.

“This is the British carrying a white ram (intended for sacrifice) for the crowning and declaration of Prince Charles as King of England,” reads a post published on September 14, 2022, and shared more than 200 times. 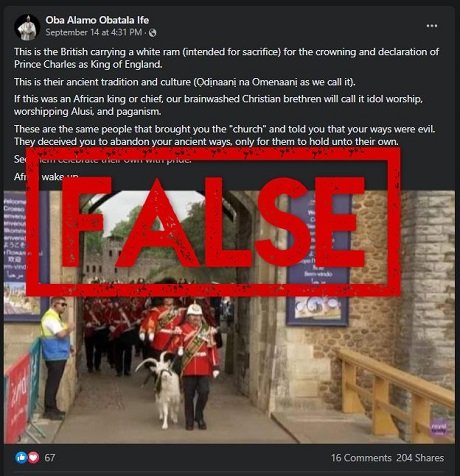 The post further claims that the purported sacrifice was a part of “their ancient tradition and culture,” and accuses the British of upholding a custom while frowning on Africans for doing the same.

The picture shows regimental officers dressed in ceremonial gear marching with the animal through an archway.

The Facebook account responsible for the post uses the name of Oba Femi Dada Oludayo-Akowe, a revered traditional worshipper in Ile-Ife in Osun state, southwest Nigeria. The account has a history of publishing posts that promote traditional African religions over Islam and Christianity.

The claims, however, are false.

AFP Fact Check conducted a reverse image search on the picture and found a video of a parade published by Yahoo News on September 11, 2022.

The video’s caption explains that it shows the 3rd Battalion of The Royal Welsh with their mascot, a goat called Shenkin IV, marching to Cardiff Castle shortly before Charles was proclaimed the king of Wales – a day after he was formally crowned. 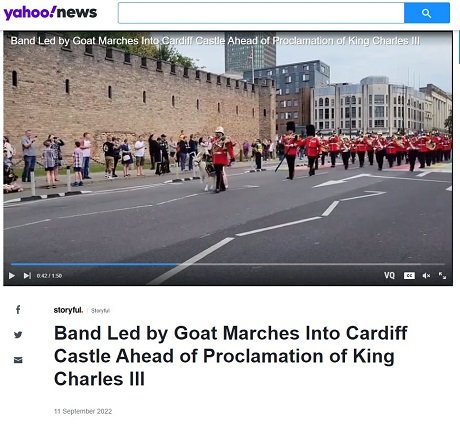 A screenshot of the video published on Yahoo! News, taken on September 20, 2022

Shenkin IV is a salary-earning lance corporal of The Royal Welsh and follows in the footsteps of other four-legged mascots before him. Leading the line with Shenkin IV is Major Sergeant Mark Jackson, according to a video tweeted by PA Media in the UK.

ITV News also reported the participation of Shenkin IV in the ceremony that preceded the proclamation of King Charles III in the capital city Cardiff. The news organisation’s online report included a video of the procession.

AFP Fact Check took a screenshot 36 seconds into the footage and matched the visuals to the image in the false posts. 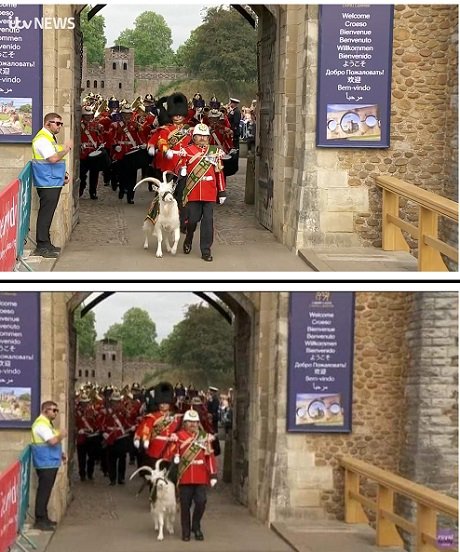 On September 16, 2022, the king and Camilla, Queen Consort, were pictured with the goat inside the grounds of Cardiff Castle.

An article published on the official website of the Royal Family said the royal pair visited Wales on September 16 as part of a “programme of visits across the regions”.

Shenkin IV, a Kashmir goat, was selected as the mascot of the 3rd Battalion of The Royal Welsh in March 2018 after Shenkin III’s death in September 2017.

NBC said Queen Elizabeth II, who died on September 8, 2022, gave the goat to the battalion.