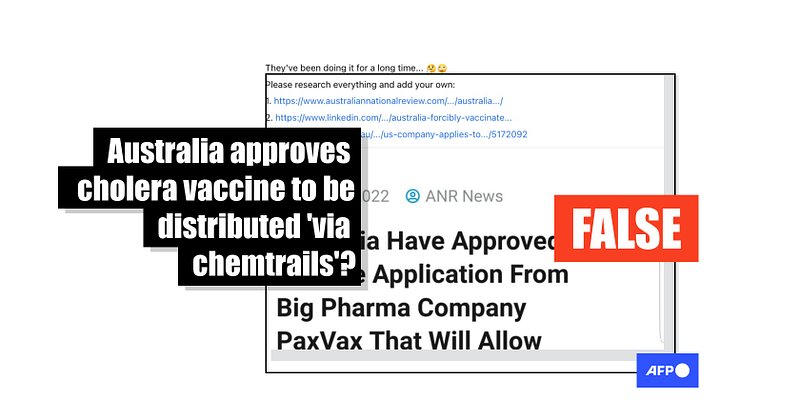 Social media and blog posts shared hundreds of times claim Australian authorities approved the release of a cholera vaccine "via chemtrails" over Queensland, the country's third most populous state. The claim, however, is false. A US-based health expert who was involved in the vaccine's development told AFP it is taken orally and there was "no scientifically plausible" reason to disperse it from the air. A representative for the vaccine's manufacturer said it has to be ingested to provide protection.

The claim was shared on Facebook here on September 13, 2022.

"They've been doing it for a long time… Please research everything and add your own," reads the post.

It links to an article on a website called the Australian National Review, a post on the social networking site LinkedIn, and an ABC News article.

Below these links is a screenshot of the article from the Australian National Review.

The article's headline reads "Australia Have Approved the License Application From Big Pharma Company PaxVax That Will Allow Them To Intentionally Release a GMO 'Vaxxine Consisting of Live Bacteria Into Queensland, via Chemtrails". 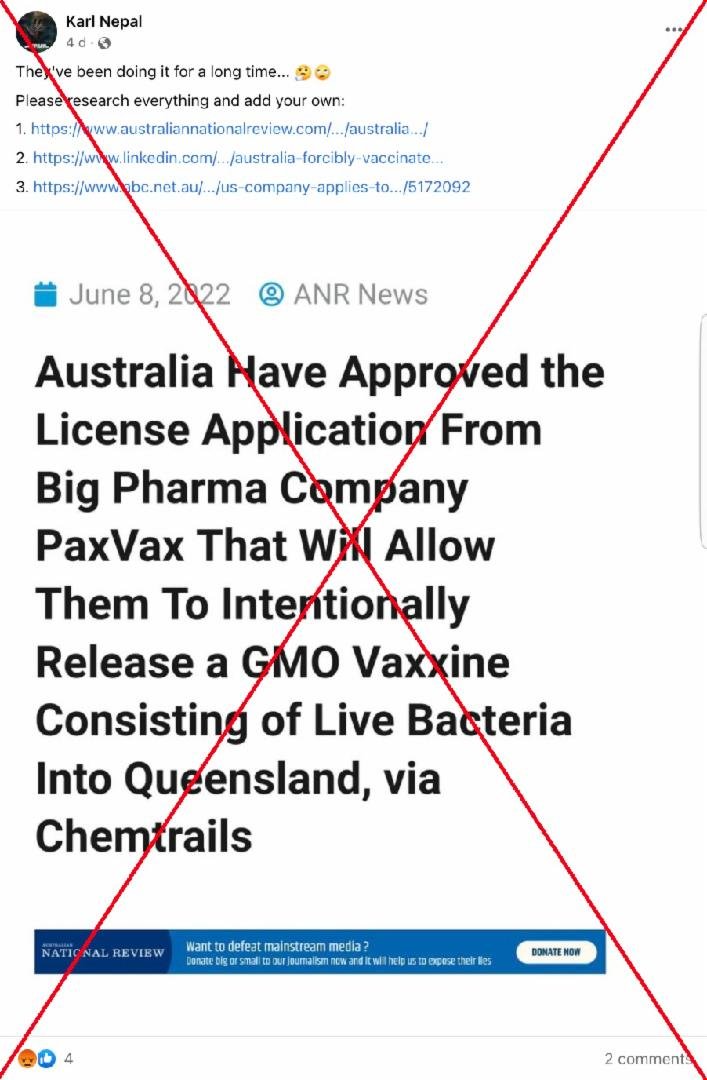 The claim has also circulated in blog posts published here and here in June 2022.

The posts reference the Vaxchora vaccine, made by US biotech company PaxVax. It protects against cholera in adults and children over two years old.

AFP has repeatedly debunked the chemtrail conspiracy theory, which baselessly claims that white streaks left behind by aircraft are spreading chemicals or viruses.

The streaks are actually condensation trails that are created by water vapour from an aircraft's engines.

The claim that Australia has approved the release of a vaccine over Queensland "via chemtrails" is false.

Wilbur Chen, an infectious disease physician and scientist who was involved in the development of the vaccine, told AFP it is taken orally.

A spokesperson for Emergent BioSolutions -- the parent company of PaxVax -- said the claim the vaccine would be released "via chemtrails" is false, and that the vaccine must be ingested to provide protection against cholera.

"Vaxchora was never sprayed from airplanes to forcibly vaccinate Australians or anyone else. That claim is false," the spokesperson told AFP.

The vaccine is not yet licensed in Australia, and the company is currently seeking approval from the Therapeutic Goods Administration, the country's drug regulator, the spokesperson said.

Vaxchora, which is a genetically modified vaccine, requires approval from the Australian Office of the Gene Technology Regulator (OGTR).

Between April 2014 and June 2015, it was authorised for use in a clinical trial and not released aerially, according to an OGTR webpage at the time.