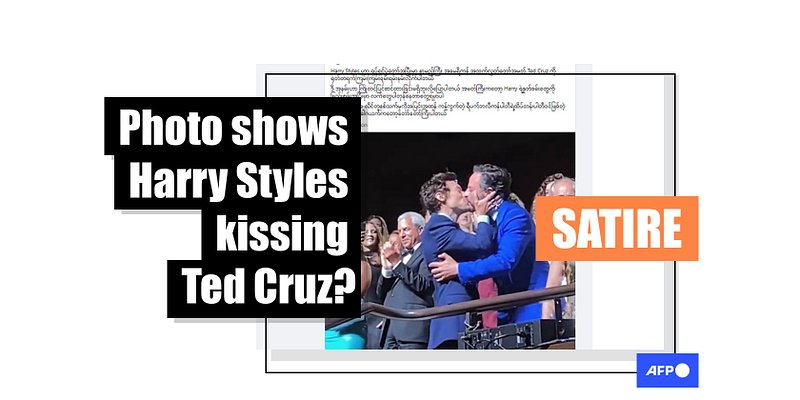 The claim circulated online after "Don't Worry Darling" -- a psychological thriller film that stars Styles – premiered at the Venice Film Festival on September 5, 2022.

The post's Burmese-language claim translates to English as: "Harry Styles kissed the republican senator Ted Cruz firmly on the lips after the end of the film festival. It was said that the kiss was not planned, and the senator was visibly shaking.

"Ted Cruz is a top republican party member who is against homosexuality, so this is pretty huge."

US Senator Cruz, a Republican from Texas, said on his podcast in July that he believed the US Supreme Court was "clearly wrong" in its landmark "Obergefell v. Hodges" ruling in 2015 that legalised same-sex marriage. 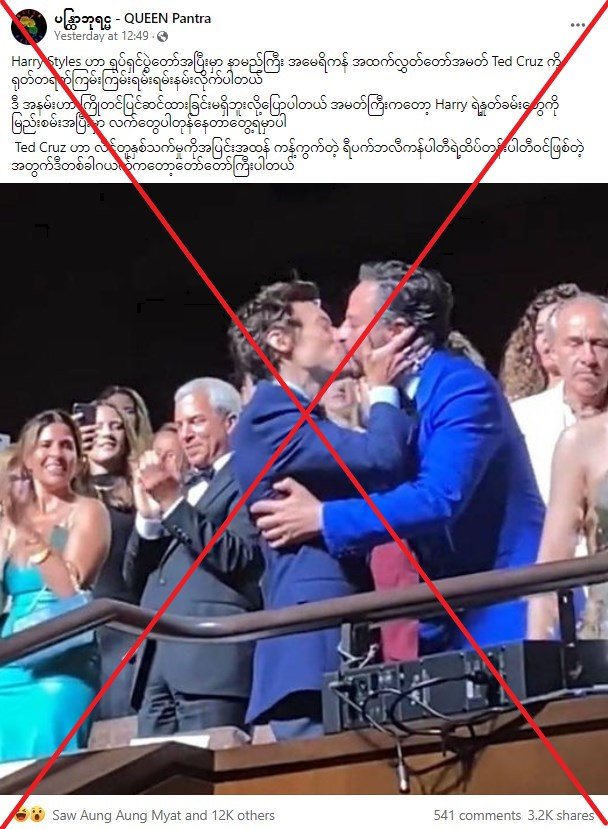 The same photo was shared alongside a similar claim on Facebook here, here and here.

Comments from some social media users suggested they were misled by the posts.

"But why is he kissing Harry back and holding him dearly? I mean it's a little gay for a homophobic," one user wrote.

The account carries the handle @BIBLEGIRL222 and the name "Pop Crave". It lists itself as a parody account in its bio description.

The tweet reads, "Harry Styles has allegedly been photographed kissing US senator, Ted Cruz (R), at a fundraiser for the national debt in Washington D.C. -- Fans are saying this is Styles' first official admission, without being on-screen as a gay cop, to being LGBTQIA+".

A combined reverse image search and keyword searches on Google found the corresponding photo published here on September 6, 2022, by the MailOnline, the website for Britain’s Daily Mail newspaper.

Nick Kroll is an American actor and comedian who played a supporting role in the film 'Don't Worry Darling' alongside Styles.

Below is a screenshot comparison between the photo seen in the misleading posts (left) and the photo published by the MailOnline (right):

Screenshot comparison between the photo seen in the misleading posts (left) and the photo published by the MailOnline (right).

The MailOnline also published a video, credited to the Twitter user @lostonlou, that shows the scene of Styles and Kroll kissing. The two actors can be seen kissing at the video's four seconds mark.

Footage of the kiss taken from a different angle was also published by Storyful news agency here on September 6, 2022.