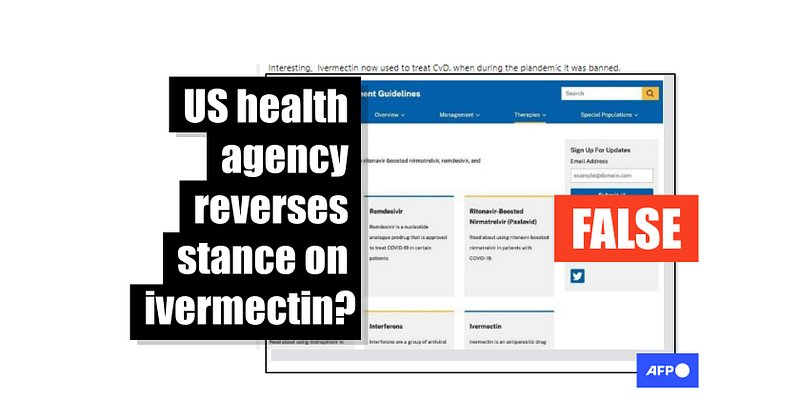 Facebook and Twitter posts have circulated worldwide falsely claiming the US National Institutes of Health (NIH) has modified its page in September to recommend the anti-parasite drug ivermectin for Covid-19. A spokesperson for the NIH told AFP on September 6 the agency "recommends against the use of ivermectin" for Covid-19. A review of the archives of the NIH website shows the agency has not recently altered its stance on the drug -- its last update on April 29, 2022 does not recommend ivermectin as a treatment for the coronavirus.

"Interesting, Ivermectin now used to treat [Covid-19]. when during the plandemic it was banned," reads a Facebook post published on September 4.

The post features a screenshot of a page from the NIH website -- titled "Antiviral Therapy" -- that shares available data on several antiviral medications in relation to Covid-19.

The section on ivermectin states: "Ivermectin is an antiparasitic drug that is being evaluated to treat Covid-19."

Similar posts on Facebook and Twitter claim the section was updated in September, criticising the NIH for supposedly reversing its stance on ivermectin.

Throughout the pandemic, AFP has repeatedly debunked posts touting ivermectin as an effective remedy for Covid-19, for example here, here and here. 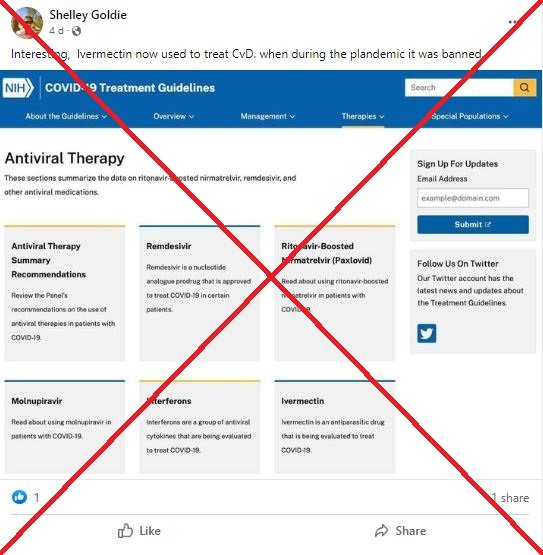 The false claim was also shared thousands of times in Portuguese, Spanish and French.

Responding to the posts, a spokesperson for the NIH told AFP on September 6: "The COVID-19 Treatment Guidelines panel recommends against the use of ivermectin for the treatment of COVID-19."

A separate section on the same NIH page in fact states the list under "Antiviral Therapy" includes medications that are being evaluated in clinical trials.

"The inclusion of these drugs does not imply that the Panel recommends their use," the section reads.

The NIH's most recent information on ivermectin -- updated on April 29, 2022 -- states the agency "recommends against the use of ivermectin for the treatment of Covid-19, except in clinical trials."

The agency said its recommendation is based on recently published randomised controlled trials that showed ivermectin had "no clinical benefit" for the treatment of Covid-19.

The earliest available archive of the NIH's "Antiviral Therapy" page on Wayback Machine -- taken in June 2021 -- shows the same message about ivermectin.

The advice has not been modified to recommend ivermectin for Covid-19 in September.

Below is a comparison between the June 2021 archived version of the page (left) and the published version in September 2022 (right):

In December 2021, the US Food and Drug Administration warned against using ivermectin for treating Covid-19.

Its statement reads in part: "Even the levels of ivermectin for approved human uses can interact with other medications, like blood-thinners.

"You can also overdose on ivermectin, which can cause nausea, vomiting, diarrhea, hypotension (low blood pressure), allergic reactions (itching and hives), dizziness, ataxia (problems with balance), seizures, coma and even death."

The World Health Organization and the European Medicines Agency have also separately advised against the use of ivermectin to treat Covid-19, except in clinical trials.