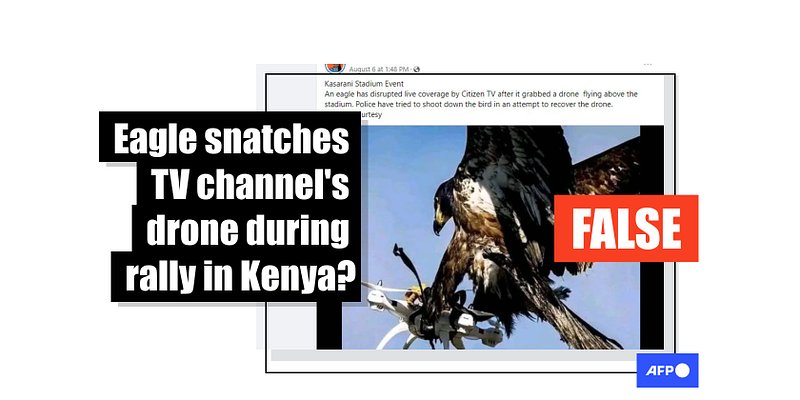 An image of an eagle clutching a drone in midair has been shared thousands of times on multiple Facebook posts alongside the claim that the scene was captured at the final presidential campaign rally of veteran Kenyan politician Raila Odinga on August 6. According to the claim, the eagle’s actions interrupted live television coverage and ended with police shooting the raptor. But the claim is false; the image, while genuine, was taken during a police training exercise in the Netherlands in March 2016. Additionally, a television director covering the event told AFP Fact Check that the station did not have any drones at the rally, contrary to what was claimed in the posts.

On August 6, a Facebook page called “Kenya Max News”, which has more than 80,000 followers, shared an image of an eagle grabbing a drone in mid-flight.

"Kasarani Stadium Event: An eagle has disrupted live coverage by Citizen TV after it grabbed a drone flying above the stadium. Police have tried to shoot down the bird in an attempt to recover the drone," reads the post, shared more than 3,000 times. 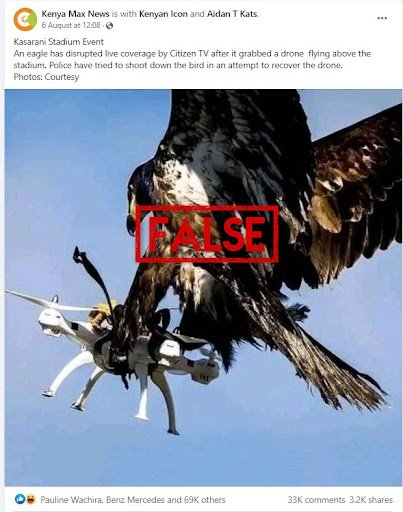 Kasarani stadium is where Odinga held his final campaign rally ahead of today’s presidential elections.

The page has since been deleted.

Both claims are false.

A reverse image search shows that the image was published by Algemeen Nederlands Persbureau (ANP), a Dutch news agency, on March 7, 2016.

On the same day, AFP distributed the image and captioned it: “An eagle of the Guard from Above company, grasps a drone during a police exercise in Katwijk, on March 7, 2016. The bird of prey can get drones from the air by catching them with his legs."

A screenshot of the eagle-drone picture on the AFP website, taken on August 9, 2022

Guard From Above is a company based in The Hague that specialises in training birds of prey to intercept enemy drones.

Additionally, Citizen TV director Kevin Kamau, who covered Odinga’s rally in Kasarani, dismissed the claim, noting that the station “did not have any drones” in use during the coverage.

“There’s nothing like that has happened. I just read about it on the internet,” Kamau said.

He added that the station did not experience any broadcast interruptions and received an uninterrupted drone feed from the event organisers.