The post's caption reads in part: "‘Monkeypox’ Is Only Circulating In Countries Where Pfizer Vaccine Has Been Distributed. Think about that for a moment."

The top map includes the WHO's logo and purports to show countries that have reported monkeypox cases since May 2022.

It also highlights several countries in Africa with a red circle, saying monkeypox has been "endemic" in those states for more than 50 years.

The bottom map purports to show countries where the Pfizer-BioNTech Covid-19 vaccine has been approved for use.

The maps were taken from this June 24 article on The Daily Expose website, which has previously published inaccurateclaims debunked by AFP. 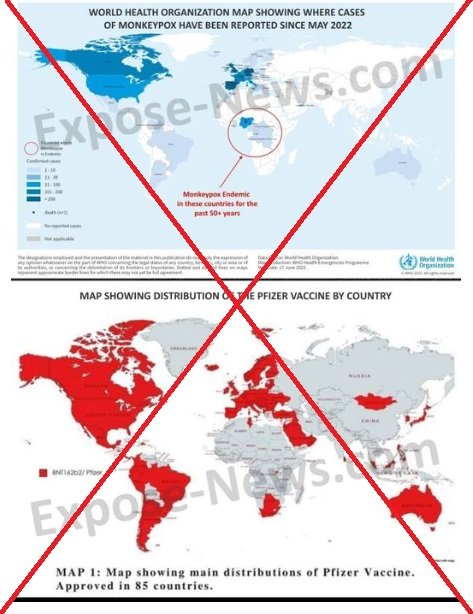 Monkeypox, so called because it was first discovered in a monkey, is related to the deadly smallpox virus, which was eradicated in 1980, but is far less severe.

Early signs of the disease include a high fever, swollen lymph glands, and a chickenpox-like rash.

In May 2022, a flurry of cases was detected in countries outside Africa in people with no travel links to the region, AFP reported.

The WHO last month declared the outbreak to be a global health emergency -- the highest alarm it can sound.

Posts containing a similar claim about the origins of monkeypox were shared hundreds of times in Australia, the US, and Japan.

But medical experts told AFP the claim that monkeypox outbreaks are linked to Pfizer-BioNTech's Covid vaccine is false.

According to the WHO, although monkeypox is not highly contagious, it can be "transmitted from one person to another by close contact with lesions, body fluids, respiratory droplets and contaminated materials such as bedding."

Jaya Dantas, professor of international health at Australia's Curtin University, said she had found no correlation between recent monkeypox outbreaks and the countries where the Pfizer-BioNTech vaccine has been administered.

"The Pfizer vaccine has been administered in 180 countries and most of these do not have any cases of monkeypox," Dantas told AFP.

Peter Collignon, a professor from the Australian National University Medical School, told AFP that monkeypox existed for decades before Covid-19 vaccines were created.

"Monkeypox has been known for decades, long before Covid-19 vaccines have been developed," Collignon said.

He went on to say that some mRNA vaccines -- such as the one developed by Pfizer-BioNTech -- have "side effects but serious ones are relatively uncommon".

The claim that the WHO has not received reports of monkeypox cases from countries not using the Pfizer-BioNTech vaccine is also false.

Some countries -- including India, Russia and Venezuela -- have reported at least one case of monkeypox as of August 9 but their respective health authorities do not administer Pfizer-BioNTech's vaccine to the public.

A Pfizer spokesperson told AFP that governments and experts around the world have continually reviewed the vaccine's data to ensure it is safe. "The safety profile for the vaccine for all authorised groups continues to be favourable," the spokesperson said.

The WHO also told AFP that the map that purports to show the spread of monkeypox around the world had been altered.

"The red writing and circle have been added. Also, the heading in bold is not ours," a WHO spokesperson said.

A search on the WHO website found the altered map was taken from a situation report published on June 27, 2022.

Below is a comparison of the altered map (left) and the original map published by the WHO (right):

The spokesperson went on to say the claim that "health authorities are scrambling to cover up the damage of injecting millions of people with an experimental mRNA injection" is false.

The other map in the false posts that purports to show the distribution of the Pfizer-BioNTech vaccine is outdated.

It was published as part of an article in the Postgraduate Medical Journal first published in August 2021 showing the distribution of Pfizer vaccines as of May 16, 2021

The first human case of monkeypox was reported in the Democratic Republic of the Congo in 1970.

Collignon said mutations and increasing levels of international travel after the lifting of Covid-related restrictions have contributed to recent outbreaks outside of Africa.

"Monkeypox spreads through skin-to-skin contact, that's why it's spreading," he said.

The WHO wrote in its latest update in June that the wide geographic spread of cases indicates that the monkeypox virus "might have been circulating below levels detectable by the surveillance systems and sustained human-to-human transmission might have been undetected for a period of time".