Kenyan men have been taking to social media to tell stories of how they were stood up by women after arranging dates and sending them money for transport. At the end of July 2022, social media posts and news blogs began spreading a claim about a Kenyan woman ordered to pay her boyfriend damages after she spent money he had sent to her in order to attend his birthday party. The claim, however, is false; Kenya’s judicial service said there was no record of the purported case. An unrelated image in the posts showing a woman being guarded in court was taken back in 2018.

“A Nairobi lady has been ordered by the Milimani Small Claims Court to her boyfriend Kshs 23,750 ($200) after he sent her Kshs 3,000 ($25) to pay for a taxi to attend the man’s birthday party but the lady did not show up and instead switched off her phone,” reads the captions on two Facebook posts published on July 28, 2022 (here and here).

The posts include an image showing three women – two wearing military-style uniforms – standing in what appears to be a courtroom dock. The third woman in the picture is wearing ordinary civilian clothing. 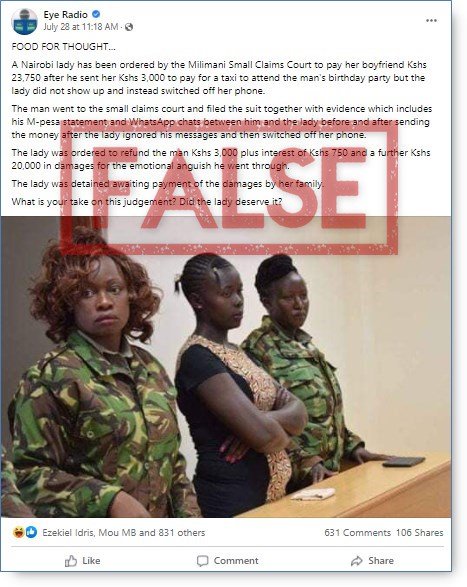 According to other details in the posts, the unnamed man was awarded damages for the “emotional anguish he went through”, while the woman was purportedly detained until her family was able to come up with the money. 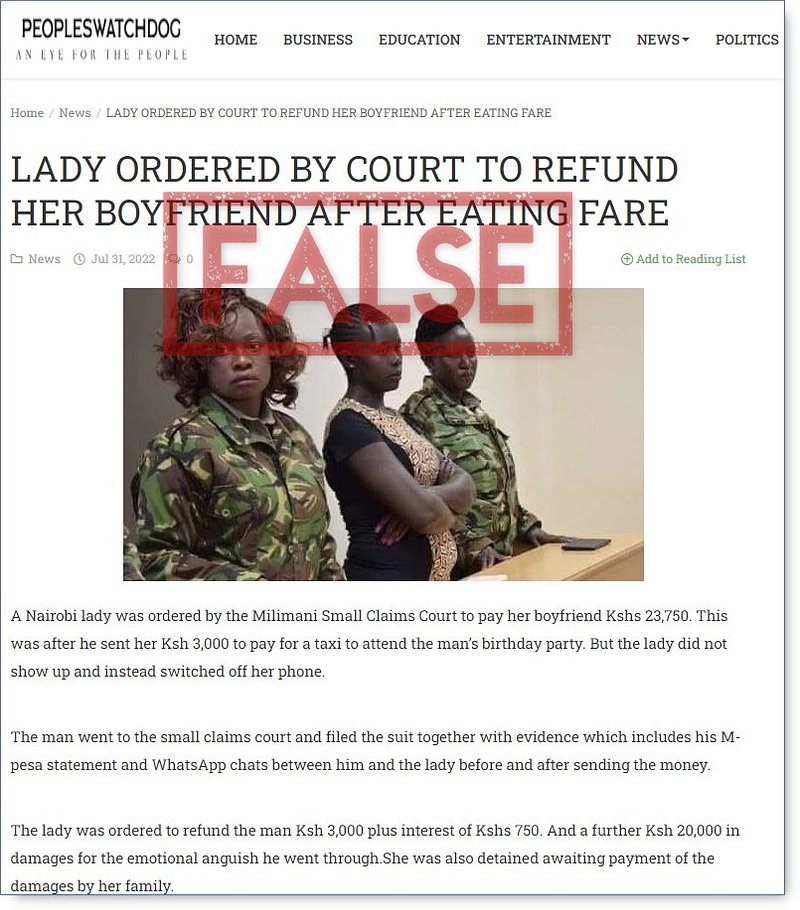 A screenshot of one of the false reports, taken on August 1, 2022

Kenyan men have peppered online discussions (here and here) with similar tales of woe, complaining about women they had arranged dates with who simply vanished after being sent money for transport.

Locally, this is referred to as “kula (eat) fare (busfare)”.

The Directorate of Criminal Investigations (DCI) in Kenya even warned women last year “to be wary of predators whose bond of love is premised on monetary cords that are meant to temporarily win their affection”.

However, the claim about the purported lawsuit is false.

Kenya’s Department of Justice tweeted a screenshot of the claim on July 28, 2022, and labelled it “fake news”.

Additionally, a spokeswoman for Kenya’s judiciary told AFP Fact Check that according to the Small Claims Court Registrar, “none of the adjudicators confirms having handled such a case”.

A reverse image search also found that the photo of the three women being used in the posts was published in an article on May 23, 2018, about a Kenyan woman – seen in the centre of the picture – who was sentenced to 15 years in prison by a Kisumu court for having sex with a minor.

Earlier this year AFP Fact Check debunked a similar false claim about a Kenyan woman who appeared in court for stealing cooking oil from her boyfriend.