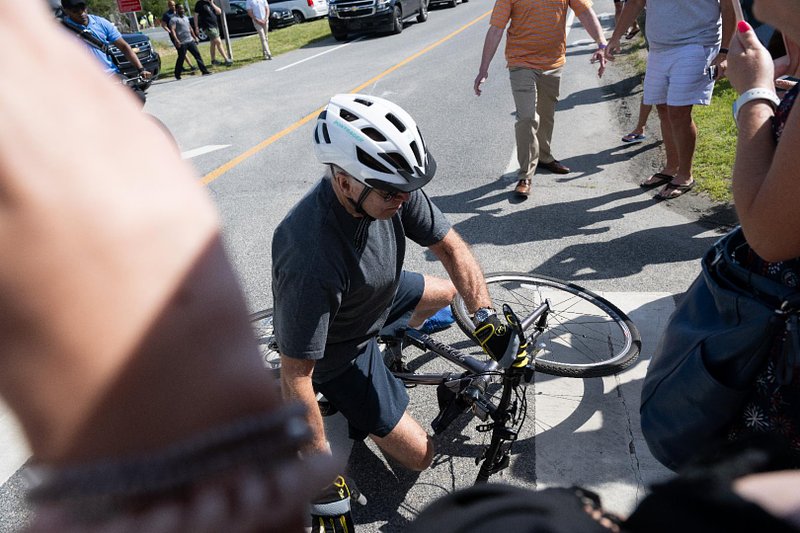 A supposed article from The Atlantic, shared thousands of times as an image on social media, describes US President Joe Biden falling off his bike as "heroism." But the image is fabricated; the magazine did not publish such an article or headline, which appears to stem from a political satire website.

"OMG," said Kelli Ward, chair of Arizona's Republican Party, in a June 18, 2022 tweet with an image of what appears to be a headline published by The Atlantic, a US magazine. 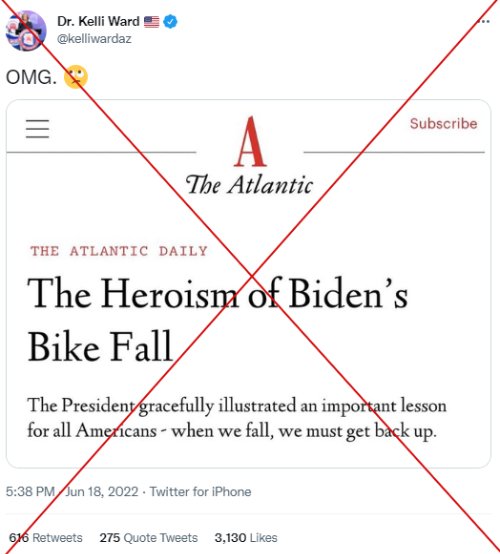 On June 18, Biden took a tumble while cycling near his beach home in Delaware, but he was unhurt. A video from a White House pool report showed the 79-year-old getting up immediately after his fall and saying: "I'm good."

While Biden's fall is real, the purported Atlantic article is not.

A search on the magazine's website did not lead to any articles that match what is displayed in the social media posts.

"I can verify that this is not a real article from The Atlantic, and is indeed fabricated," Anna Bross, a spokeswoman for the publication told AFP.

Bross said The Atlantic commented on the fake article in a newsletter published June 21.

"P.S.: If you've seen an Atlantic headline about 'the heroism of Biden's bike fall' circulating on social media, it's not real. It seems to be a parody," the newsletter says.

Using CrowdTangle, a social media insights tool, AFP found that the earliest example of the fabricated article appears to be a now-deleted Instagram post from Flappr. AFP contacted the political satire site for comment but did not receive a response by the time of publication. 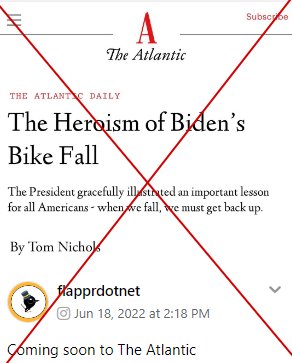 "I spent two years with Joe Biden on the campaign trail and saw how his message of empathy resonated with voters," Simonson said in a tweet. "When he fell off his bike on Saturday, millions of children were reminded why it was so important that he won the 2020 election. My latest for The Atlantic."

Biden's fall, which was caught on camera by multiple people, generated a wave of comedic responses on social media. Former US president Donald Trump shared a video montage on his social media platform Truth Social that shows Trump knocking Biden off his bike by hitting him with a golf ball.

As the oldest US president, Biden's health has long been the subject of scrutiny and speculation. AFP has previously debunked manipulated media involving the president here and here.