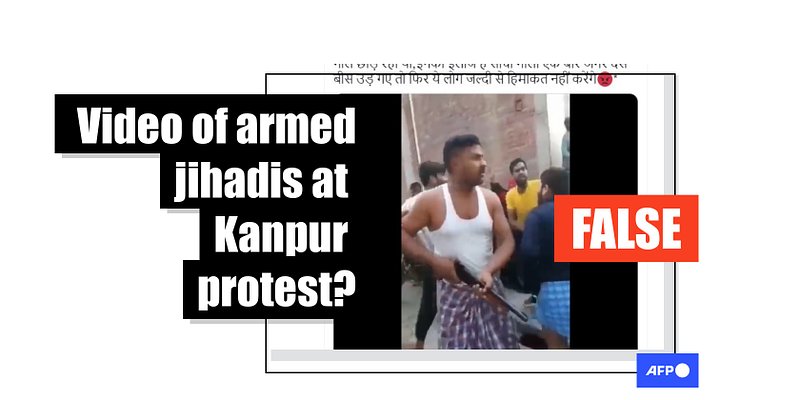 Following nationwide protests in India over a ruling party official's comments about the Prophet Mohammed, a video was viewed thousands of times in social media posts that claim it shows Muslims at one protest waving guns and firing indiscriminately. There were reports about violence at some protests, but this video has circulated since 2021 in local news reports about a dispute over the sale of meat in Uttar Pradesh state.

"These are the jihadis of Kanpur who were openly firing indiscriminately with state-of-the-art weapons and police were only using tear gas shells," reads in part a Hindi-language tweet posted on June 10, 2022.

"They should be shot. When 10, 20 people die, then they will not have the courage to do this again."

A video attached to the tweet, viewed more than 3,500 times, shows two men clutching what appear to be guns as a group of people scuffle nearby. 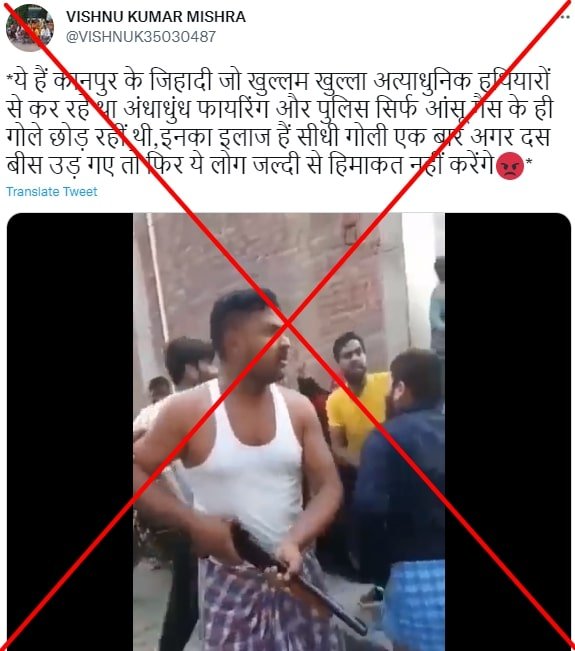 Kanpur -- a city in the northern Indian state of Uttar Pradesh -- saw violent clashes during street protests over remarks by a ruling party official about the Prophet Mohammed.

The comments by the Bharatiya Janata Party's Nupur Sharma sparked huge protests elsewhere in India as well as in neighbouring countries. Sharma was suspended by the party for her remarks.

The Hindustan Times newspaper reported that officials said protesters in Kanpur had "pelted stones, fired shots and lobbed petrol bombs at police who in return used batons to disperse the mob".

Around 50 people were arrested in connection with the violence in Kanpur, the newspaper reported.

The video was also posted with a similar claim elsewhere on Twitter here and here; and on Facebook here and here.

However, the claim is false; the video has circulated since 2021 in local news reports.

The post's Hindi-language caption translates in part as: "Dispute between two parties over the purchase of meat, during the quarrel, guns were taken out by one side."

Below is a screenshot comparison of the video in the false tweet (left) and the video posted on Facebook in 2021 (right):

A subsequent keyword search led to this report from  May 12, 2021 by the Hindi-language Amar Ujala newspaper.

A screenshot from the video is used in the report.

The report's headline reads: "Bareilly: Clashes between two sides of the same community in Dhauratanda, firing."

Bareilly is a city in Uttar Pradesh state, around 230 kilometres (140 miles) from Kanpur.

According to the report, the video shows a clash between a tenant and landlord in Dhauratanda, Bareilly on May 9, 2021.

It says the families of both parties pointed guns at each other and shots were fired, but no injuries were reported.

The incident was also covered by other local media here and here.

A senior superintendent of the Bareilly police, Rohit Singh Sajwan, told AFP the video was unrelated to the recent protests in Kanpur.

"Some anti-social elements are sharing this one-year-old video with communal and false claims," he said.

"Police will take action against them with appropriate sections. The claim made with the video is false, please refrain from spreading rumours."