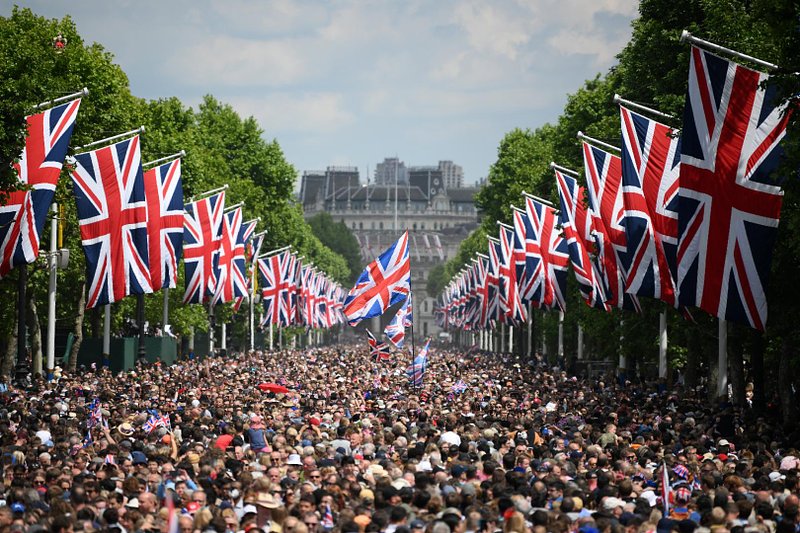 Facebook posts circulating in Thailand claim a video viewed tens of thousands of times shows anti-government protesters disrupting a parade in Britain for Queen Elizabeth II's Platinum Jubilee. The posts make a comparison with Thailand's anti-government protests, which broke out in the conservative kingdom in 2020. However, a climate change pressure group linked to the environmental movement Extinction Rebellion told AFP the footage shows its activists promoting a campaign for plant-based farming.

The three-finger salute was a symbol of resistance that became popular during anti-government protests in Thailand that first gained momentum in July 2020.

At its peak, the movement drew tens of thousands to street rallies, demanding the resignation of Prime Minister Prayut Chan-O-Cha, a former army chief who first came to power in a 2014 coup.

"This footage was filmed in England, which proves that being too liberal is not accepted universally. Poor them #BBC please report on this."

The video shows members of the Queen's Guard marching band on The Mall near Buckingham Palace in London.

Several people can be seen jumping into the band's path before they are dragged away by police. 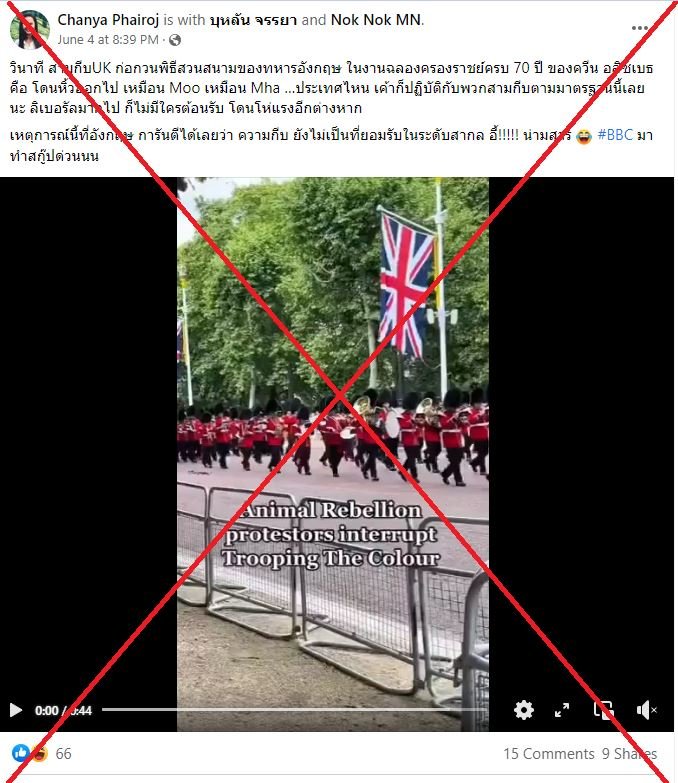 Queen Elizabeth II celebrated 70 years on the throne in June, with four days of festivities for Britain's longest-reigning monarch including a Trooping the Colour military parade and a star-studded concert.

The video was viewed more than 21,000 times in similar Facebook posts here, here, here and here.

"Are they following the three-fingered saluters in Thailand?" one comment read.

One user wrote: "They should be doing this in Thailand."

A keyword search found footage of the same protest in a June 2 report by British newspaper The Guardian about activists from Animal Rebellion, a pressure group linked to Extinction Rebellion.

The footage -- which was filmed from the opposite side of The Mall to the video in the misleading posts -- shows the same man in yellow taking part in the parade and the same activist dressed in green running out into the procession.

Below is a screenshot comparison of the video shared in misleading posts (left) and the Guardian's video (right) with similarities circled in red:

Screenshot comparison of the video shared in misleading posts (L) and the Guardian&#039;s video (R) with similarities circled.

A representative for Animal Rebellion told AFP that the footage shows its members.

"The protest was to draw attention to our dairy campaign where we demand the government supports dairy farmers in transition to sustainable plant-based farming," the spokesperson said.

The group says on its website that it works to promote climate and animal rights issues.

"Animal Rebellion is a mass movement that uses nonviolent civil disobedience to bring about a transition to a just and sustainable plant-based food system, to halt mass extinction, alleviate the worst effects of climate breakdown and ensure justice for animals," it says.

Animal Rebellion also tweeted about the protest on June 3.

Yesterday, Animal Rebels disrupted the Queen’s Platinum Jubilee celebrations to demand we Reclaim Royal Land as part of a broader wildlife restoration and carbon drawdown plan for a Plant-Based Future.

Join our talk tonight to find out how you can get involved.

The protest was covered by various British media outlets, including here and here, which reported that the activists were campaigning for the UK to transition to a plant-based farming system.