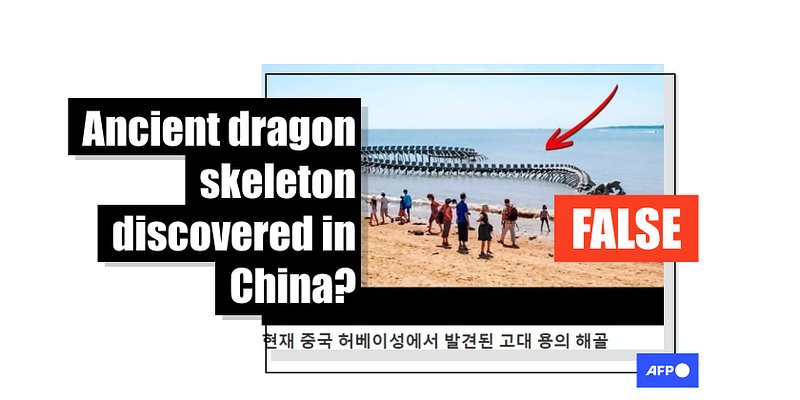 An image of what appears to be the skeleton of a large serpent-like creature has been shared repeatedly in Korean-language online posts that claim it shows the remains of a dragon discovered in China. This is false: the image shows a sculpture of a sea serpent on display at a beach in the Atlantic coast of France.

The image was shared here on Amvez.com, a South Korean tabloid news website, on June 9. 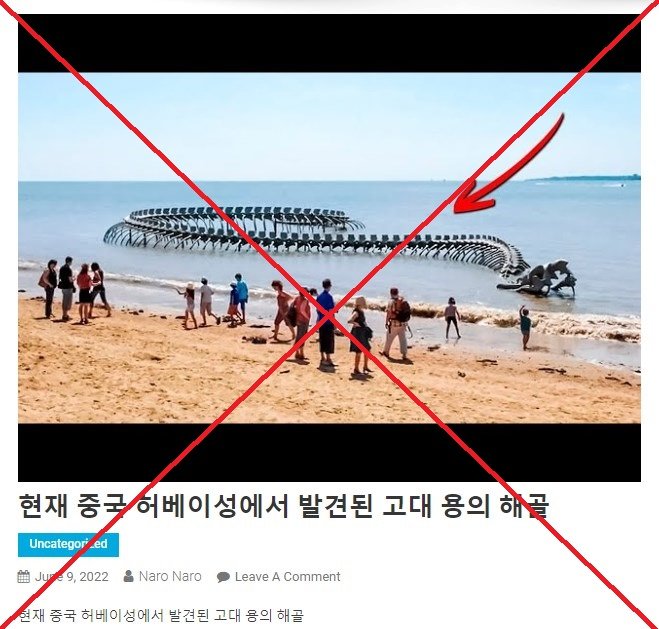 Screenshot of the misleading claim shared on Facebook, captured June 10, 2022.

The identical image was also shared with a similar claim on Facebook here, here, here and here.

A reverse image search on Google found the identical image published on July 26, 2013 in a report by Zeit Online, the online edition of the German weekly newspaper Die Zeit.

The installation was displayed on the estuary of the Loire River, which connects the French city of Nantes to the Atlantic Ocean, according to the German-language report.

Below is a screenshot comparison of the image shared in one of the false posts (left) and the image published by Zeit Online (right):

Screenshot comparison of the image shared alongside the false claim in the social media posts (left) and the original photo published by Zeit Online (right).

The Nantes tourism office's website has published several photos and a video of the artwork, which was partially funded by the European Regional Development Fund.

Serpent d'océan is part of Estuaire, a series of 33 contemporary works of art in Nantes, Saint-Nazaire and on the banks of the Loire Estuary that are freely accessible to the public, according to the collection's official website.

A satellite image of the structure can be seen on Google Maps at the address indicated on the Nantes tourism website.

A different satellite image of the sculpture can also be seen here on Google Earth.

The artwork was also referenced on various tourism websites and news reports.

Huang was an avant-garde artist born in China in 1954. He worked in France since 1989 until his death in 2019, according to the gallery Tang Contemporary Art.

In addition to Serpent d'océan, Huang created several other pieces featuring serpent-like skeletons, which can be seen here, here and here.