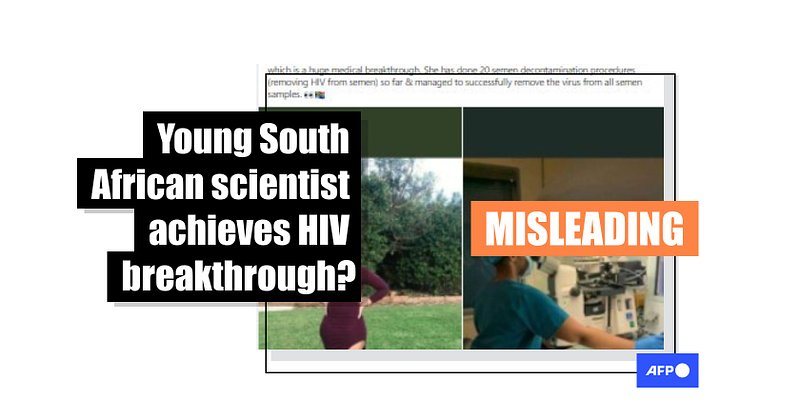 Widely-shared social media posts claim that a young South African scientist recently made a medical breakthrough by successfully removing HIV from numerous semen samples. However, the claims are misleading, as was pointed out by the intern herself, whose tweets about learning the procedure were taken out of context. The process she referred to has been successfully performed for decades and is a common technique in reproductive biology.

One Facebook post published on May 28, 2022, includes a picture of a woman posing in a maroon dress. Another image alongside presumably shows the same person inside a laboratory wearing medical scrubs and looking through a microscope.

“Meet Lebo Moatshe from South Africa who successfully removed HIV from a sperm cell in a lab which is a huge medical breakthrough. She has done 20 semen decontamination procedures (removing HIV from semen) so far & managed to successfully remove the virus from all semen samples.” the post’s caption reads. 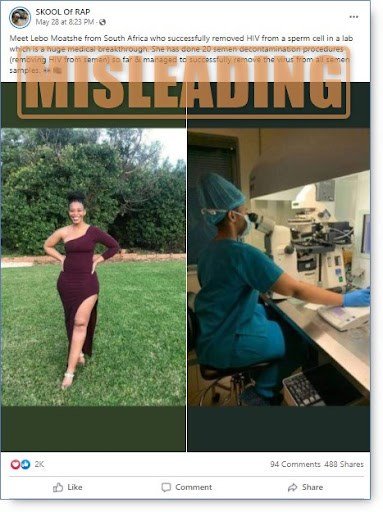 A screenshot of the misleading post, taken on June 1, 2022

Other similar posts also include pictures of microscopic samples.

The posts emerged a few days after South African medical science intern Lebogang Moatshe tweeted on May 26, 2022, about her personal success while training as an embryologist.

“I’ve done 20 semen decontamination procedures (removing HIV from semen) so far and I managed to successfully remove the virus from all semen samples ,” read her tweet.

A screenshot of the embryologist’s Twitter thread, taken on June 1, 2022

Social media users celebrated her success, but in doing so implied she was the first person ever to successfully carry out the procedure. 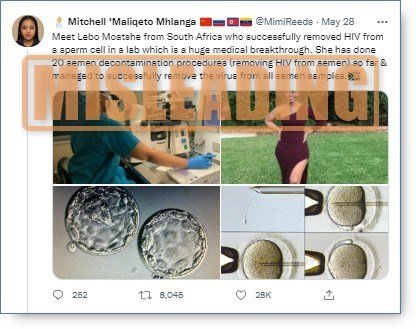 A screenshot of a misleading tweet, taken on June 1, 2022

Moatshe clarified that what she had done is common in the field of reproductive biology.

Hi Mimi. Thank you for sharing, however, I must clarify that I’m not the first person to do this procedure. It has been done by many over a period of years. It is a common thing in reproductive biology. I have just acquired the skill recently as an intern hence my post.

Moatshe was referring to a procedure known as “semen washing”, which involves the removal of HIV from an infected man’s sperm prior to insemination.

Studies using this procedure date back to 1989.

It allows couples in a serodiscordant relationship — where one partner is HIV positive — to have children with reduced risk of their offspring contracting the virus.

Research published in 2015 suggested that “semen washing prevents HIV transmission in HIV-discordant couples attempting pregnancy where the man is infected”.