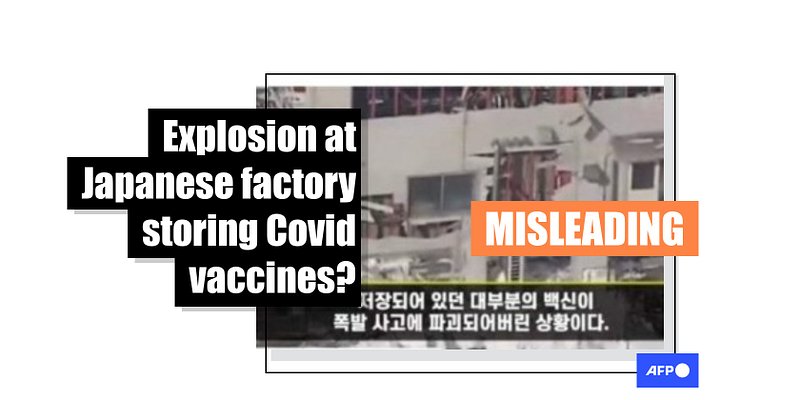 An image of a damaged building has been shared repeatedly in Korean-language social media posts that claim it shows the aftermath of an explosion at "a factory storing Covid-19 vaccines" in Japan. This is misleading: the image corresponds to multiple news reports about an explosion at a Japanese factory that handles raw materials for semiconductors. A spokesperson for the factory told AFP it does not produce or store vaccines. 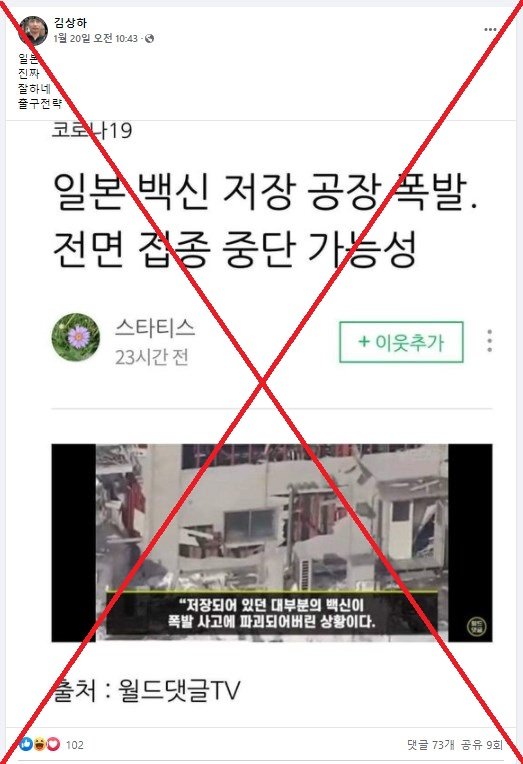 The post shows a Korean-language blog containing the image.

The blog's headline translates as: "A factory storing Covid-19 vaccines exploded in Japan. Possible [there will be a] complete halt to vaccinations.

"Most of the vaccines stored [in the building] were destroyed by the explosion."

The post's caption translates as: "Japan is doing really well with its [pandemic] exit strategy."

The image was also shared alongside a similar claim on Facebook here, here, here and here; and on YouTube here.

There have been no official reports about a recent explosion at a vaccine storage facility or factory in Japan.

The Japanese government plans to continue offering free Covid-19 vaccines until at least September 2022, according to its health ministry.

In reality, the image corresponds to news footage of an explosion at a Japanese factory for semiconductor materials.

A reverse image search on Google found similar footage of the same building posted on YouTube on January 6, 2022 by KHB, a Japanese news broadcaster based in Japan's Miyagi Prefecture.

The video's Japanese-language description translates as: "On the morning of the 6th, two men were taken to a hospital after an explosion at a factory in Sanbongi, Osaki City, Miyagi Prefecture, which manufactures raw materials for semiconductors."

Below is a screenshot comparison of the image shared on Facebook (left) and the KHB footage (right):

Japanese news organisations Kyodo News and The Sankei News also reported on the explosion. There were no references to Covid-19 vaccines in the reports.

The Kyodo report identifies the factory as owned by the Japanese company RASA Industries.

On the company's website here, it lists deodorising chemicals; industrial machinery; and electronic materials among its products.

"We do not produce Covid-19 vaccines nor store them," a spokesperson for RASA Industries told AFP.