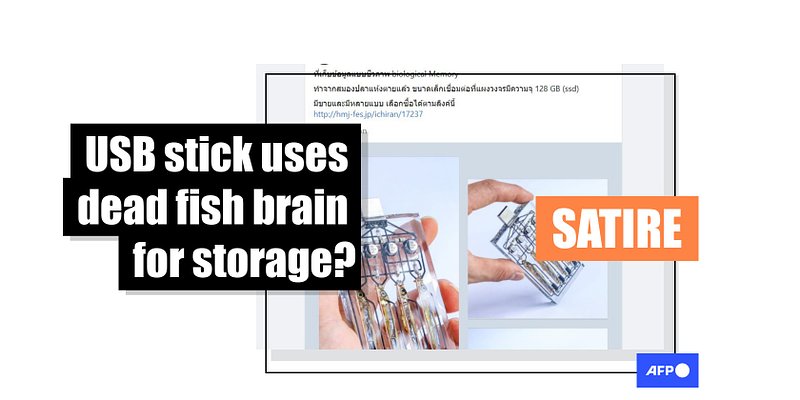 Social media posts circulating in Thailand have shared photos of USB sticks that appear to contain fish inside them with a claim that these are biological devices "using brains of dead fish" for storage. Some social media users appeared to believe the storage technology is genuine. In reality, the creator of the USB sticks told AFP the images show goods that were created as a "joke". No such storage technology currently exists, multiple scientists told AFP.

Three photos of transparent USB devices containing what looks like dried fish were posted here on Facebook on January 10.

The Thai-language post translates as: "Biological data storage (biological Memory) made from the brain of a dead dried fish / small in size and connected to a circuit board with a capacity of 128 gigabytes." 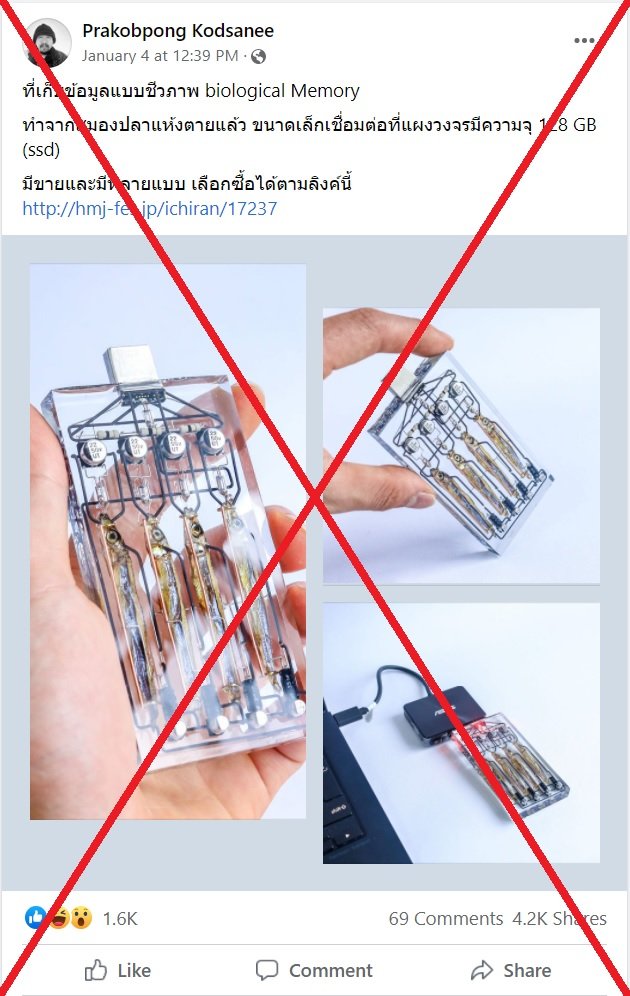 The same images have been shared alongside a similar claim on Facebook here and here.

"If this continues to develop, I believe External Hard Disk companies will be able to utilize dead pets' for memorabilia and usage", one social media user wrote in response.

"The world has gone too far", said another.

A reverse image search on Google found the images in the posts were previously shared here and here on Twitter by a Tokyo-based user called @ni28_xp.

AFP reached out to the Twitter user who confirmed: "Yes, the 'biological USB memory stick' is my product. It is a kind of joke goods."

The Twitter account also links to an online shop where the USB sticks are sold here and here.

The product description reads in part: "This product is a device that expresses the future technology concept of 'direct input and output of data between computers and living brains', which is impossible even with modern science and technology."

'Technology does not exist'

"The USB device is able to store data as it says, but the fish brain part seems to be an aesthetic addition. From my knowledge, this technology does not exist," Chatchawit Aporntewan, an associate professor at the Department of Mathematics and Computer Science at Chulalongkorn University, said on January 7.

"If we cut off blood circulation to a person's brain for a period of time, that person will experience partial memory loss after he regains consciousness," Chatchawit added. "Therefore, the brain of a dead fish is also not able to store any information."

"If you look at the images carefully you can see that all products have one thing in common, which is the USB connector. That is where the data is actually stored, the fish is only added for cosmetics," Jessada Denduangboripant, an associate professor at the Department of Biology at Chulalongkorn University in Bangkok, said on January 7.