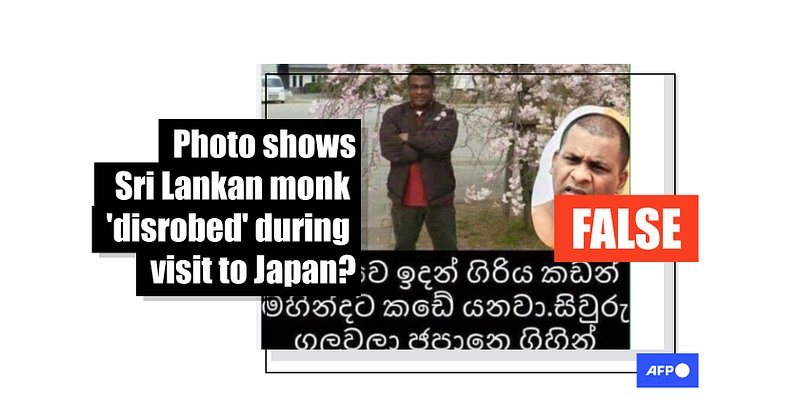 A photo has been shared on Facebook alongside a claim it shows controversial Buddhist monk Galagoda Aththe Gnanasara "having fun" while "disrobed" in Japan. The claim is false; a representative for Gnanasara's group said the reports were inaccurate, while the woman who posted the original photo said it showed her father, a Sri Lankan chef.

The Sinhala-language text superimposed on the post reads as: "Sings praise of Mahinda until he loses his voice, while in Sri Lanka. Then he disrobes, goes to Japan and has fun. This is not good Gnanasaera thera".

'Gnanasaera thera' refers to Galagoda Aththe Gnanasara, a radical Buddhist monk in Sri Lanka who has been accused of hate crimes against Muslims. He is also leader of hardline group Bodu Bala Sena, or Buddhist Force. 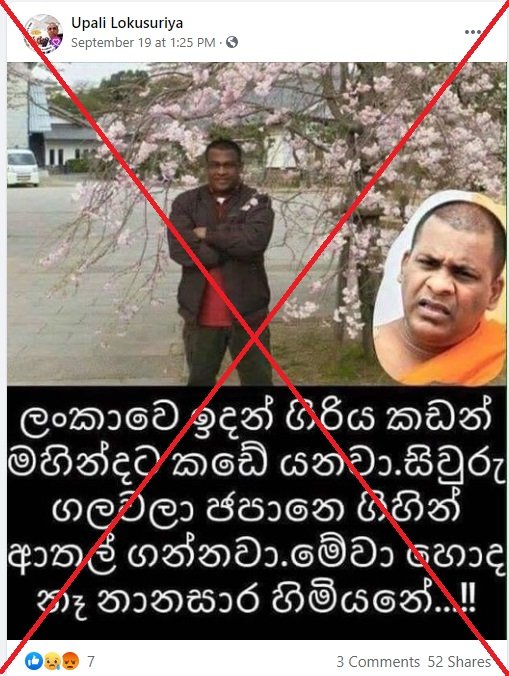 In May 2018, he was convicted of two counts of harassing and intimidating a woman whose husband was abducted in 2010 by state forces.

A Presidential Commission of Inquiry appointed to probe the 2019 Easter Sunday bombings recommended criminal charges against Gnanasara for his role in the 2014 anti-Muslim riots.

The same image was shared in similar Facebook posts in 2021 and previously in 2016.

AFP found a comment on one of the posts that said it was "fake".

It reads: "Happy birthday dad. miss you a lot #somuchlove". 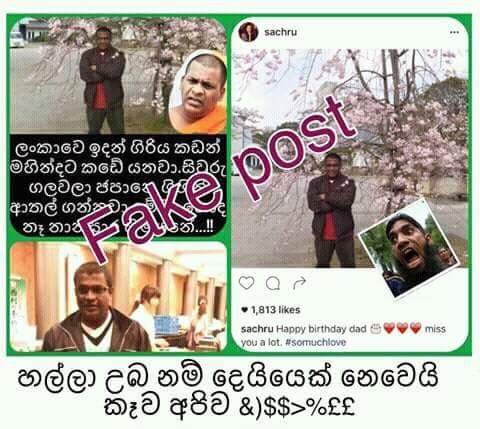 This comment was left in a 2016 post that claimed the image showed Gnanasara thera, indicating the image was not him

AFP contacted Instagram user Sachini Ruwanthika, whose profile was shown in the image shared in the misleading posts.

Sachini said the photo in the misleading posts shows her father, Sunil Godahena.

She also shared an image of her father (left) meeting Galagoda Aththe Gnanasara (right) in Japan. 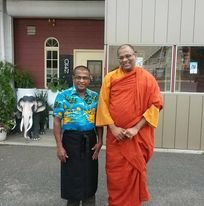 Sachini shared photograph of when her father met Gnanasara thera.

A spokesperson for Bodu Bala Sena also said the photo in the misleading posts does not show Galagoda Aththe Gnanasara.

"This photo has been circulating for several years claiming to show Gnanasara thera. But this is not him and shows an individual Gnanasara thera met during one of his trips to Japan," the spokesperson told AFP.