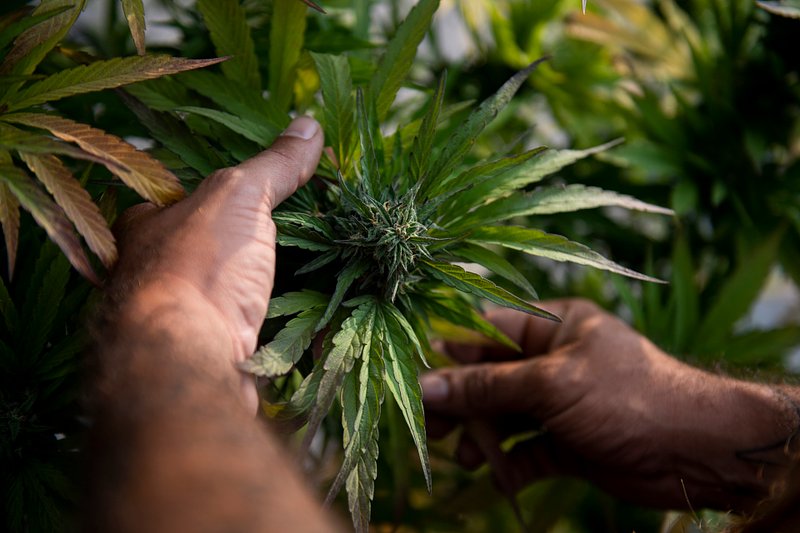 Social media posts claim a person would have to smoke more than 1.3 million joints in 15 minutes to overdose on marijuana.

The posts also suggest that the drug is safer than water. While it is virtually impossible to die from cannabis use, experts say excessive consumption can cause a variety of adverse effects, and dismissed the idea that marijuana is safer than water.

"You would have to smoke 1,360,000 joints within 15 min to overdose on marijuana," says an image in an October 5, 2021 Facebook post that is accompanied by text claiming that the drug is safer than water. 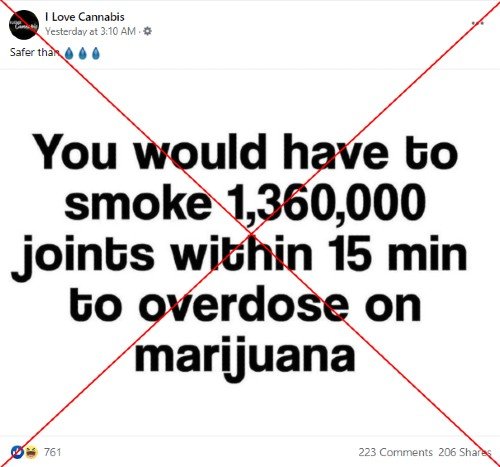 "While cannabis is not associated with the risk of overdose death posed by substances such as fentanyl and methamphetamine," non-fatal overdoses are a possibility, she said.

"The toxicity of smoked cannabis will depend on the concentration of THC in the product, not the number of joints." Adverse effects for high potency products "can include seizures, heart dysrhythmias, acute psychosis, and cyclical vomiting."

Einstein also addressed the claim about water, saying: "Water is necessary to sustain life, and cannabis can result in adverse drug effects. Cannabis is not safer than water."

Dr Peter Grinspoon, a cannabis specialist and physician at Massachusetts General Hospital, agreed. "The claim that marijuana is safer than water is obviously uninformed nonsense."

"The claim a person 'would have to smoke 1,360,000 joints within 15 minutes to overdose on marijuana' is a histrionic way to get across an important point -- it IS virtually impossible to consume enough cannabis to fatally overdose as there aren't cannabinoid receptors in the brainstem, so, unlike opioids you don't stop breathing with an overdose."

However, "you can 'overdose' (e.g. have a severe anxiety reaction and end up in the emergency department) with much lower doses, even with a puff or two if you have a bad reaction -- you just don't fatally overdose," he said.

"It almost goes without saying that it is impossible to smoke that much cannabis," he said, referring to the social media posts. "A person would likely die of asphyxia or carbon monoxide toxicity in the attempt."

"I believe that the provider of the quotation probably meant to say 'fatal overdose,' rather than referring to any overdose. While it is true to say that there is no dose of cannabis or tetrahydrocannabinol (THC) that will cause respiratory arrest and death, it is clear that too much THC produces a variety of adverse events that can include anxiety, delusions, and what is called a temporary toxic psychosis," Russo said.

Doses as low as 15 milligrams can trigger these effects for some people, but "this is far from universal," he said.

Cannabis expert Chris Conrad pointed to figures cited in a September 1988 court ruling about the safety of marijuana as a possible inspiration for the posts.

"Simply stated, researchers have been unable to give animals enough marijuana to induce death," the "Findings of Fact" section of the ruling said. "A smoker would theoretically have to consume nearly 1,500 pounds of marijuana within about fifteen minutes to induce a lethal response."

Conrad said one might argue that "today's cannabis is more potent than the cannabis of the late 1980s, however there is no data to suggest that it is any more toxic, so those figures should be consistent to today."