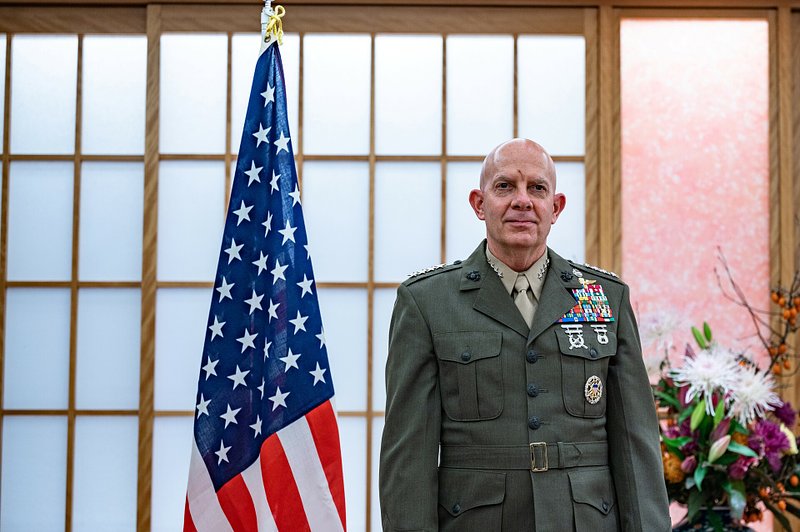 Claims that the commandant of the US Marine Corps, General David Berger, described Covid-19 jabs as "potentially hazardous" are false.

Social media posts claim the commandant of the US Marine Corps, General David Berger, described Covid-19 jabs as "potentially hazardous" and rebuked mandatory shots for his troops. The posts circulated online after the Pentagon said all members of the US military would be required to be vaccinated for Covid-19 from mid-September. Some social media users appeared to believe the posts showed Berger's genuine remarks. But the purported comments in fact originated on a satirical website.

"Gen. Berger rebuked US Defense Secretary to protect all US Marines from being guinea pigs," reads the caption of this Facebook post on August 11, 2021.

The text above an image of Berger reads: "Marine Corps General David H. Berger on Monday Rebuked Def Sec: "No Mandatory Vaccinations for My Marines".

"Under no circumstance will Marines be compelled to take a potentially hazardous vaccination that the FDA won't even fully endorse". 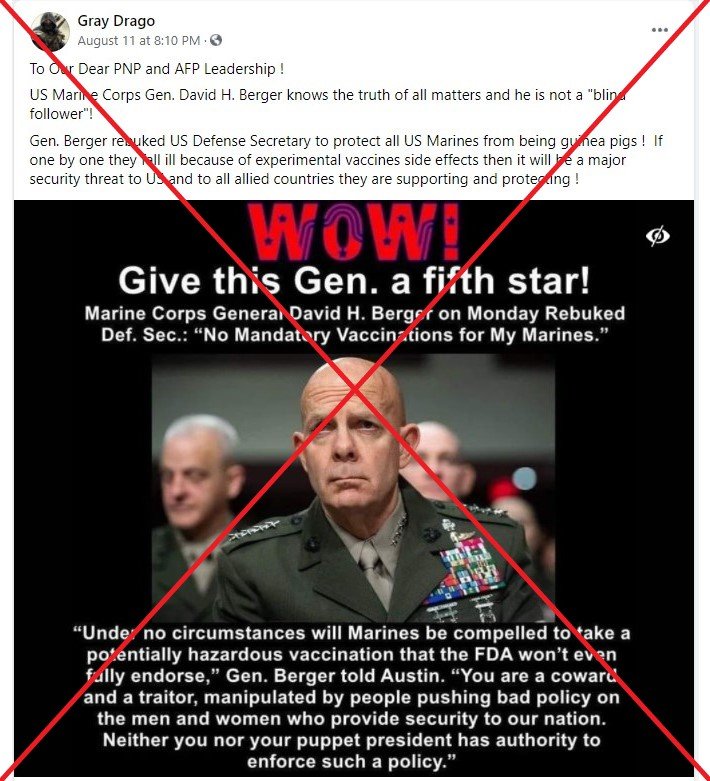 A screenshot of the misleading post taken on September 9, 2021

The post circulated online less than two days after the Pentagon said it would make Covid-19 vaccinations mandatory for all members of the US military by mid-September, amid an alarming surge in infections by the Delta variant.

AFP reported on the development here.

Comments from some social media users in the Philippines indicated they thought the posts included Berger's genuine remarks.

"That's the stand our generals should also make to save the lives of our armed forces," another wrote.

But the posts are misleading.

Keyword searches on Google found the purported remarks were originally published on US site Real Raw News on August 10, 2021.

The website features a disclaimer that says it "contains humor, parody, and satire".

Below is a screenshot of the disclaimer:

AFP found no credible news reports that Berger made the alleged remarks.

A spokesperson for the US Marines told AFP the posts were baseless.

"The posts you have referenced are in no way factual," the spokesperson said on September 8.

Berger in fact received a Covid-19 jab in late December 2020 and encouraged his troops to get vaccinated.

I received my #COVID19 vaccination today. It was great to see many frontline medical workers getting their shot as well. As the vaccine becomes available, I encourage all Marines and their families to get the shot to slow the spread of the virus. pic.twitter.com/nno2FxXDth