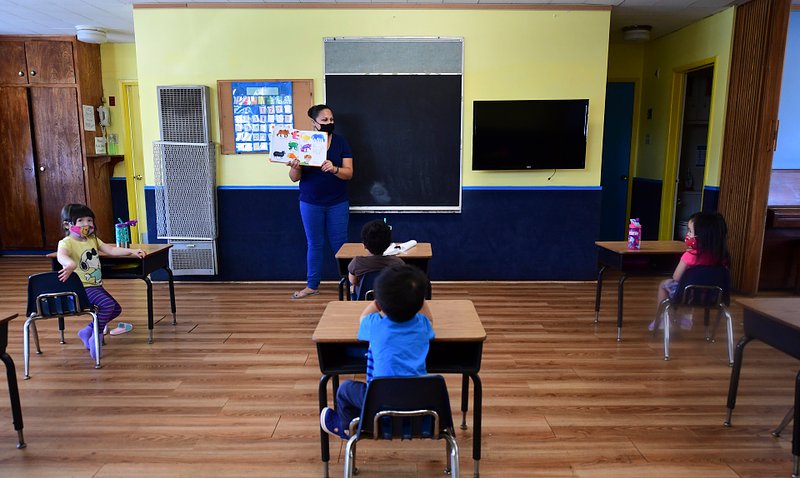 Posts purporting to show alarming laboratory results from tests carried out on children’s masks have been shared more than 1,300 times on Facebook by anti-lockdown groups who claim the findings are scientific evidence that masks cause harm. But experts have dismissed the reports that appeared on social media as incomplete and lacking scientific rigour, pointing out that many of the “dangerous pathogens” on the masks are commonly found on human skin.

“Here’s what you’ll find in a child’s mask after a day at school. Warning: it’s not pretty,” begins the caption of a Facebook post published by a South Africa-based anti-lockdown group called PANDA (Pandemic Analytics and Data).

The post proceeds to list 11 pathogens purportedly found by a Florida-based testing centre on a small sample of children’s masks. The pathogens listed include the bacteria that cause pneumonia, tuberculosis, meningitis, sepsis, and food poisoning. 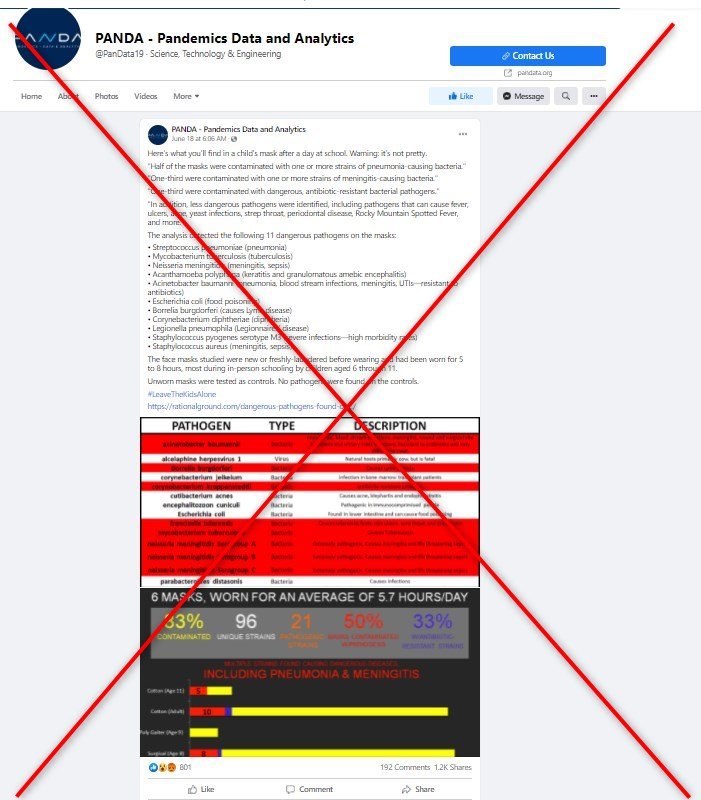 The same claim also appeared in this online article and in this press statement from Rational Ground, a US-based group also opposed to Covid-19 restrictions. The organisation published a copy of the lab results here.

They show samples submitted to a laboratory and describe the process used to extract and sequence the organisms present on the masks. 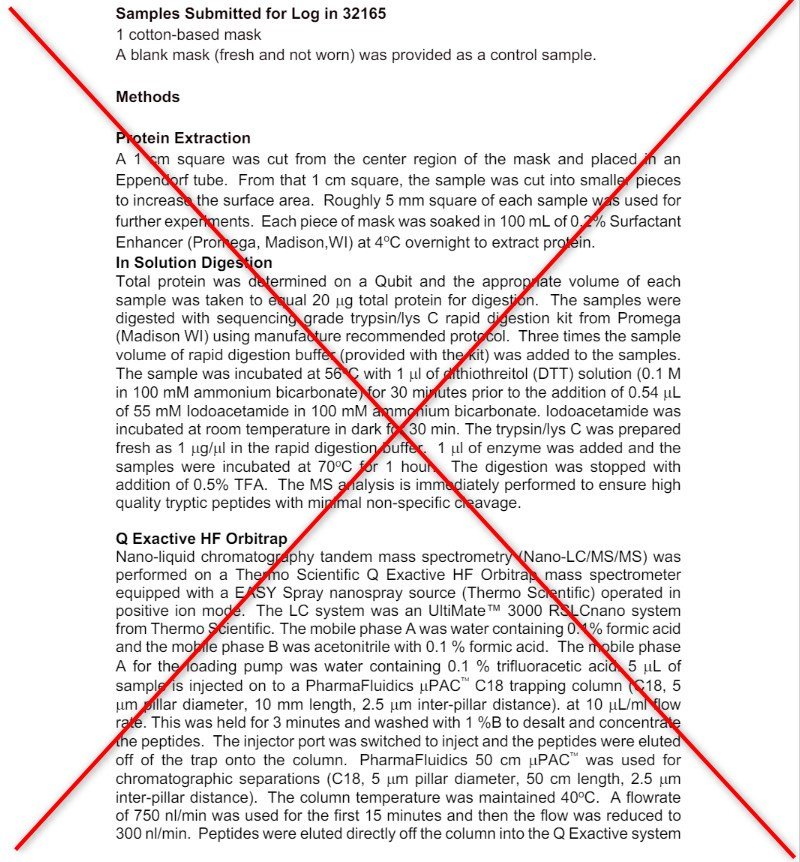 The masks were “new or freshly-laundered before wearing” and had been worn by six children aged six through 11 for five to eight hours, primarily at in-person schooling, according to the press release from Rational Ground.

The tests were conducted in Gainesville, Florida, by the Mass Spectrometry Research and Education Center at the University of Florida, which received the masks from the parents.

“The findings reported are what I reported in my analysis,” centre director Dr Kari Basso told AFP Fact Check. “We are a service facility that analyses samples for a fee. Anyone can submit samples.”

Each parent who submitted a mask for testing received the raw result data in an Excel spreadsheet, Basso said. AFP Fact Check was able to consult six Excel sheets -- including three of the mask samples, a "control" mask and a t-shirt -- that had been shared by the parents with local media Alachua Chronicle.

Experts have dismissed the results as misleading, adding that the “lab reports” were incomplete and fell short of the standards expected by the scientific community.

Physicians at Johns Hopkins All Children's Hospital reviewed the findings published on social media and concluded that they did not meet their standards for a lab report.

"The report has multiple grammatical and typographical errors, many of which we would not expect from someone familiar with microbiology or infectious diseases, and no references. We cannot confirm that any of that information is from a reputable source," spokesman H. Roy Adams told AFP Fact Check.

Dr. Benjamin Neuman, an expert in coronaviruses who chairs the Biological Sciences department at Texas A&M University-Texarkana, said the reports shared online had not published the full results found in the spreadsheets.

The complete results are less dramatic that what is being shared in the misleading Facebook posts, Neuman noted.

"The full results show clearly that the majority of data did not fit the narrative of masks making children sick, and was not reported," he said.

"I would conclude that this is an authentic and presumably competently-performed scientific test that is being very selectively interpreted by selecting unreliable but potentially alarming potential matches, while ignoring more confident, but non-sensical matches from the same test," Neuman said.

"The full dataset paints a very different and much less alarming picture than the data presented on the website."

The World Health Organization (WHO) described the tests as “pseudo-study”, adding that the pathogens described in the claims are found on the human body.

“Most of the germs cited in that pseudo-study are part of the normal flora of the nose: streptococcus pneumonia, staphylococcus aureus, Neisseria meningitidis… and normal gut flora like Escherichia Coli,” the WHO told AFP Fact Check.

Furthermore, some of the listed pathogens cannot survive on mask fabric.

“Some other organisms listed, such as Borrelia Burgdoferi, cannot be found on a mask, and cannot be transmitted by direct contact but only through being bitten by a tick.”

Neuman concurred, saying that many of these bacteria “are commonly found on healthy human skin. The simplest explanation would be that the bacteria came from the kids to the masks, not the other way round.”

When asked about the interpretation of results and the criticism of the study, lab director Basso declined to comment.

"I am not able to comment on if masks are harmful as it is outside my expertise. I simply provided the data for these families to take to their medical doctor for consultation.My position is this is preliminary data [that] is compelling that warrants further investigation," Basso told AFP Fact Check in an email.

Neuman further criticised how the results were obtained, using a method known as liquid chromatography–mass spectrometry (LC-MS/MS) that is used to identify organisms. The process separates individual components in a sample and sends them into a so-called mass spectrometer, which then separates gas-charged ions according to their mass to charge ratio.

“It looks at large molecules like proteins, smashes them into very small pieces, records the mass of each piece, and then searches through various databases to try to identify what they might have come from,” Neuman explained.

However, the results will vary depending on the margin of error and which database is used. This technique is “quick but not useful as the sole means of identifying disease-causing organisms,” he added.

“This approach is like trying to identify the make and model of a car by first exploding the car, and then comparing burnt scraps of metal from your car to scraps of wreckage from other cars. There are just much better ways to identify organisms.”

To identify bacteria or parasites, Neuman recommended culturing them to confirm they are still living organisms. DNA and RNA testing can also be useful for confirming types of organisms.

"If one was trying to examine the bacterial content of human clothing or skin, this is not an appropriate method to use."

WHO recommends that children continue to follow mask guidelines.

“While children are not at high risk of severe COVID-19, they are still at risk, and they can still spread the virus to older family members at home and in their communities. Masks are a key measure to help stop the spread of SARS-CoV-2, the virus that causes Covid-19, but must be used along with other measures such as good hand hygiene and physical distancing,” the WHO told AFP Fact Check. 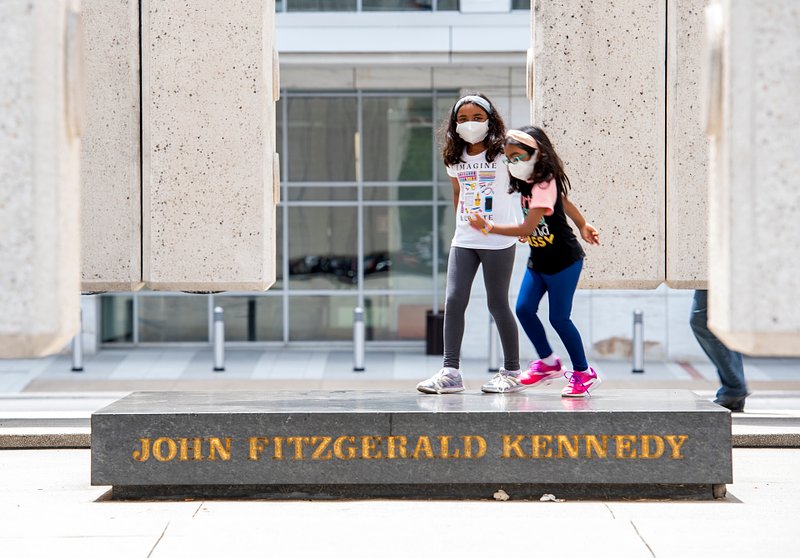 PANDA was founded by a group of international health, data and investment specialists demanding an end to pandemic lockdowns and certain social distancing protocols, such as wearing masks.