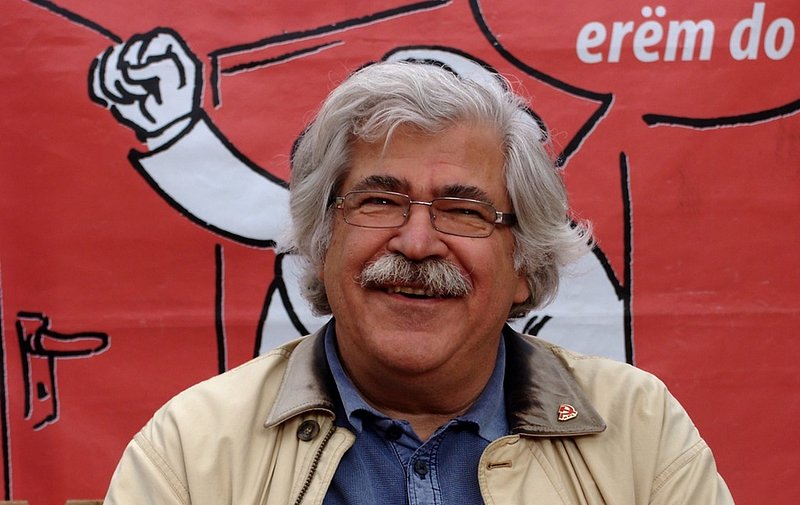 Ali Ruckert did not feel comfortable giving a video interview in English. Instead we have this Election Special as a written piece.

Could you introduce yourself to our audience?

My name is Ali Ruckert. I am president of the Communist Party of Luxembourg and editor-in-chief of the ‘Zeitung vum Lëtzebuerger Vollek’, the daily newspaper of our party.

What’s your experience of the working world before politics or outside of politics?

In the course of a long period of 40 years working as a journalist, there have been many occasions to be in contact with the ‘real life’, mainly the real working and living conditions of the people, as well as close relations with trade union activists – this is really the main motivation for my political activities.

Have you ever lived or worked outside of Luxembourg?

In the seventies, I worked as correspondent of our paper in Moscow for two years.

Where did your interest in politics originate?

It comes from my experiences, generated from the contacts with ‘normal people’. I grew up in a working family: my grandfather and father worked in the mining and steel industries, and they were always active in the trade union and Communist Party. My father, at 87 years old, is still one of our most active militants in KPL.

Why did you join this party?

I think KPL was and is the only political party in this country to fight for social justice, against capitalism and militarism.

I’d like to do my best for a useful and successful activity of KPL in our country, in the municipal councils where we are represented, as well as in the national Parliament, where we are striving to achieve a representation in the forthcoming elections.

What qualities have you got which make you a great leader?

For us, it’s not a matter of being a ‘great leader’. I was elected by the members of our party, and I’m concentrating all my efforts to fulfill the political mandate given to me. 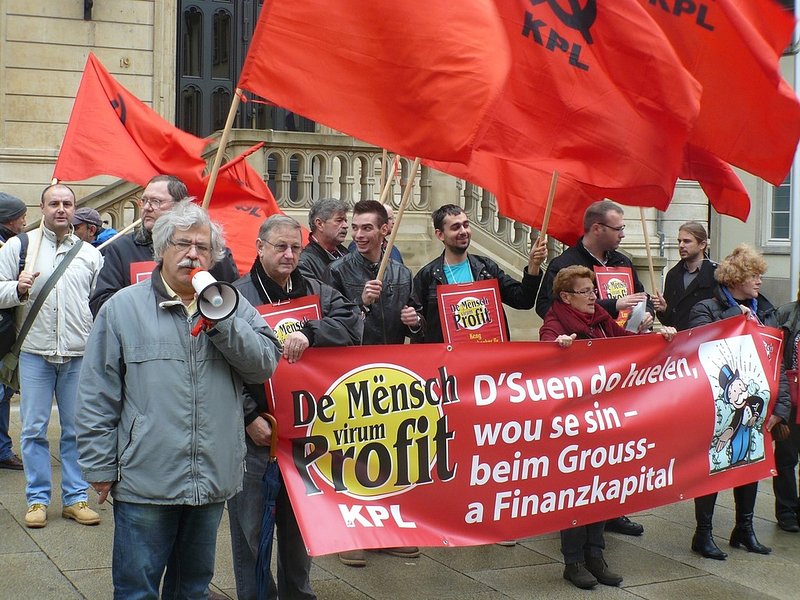 KPL - The Communist Party of Luxembourg

Could you tell us about your party and how it originated?

The Communist Party of Luxembourg was founded in January 1921, so it is one of the parties in our country with a long experience of political struggle. All our activities are based on the theory of Marxism-Leninism. Our main aim is to end the exploitation of men by men in the current capitalist society and to lay the basics for a society without exploitation, which we call socialism.

Our struggle is based on the positive as well as the negative experiences in the development of the Soviet Union and in the other socialist countries. We are part of the worldwide communist movement and we have close and constructive contacts with other communist parties, mainly with those in the neighboring countries Germany, Belgium and the Netherlands.

We are doing our best to permanently analyze the political, economic and social situation in Luxembourg – and on this basis to formulate political demands, like for example in the current situation the demand for a 20 per cent increase of the minimum wage, a better financial basis for the educational and the health system, for the construction of more flats with affordable rents…

With a view to the present developments in the world, we have to state that we are the only political party in Luxembourg which is consistently fighting for peace and disarmament. We are against purchasing a military transport airplane and other military equipment like a satellite or drones; we want our soldiers to come back from all so-called military missions abroad, mainly from Lithuania, where they are stationed just a few kilometers before the border with Russia and acting under the command of German officers. Our party stands for a complete nuclear disarmament, this means the abolishment of all nuclear weapons, no matter which country possesses them.

How many women in your party?

Women have played an important role in all the history of our party. At present, they are almost half of our active membership – as you can see also on our lists of candidates for the forthcoming elections.

When was the last time you had a seat in opposition?

Our party was represented in the national parliament since 1945 with up to six Députés. We lost our last seat in 2004, and we think now is the time for a come back.

You haven’t managed to gain a seat in recent elections.  Why?

Our party was obviously not strong enough to reach the necessary number of voters with our arguments. By the way, while all the other parties which are running now in the four electoral districts, receive financial support for their election campaign from the state, our party can count only those euros and cents that are given or collected by our militants.

Do you think you have a future as a party due to the way elections have gone for you in recent years?

One of our basic characteristics as communists is what we call ‘historical optimism’. A party without a future should not run in elections. We can see in many countries in the world, that communist parties are not only represented in parliaments, but also play an important role in society. Why should this not be possible in Luxembourg? By the way, the resistance struggle of our party against the Nazi occupation 1940 – 1944 is not forgotten by many people in our country.

What are your top three action points for Luxembourg?

-       secure working places for all with a salary which allows a normal living standard, including an increase of the minimal salary by 20 per cent

-       a program of housing construction, creation of construction companies owned by the state and municipalities, to construct flats with affordable rents

-       an active policy of peace, disarmament and detente, the abolishment of the purchase of military equipment, withdrawal of Luxembourg troops from abroad, signing of the United Nations Organization treaty on nuclear disarmament

Luxembourg has a long tradition of migration, migrant workers and their families have played an important role for the economic development of our country. Most of those migrants have been successfully integrated in our society. Foreigners coming to Luxembourg with the idea to live here should be given all opportunities to become integrated, including the possibility to become Luxembourg citizens.

On the other hand, we have a critical point of view concerning the present so-called migration policy of the European Union. Our country should develop another policy, that means to fight the real reasons for the migration of thousands of people mainly from Africa and from the Middle East. These reasons are mainly the wars and military conflicts, and furthermore the increasing underdevelopment of many countries due to the economic exploitation by member states of the European Union and the USA. Financial means have to be used for a real economic development of these countries, not to support the business of European and other monopolies, since their main interest is only achieving high extra profits.

Our party also opposes the austerity policy of the EU and the governments of EU countries. We should not forget the immense migration inside the EU, which causes the loss of millions of people who are migrating either to higher developed EU countries like mainly Germany, or to non-European countries.

How can your party cater for people like us, when we don’t have the right to vote in Luxembourg until after we take the citizenship and language tests?

We are of the opinion that all foreigners living in Luxembourg and wishing to stay here should have an easier access to Luxembourg citizenship. Of course, an important precondition is the readiness to be integrated in the country’s society, as well as a real interest to take an active part in the life of the society, including the wish and the readiness to take part in elections. But we should not forget, that you already have the right – after a certain period of living here – to vote for the municipal council and in the elections for the European Parliament. Unfortunately, too many of the foreigners living here do not make use of this right.

How do you think politics is changing across Europe at the moment?

At the moment, we see several dangerous developments across Europe and in the world. There is, first of all, a trend towards militarization, the increase of tensions and military confrontation, bearing a serious danger of a new war.

On the other hand, we see a dangerous right-wing development in many countries of the EU. The principal reason for this is – in our opinion – mainly the lack of good prospects of many people for their future, caused by austerity programs of the governments. The chaotic policy of the EU and their member states concerning migration is a kind of catalyzer of this trend, since the non-regulated arrival of many migrants – the majority of whom have no chance of any kind of integration – is promoting an aggressive, xenophobic, racist mood.

If we want to change this, if we want to prevent a new revival of fascist regimes in Europe, we have to change the basics of today’s policies. As Bert Brecht, the famous German poet said after 1945: ‘The womb is still fertile’. In our analysis, fascism was born by the capitalist society. As long as this capitalist society exists, the danger of fascism will not be eliminated.

How do you think Luxembourg is perceived on a global stage and what would you and your party bring to that?

I think many people outside Luxembourg do not know anything about our country. There is probably a view that Luxembourg, as one of the founder states of the European Union, is one of the richest countries of the EU, and one of the ‘tax paradises’. People in neighboring countries might see Luxembourg as an area of low gas prices and high wages.

Our party is explaining to all our friends and comrades all over the world, that Luxembourg is nothing but a ‘normal’ capitalist country, that the people here are faced with the same problems as most of the people in other capitalist countries. And that there is at least one political force which has the necessary ideas to change this. 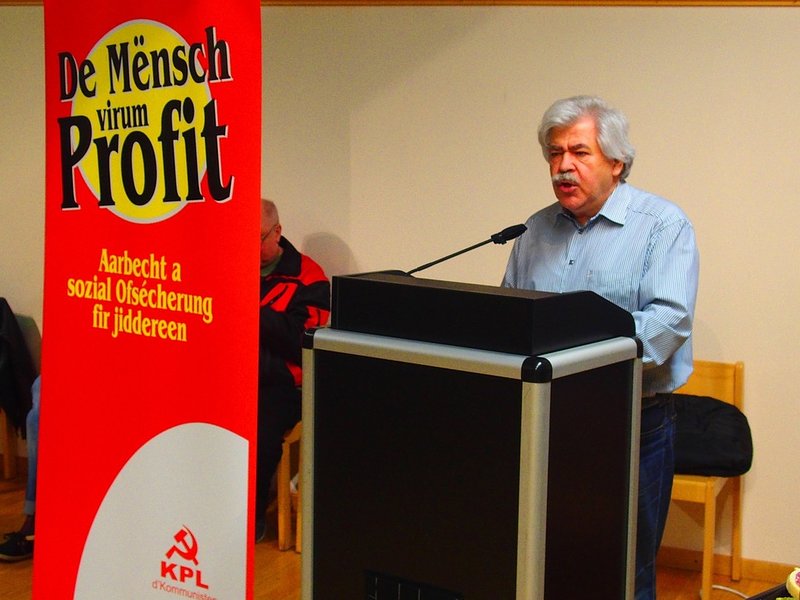 Favourite music, or type of music

If you weren’t being a politician what would you be?

Liberté, egalité, fraternité – for all, also for the working class

Your motto / slogan by which you live your life?

Let’s be optimistic and do the impossible

KPL is fighting against social injustice, against exploitation of men by men, for a new society, which in our opinion can only be socialism.

Many of the political websites here are not in English. For fairness, we have asked similar questions of all leaders. The interviews are being published in the same order as the parties appear on the voting lists.

For more information on how the election process works in Luxembourg go to Knowledge Bites Election.