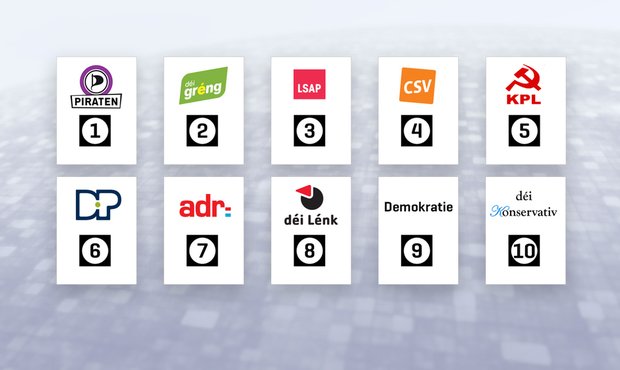 Election campaign month has officially started! On 14 October Luxembourg citizens will go to the polls.

For the last five years Luxembourg has been governed, for the first time ever, by a trifold coalition composed of the Democratic Party (DP, Demokratesch Partei), the Socialist Party (LSAP, Lëtzebuerger Sozialistesch Aarbechterpartei) and the Green Party (Déi Gréng).

What about the past?

For most of Luxembourg’s electoral history, the country has been lead by CSV (Christian Social People's party, Chrëschtlech Sozial Vollekspartei) in coalition with one other. Indeed, right now, it is still the CSV who hold the largest number of Députés (members of parliament) in the Chambre des Députés (Luxembourg’s parliament).

Luxembourg citizens have to vote. It’s compulsory. They will choose 60 Députés on 14 October and, depending on how those numbers sit, a new government will form. It is most likely to be a coalition once more, but possibly not with three parties.

How is Luxembourg divided into constituencies?

There are four, with proportional representation for each constituency.

You can only vote for candidates in your constituency. You’ll be able to vote for individuals, lists of party candidates, or a mixture of both—a tiny bit complex, but not too taxing.

How many parties are there?

Well, there are ten parties in total, but a bit of an issue with the Demokratie party, in that some people appear on party lists and don’t want to be there.

On top of this, voters can opt for The Pirate Party (Piratepartei Lëtzebuerg) and the Communist Party (KPL, Kommunistesch Partei vu Lëtzebuerg). Déi Konservativ will offer candidates in the South only. The Demokratie party will present lists in the South and Centre.

How can I find out more about the parties and leaders?

Watch our series! Starting on Monday 17 September, we will bring you video interviews with all the party leaders! Make yourself a cuppa, pour yourself a glass of cremant, put your feet up and get a feel for who might forge the way ahead for Luxembourg in the next five years. Irrespective of whether you can vote or not, who leads Luxembourg will affect us all. Plus, we might bump into them here and there - it is Luxembourg after all - and if so, would be good to put a name to the face!